Designing Hardware for the Internet of Things

Jawbone was one of the first major players in wearables. In fact, the company has been creating lifestyle hardware for over a decade. But founder and CEO Hosain Rahman admits that the Internet of Things is a bit of a mess and says they’re looking to change that.

With each of their products, Rahman said, “I always like to start with the broadest thinking … We think that the conversation has shifted even beyond design into beauty. It’s the intersection of engineering meets beauty. The whole point is to help people have a better life with technology.”

The process at Jawbone stays really big picture until it starts to get to the end, and that’s part of what gives them an edge. From their UP 24 fitness tracker to the Jambox Bluetooth speaker, Jawbone has continued to make gadgets and wearables that are at the top of their game.

Rahman spoke as part of Y Combinator founder Sam Altman’s How to Start a Startup series on how Jawbone has continued to design hardware products that people can’t live without. 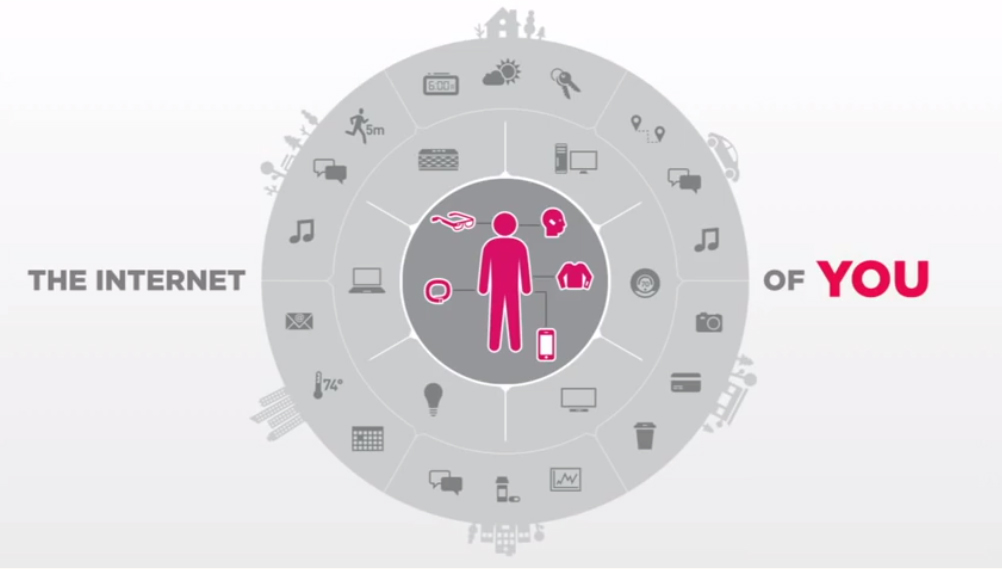 Rahman said that most of the chaos surrounding the Internet of Things has to do with the fact that all of these apps and gadgets that we’re plugged into aren’t talking to each other, so they’re confined to their own feature set.

“It’s really confusing for the user,” he said. “We think that there is a desperate need for an organizing principle around all of this. This is the core of when we start to think about how we build and opportunities to create products.”

The team continues to look forward to ensure that they’re not just creating hardware of the moment, but of the generation. Rahman explained:

“What happens when we can dream in future? We really try to live into tomorrow … [and] the thing that we build today is a gradual stepping stone to graduate users.”

Here are the two main principles Jawbone lives by:

It’s not about the things. It’s about the users. “What we believe is that when you have things that are on your body 24/7, they become a perfect context engine for everything in the world around you.”

You have to be good at the full stack. Rahman said the “full stack” is the combination of software, services and data. When these three are exceptional, he said you can unlock the potential of something that works with the user and the rest of the world.

Everything Is a System

For Jawbone, their process of creating new hardware is to keep things super creative and open for as long as they can. Step by step, they narrow in on their vision, all along keeping in mind that what they’re creating is going to become part of a larger system. 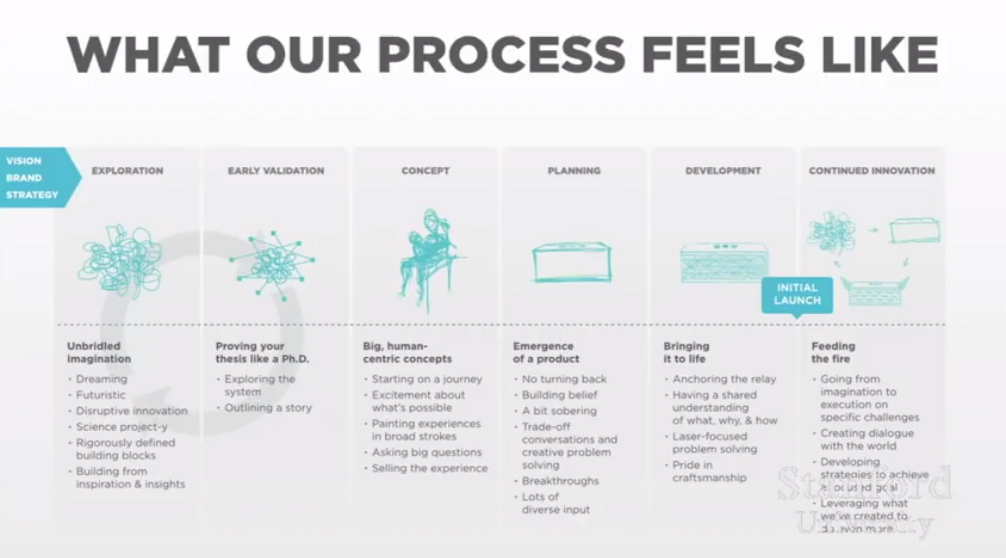 This is the brainstorming phase where the team dreams big and imagines products to fit into the direction that they see the world going. They think on what the brand stands for and how they can disrupt the market.

The concepts that they’ve dreamed up really start to hit paper. At this point, they’re predicting where the product can fit into the market and attempting to prove their theories.

They continue to get closer and closer to brass tacks by mapping out the experience and how they’re going to tell the story. They’re really starting to explore what’s possible.

They start asking themselves, “What are some of the tradeoffs we’re going to have to make? What are the constraints?” This will help them further focus the product.

During this phase, they merge their teams and talents and start to learn from their users.

They launch the product and learn from users. They see what the users think and where that stands in comparison to the direction they predicted.

To really explore their products further, Jawbone uses what they call “Demo Friday.” They treat it like first-round funding and get people to pitch their ideas in real life.

It’s All About the WHYs

To stay grounded in your company’s mission statement and ensure that your end product is solving the problem that you set out to solve, Rahamn said you have to keep questioning yourself:

From Research and Development to Industrial Design, each team has to take these questions into consideration as it pertains to their expertise. During the concept phase at Jawbone, Rahman said that they take the project to their Product Experience team, which would be a conventional design team anywhere else. Even though they’re not building the hardware, their job is hugely important.

Rahman said, “We have writers on that team. Storytellers. We have ID people who are genius creators. We have amazing app level designers, graphic designers, everything. It’s all one team and we call that product experience. Their job is to unify us as one organization.”

When your project is truly successful, you’ve resolved all of the questions and problems you’ve been reiterating since the beginning of your process. Rahman calls them the Hero Experiences. When you’ve resolved those, then you can start to examine your competition and find product-market fit.

This is where those tradeoffs you were considering before really start to come into action. Do you sacrifice size for battery life? Do you use that material if the color you want isn’t available? In other words, it’s time for the nitty gritty and final decision making.

But Rahman says you still have to keep in mind, “Does it actually cross enough things off our list? Does it meet that minimum viability?”

“We don’t like to do one-off things,” he added. “We have to see a broader vision. This is part of the creation experience. We look at where we think the world is moving and think about how this [product] is going to be a stepping stone to that ultimate end vision.” 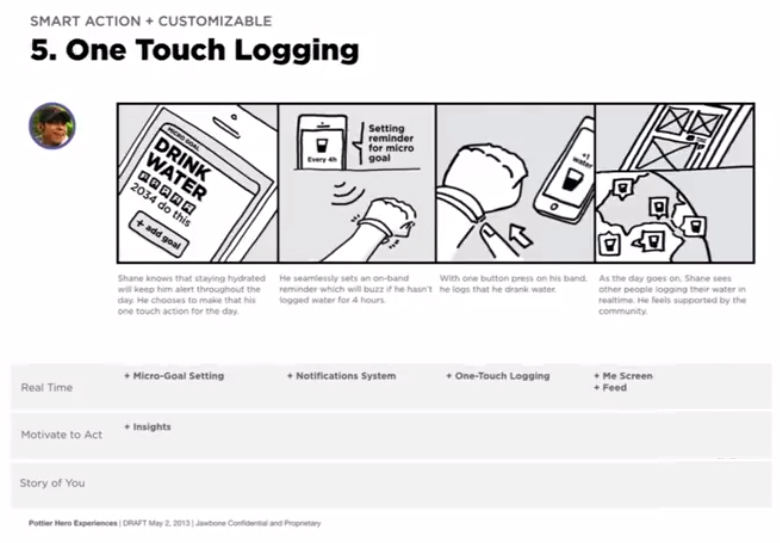 As recently as five years ago, Rahman said that no one wanted a Bluetooth speaker for $199; there simply wasn’t a market for it. But they waited and questioned users. He said that it’s important not to ask them leading questions, because at the end of the day people will tell you what you want to hear.

“You have to separate … questions that you can ask to help make you smarter about your thesis versus trying to get somebody to validate it for you. That’s the real separation. No one’s going to tell you what to build. If they do, then they should do it and not you. You’re the one who’s making that decision, you’ve got the thesis, you’ve got the creative idea, you’ve got the innovation. You’ve got to use these people to help you make it better and to refine your thinking.”

To refine your thinking, you’ve got to storyboard. Rather than just talking about the user story, draw it out. It doesn’t have to be in extreme detail, but just enough to see movement for movement what their process looks like so you can ensure that your product isn’t being forced in a direction where it’s not welcome.

He said that creating a storyboard helps to map out constraints: “My experience has been constraints are really great because they serve as opportunities to resolve, to refine, to simplify, and push you to find the right answer that will solve the user problem in the simplest way.”

The System Is a Flagship

The end goal for all of Jawbone’s products is to fit within their system and the direction that the world is going. Rahman said that they ask themselves, “’What is the user problem that we solve through this experiment?’ Whether it’s in hardware, software, data, platform, whatever it is, once we solve it, people can’t live without it.” To create this hardware that people can’t live without, their system is key.

He said that when they work within their system, “[the hardware gets] to a level of emotional connection where you feel that without it you’re lost … Those are the principles that govern all these things. We have to keep asking ourselves those questions. Is it doing that?”

With the system perfected, they can start to streamline the chaos in the Internet of Things and really create an intuitive, fluid experience.

You can watch the video and read a full transcript of Rahman’s lecture here.

Featured image was taken from the video of Hosain Rahman’s lecture at Stanford.