Sometimes the best therapy for a bad moment is having someone say, “Yeah that’s the worst.” That’s what the app BUMR provides.

Take a look at your most recent Instagram post and think about why you shared that picture. Chances are, you shared it because the picture was beautiful, you were doing something awesome, or the witty caption opportunity was too good to pass up.

Being able to curate your life in this way across social media can be empowering, if not a little self-centered. But we’ve all fallen victim to the other end of the spectrum: scrolling through pictures of other people’s lives and thinking, “Wow, my life sucks.”

BUMR is a place where you can not only embrace your life’s suckiness, but that’s essentially the whole point.

In founder Julie Drazen’s words, the BUMR app is “a place where you can share your little bumps in the road and support your friends through theirs.”

Instead of scrolling through life’s perfectly posed moments, on BUMR you share and scroll through moments like getting a speeding ticket or finding out a restaurant is out of mozzarella sticks. No filters. No posing. Just support of the BUMR community through comments and “good energy zaps.”

Drazen talked to me about creating the app and why the BUMR community is actually a pretty positive place. 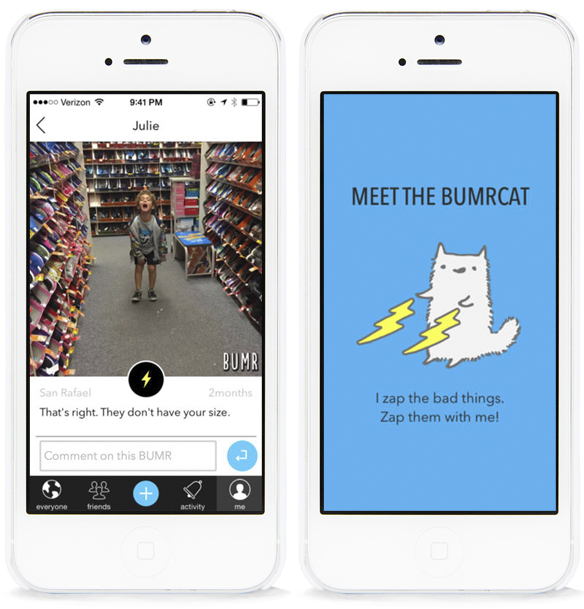 Drazen’s background isn’t in the tech world. She’s a documentary filmmaker, who was “bitten by the tech bug,” after taking time off to move to San Francisco and have her son.

She started looking at social networks and apps through her documentary filmmaker lens and found that there was something missing.

“I felt like there wasn’t any real crossover between the film world and the app world,” Drazen said. “There were a lot of technical people building apps, but not a lot of storytellers — or if there were, I couldn’t find them.”

She wanted to encourage people to tell more interesting stories that — just like a documentary — weren’t focused solely on life’s high points, but explored the low points as well. To get this more well-rounded view, she didn’t actually start with BUMR. She started with an app called Katchall.

Katchall was a multimedia project that captured the highs and lows of your day with photos, videos, text, and music. As Drazen put it, “Life isn’t all about vacations and rainbows … there’s more going on.”

Your Facebook audience may not always be willing to listen to all aspects of your life, though. “If you’re having a bad day and you go onto Facebook, you feel like your life sucks and everyone else’s life is better than yours,” she explained.

Katchall was a way to get a more complete view of your life, but at the last second their funding fell through. That’s when Drazen decided to pivot, and BUMR was born.

Drazen was thinking what most people might start thinking when creating an app that focused on life’s low points: “I thought there was something really interesting there, but how do we find a lighter way of doing that and how do we again help people find the light in the darkness?”

Before you even open the app, the name goes a long way to give it a tongue-and-cheek feeling. The bright color scheme and the character of the “BUMRCAT” (which zaps bad things) also help to give the experience a bit of levity. Still, this isn’t an app for you to poke fun or laugh at other people’s low points.

One of Julie’s favorite personal BUMRs is a picture of her son who was throwing a fit in the shoe store because they didn’t have his size.

This was actually really cathartic for Drazen. People on the app quickly identify with your pain and you start to realize that you’re not the only one having a crappy time.

“Just the act of taking the photo, kind of made me see the other side of it. I was more objective. I wasn’t so much in the moment, so that kind of gave me some relief. And then posting it, was the next level of that.”

Drazen said that there are other sites out there that share this concept like FML, but they’re not as visual and they also allow for a lot of anonymity, which in turn, leads to a lack of accountability. Drazen said that this can lead people to say anything just for attention, even if it’s not true.

With BUMR, she explained, “You can be slightly anonymous if you want to be, but it’s really more about bonding with your friends over stuff and supporting each other.”

She’s finding that, as the content evolves, it gets funnier and people are really finding humor in the parts of life that feel like the absolute worst. She said that the process of posting the photo is part of accepting the event and then letting go of it. 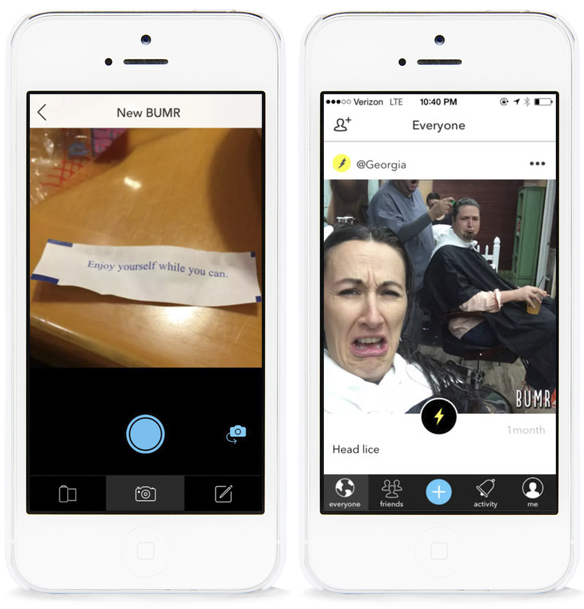 When the Katchall funding didn’t pan out as expected, her team had to find jobs elsewhere. Rather than build a whole new team, she turned to ThinkApps to build BUMR. She said it was a different experience than she’d had before.

Instead of working in an office with her team everyday, she was working with the ThinkApps team in the US and overseas, with communication between US and Ukraine liaisons. She said it felt nice to have the support of a team around the clock, even after launch for those inevitable bug fixes that pop up.

With the design of BUMR, Drazen wanted to give the app some lightness, but also let people feel comfortable sharing more serious things.

This is really important because, when you share a photo or a quote, you’re not sharing with a set group of people, but instead the entire BUMR community. She’s letting the users really guide and create the tone to let it evolve naturally into what they need from it.

Right now the app is pre-launch so the community is still small. The growth thus far has been solely based on word-of-mouth and users are really active — over 30% come back on a daily basis.

Drazen believes that people keep returning to this niche app because “it’s a nice respite from the perfectly groomed children, 5 star vacations, and false sense of perfection that pervades social media today. People come to BUMR to see real life.”

“This isn’t just about one person,” she said. “It’s really about a community of people who don’t take themselves too seriously and want to be honest.”

It’s a community based on honesty and that extends to the lack of filters and photo-editing features. The in-the-moment, raw feeling of these photos just exudes authenticity.

“You identify with this stuff … This is familiar … This is real life. Nobody here is showing off. No one is posing. No one is taking an hour taking the best selfie,” Drazen said.

After all, you can’t put a filter on the moment when it’s happening, so BUMR is a way of helping you to really accept that it’s happening without any possible way to sugarcoat it. And then, of course, get some love from the community to help you cope.

Gearing Up for Launch

The app has only been in the App Store since mid-March, and right now Drazen is gearing up for the official launch.

She has plans for new features like adding video and groups, but for the foreseeable future, she’s keeping things minimal.

She said that she learned a lot from her all-media approach with Katchall. “That was my education before building BUMR … realizing it’s so important to start super simple so it’s really easy for people to understand and use.”

She’s also planning on launching an Android version within the next quarter. But until then, if you’re on an iPhone, go download BUMR to become part of a community that’s there for you even when it’s not #ThrowbackThursday or #SelfieSunday and you’re not posting an adorable #OOTD.

All images were provided by BUMR.