Versame Is Creating the First Wearable Education Device for Children

Two years ago I was living and working in London. I had a stimulating job and great bunch of friends, owned a house, and my family was less than 2 hours away. I seemingly had everything, yet I was restless.

The answer? For me, it turned out to be getting a Master’s degree at Stanford.

It provided the chance to take time out and reflect on the next chapter of life, immersion in the vibrant hotbed of Silicon Valley, and, as an added bonus, the sunshine of California.

Fast-forward two years, and today I am the cofounder of a startup, working out of the garage where Nest was founded, and living with my American fiancé in the studio where a host of other startups began life.

And, assuming I can navigate the visa challenges the US is throwing at me – that’s a whole other story – I intend to call California home for the long-term. 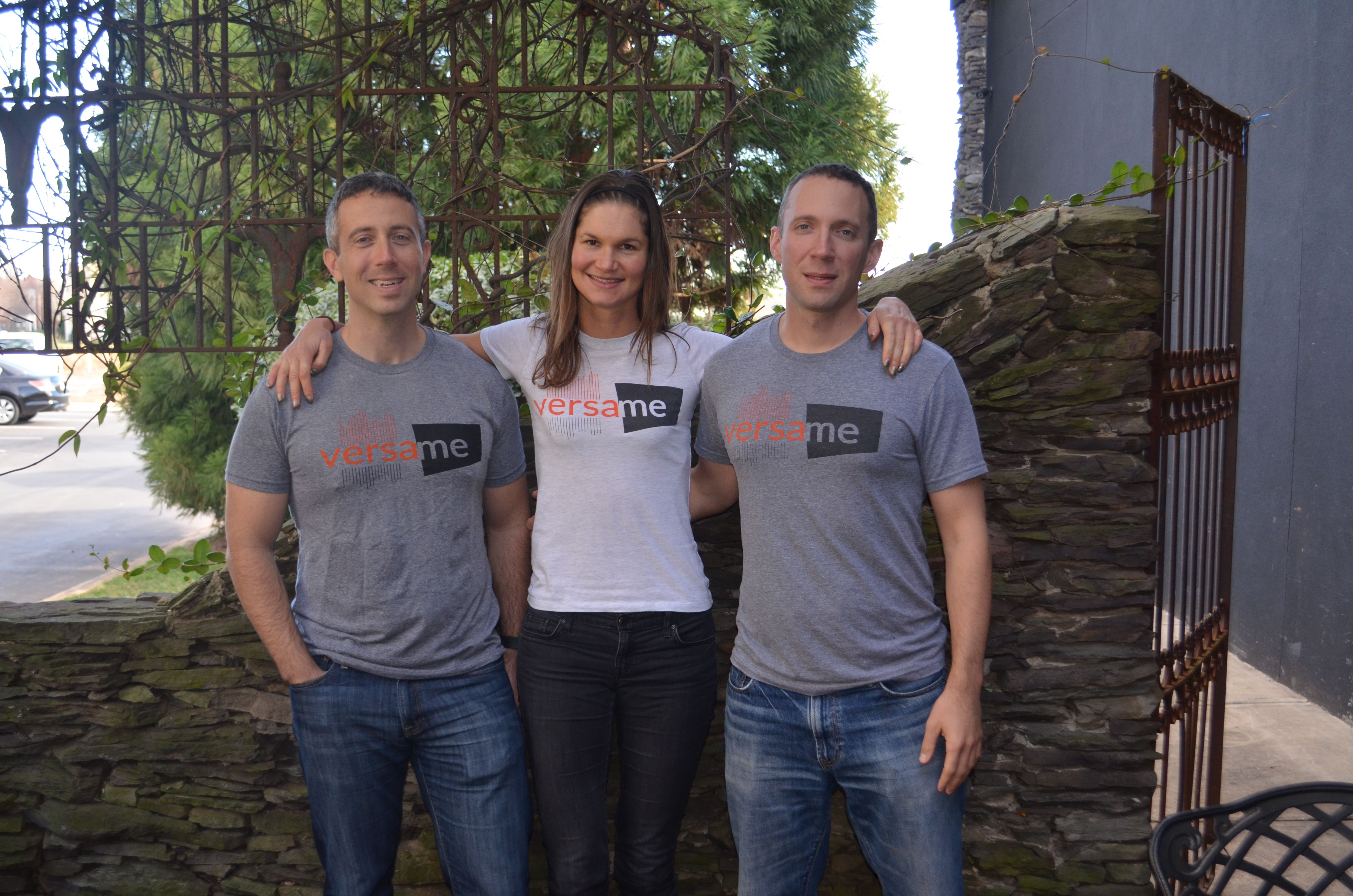 Me and my Versame cofounders

While at Stanford, I met my cofounders, a pair of serial entrepreneur brothers who served with the US Army in the Middle East. Together we are building Versame.

Versame is on a mission to transform early childhood education worldwide. Inspired by research, we are building a wearable device that counts the number of words spoken to babies and children.

Studies have conclusively shown that the number of words spoken to a child between ages 0 and 4 is the greatest predictor of success in life. Versame’s device is the first independent, real-time word counting device as well as the world’s first wearable education device for children.

Paired with a smartphone, parents, teachers, and guardians can get feedback and encouragement for greater child engagement.

We have all observed the growing number of wearables coming to market in the past few years. Starting with fitness trackers, the trend to self-quantification now seems unstoppable.

In general, people are happy to attach a device – bracelet or clip – to themselves, and I can see a future not too far away where we simply implant a chip under the skin.

However children, especially babies, are definitely a different case.

There are a handful of wearable companies emerging in this space – such as Owlet, Sproutling, and Mimo Baby – and there has been significant interest in what they are doing, particularly from the tech savvy Millennials who constitute 83% of new parents today.

These companies are focused on child safety; to put it crudely, they are reinventing the well-established baby monitor category. Safety is, of course, of prime concern to a parent. But so is education. 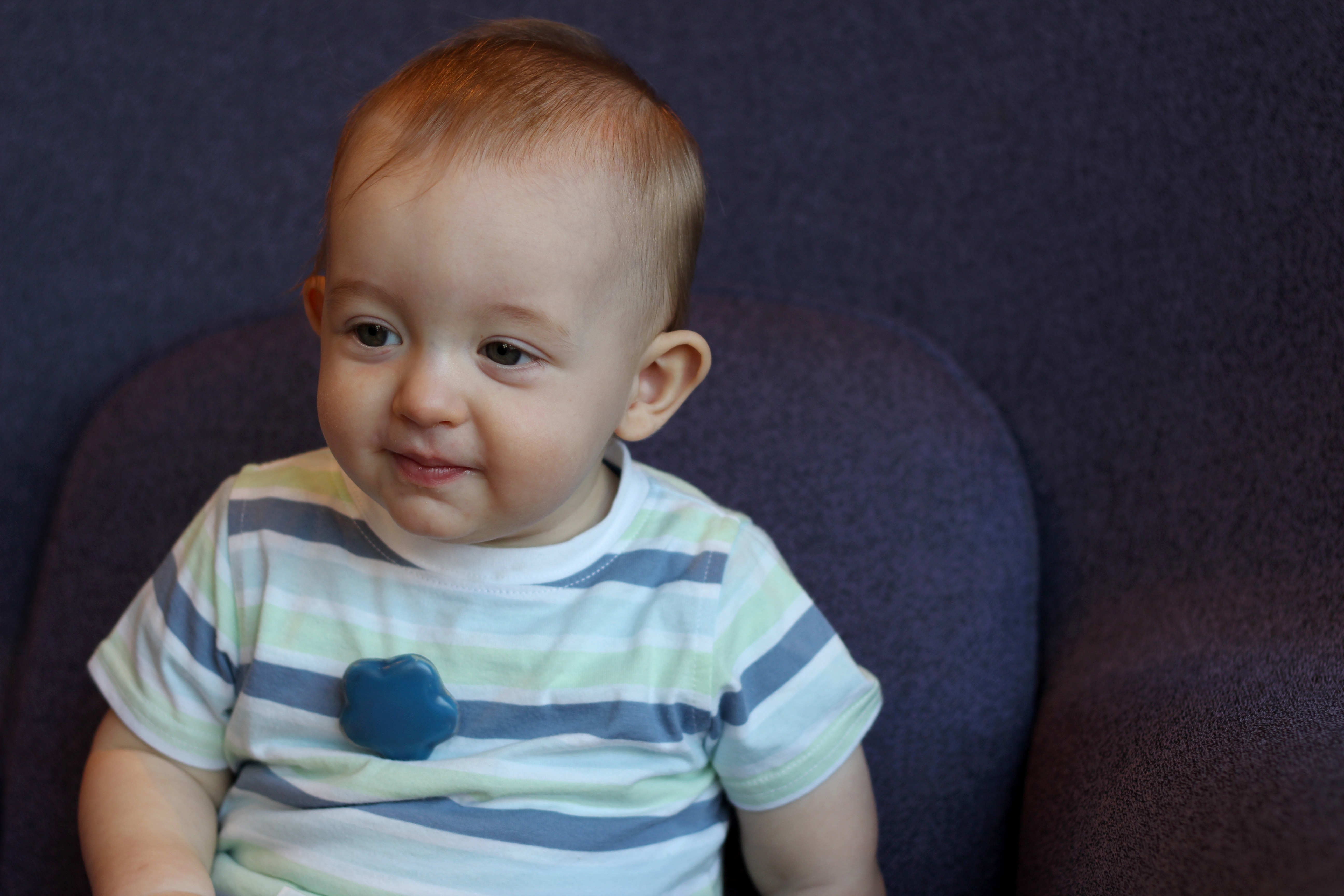 My nephew William models a prototype of our device

What new parent doesn’t have the highest hopes for his or her child? Hopes of Stanford admission in the future? Hopes of emotional stability and happiness?

Historically, healthcare was the main concern for children in the first few years of life, but there is now widespread realization that this is actually the most critical period for brain development. Therefore, education has become a top priority.

Research shows 90 percent of a child’s brain develops in the first five years of life. That is why Versame is creating a new product category with an infant education wearable.

We want to help parents and caregivers be the best first teacher they can be. We want to give them information and inspiration about what they should be doing. We want to give them confidence that they are doing the right things. We want to empower them to help children fulfill their potential and to have fun while doing so! (Our team knows a thing or two about fun, as seen below.) 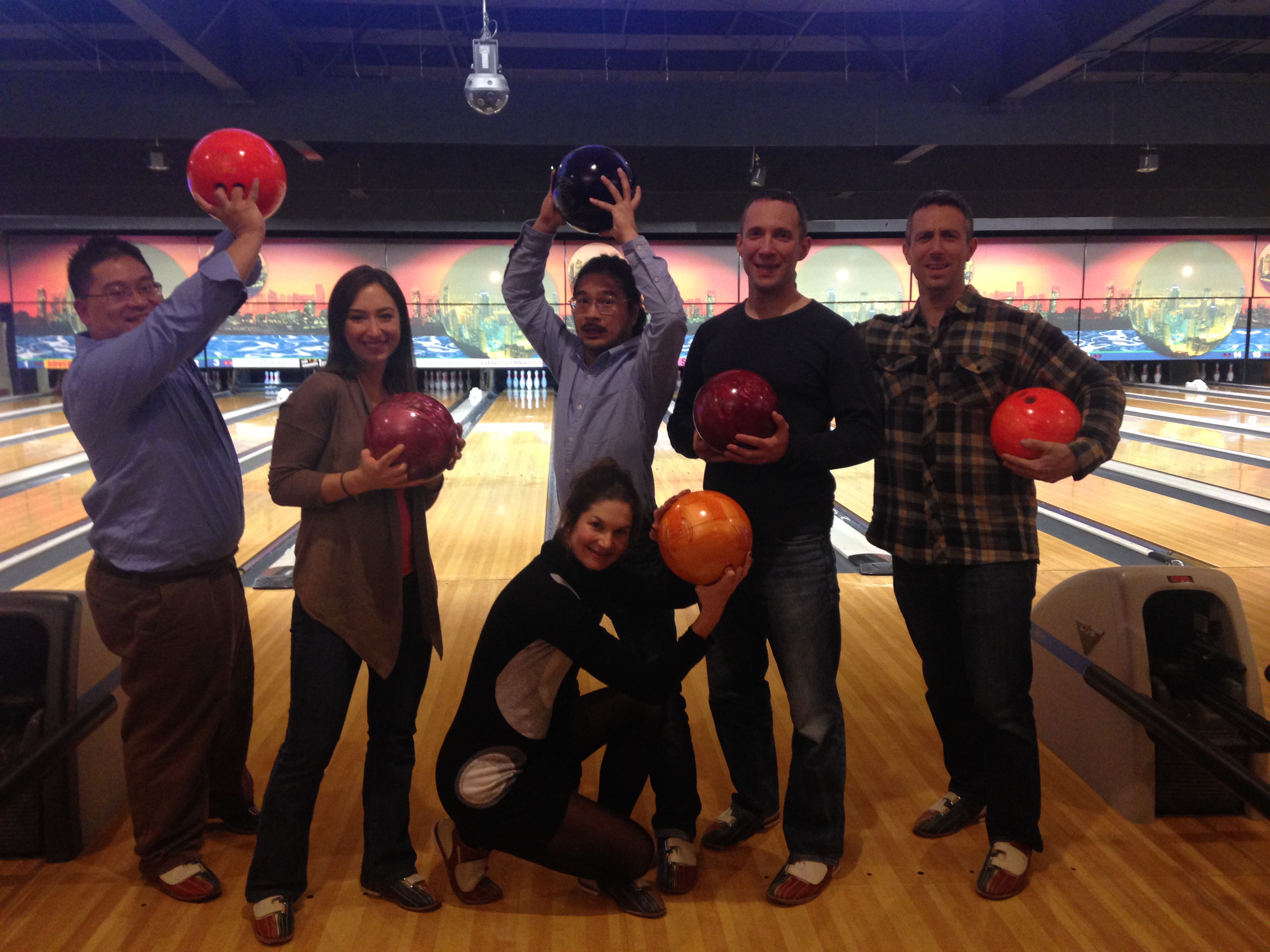 My cofounders have five children between them, but I’m not a parent yet. One of my partners teases my fiancé and me almost daily that we need to hurry up and have a baby as it would be good for the business!

The inspiration for me is education. My parents worked hard and sacrificed a lot to prioritize education, and it undoubtedly transformed my life.

I would love for as many other children as possible to be given the same platform to transform their own lives. My cofounders feel similarly, and this is one of our key driving forces.

For Mission or Profit?

The short answer is both.

We want to have impact at scale and be self-sustaining. It is one of the most exciting things about our device – it has the potential to be ubiquitous. We hope to see every child in the US and ultimately the world wearing one.

For more advantaged families, we will provide reassurance that parents and caregivers are doing enough. We are providing a metric around the pre-school years that has never previously existed. We are promoting engagement, true human-to-human interaction, at a time when the plethora of tech devices in a home are all too distracting.

For less advantaged families, we are discussing partnerships with non-profit organizations (such as the Clinton Foundation) that are already dedicating significant funds to closing the Word Gap.

The Word Gap is the term for the developmental gap that exists as a result of the ~30 million fewer words less advantaged children have heard by the time they are 4 years old. We will work with them to scale the impact of their work and measure the efficacy of their interventions. 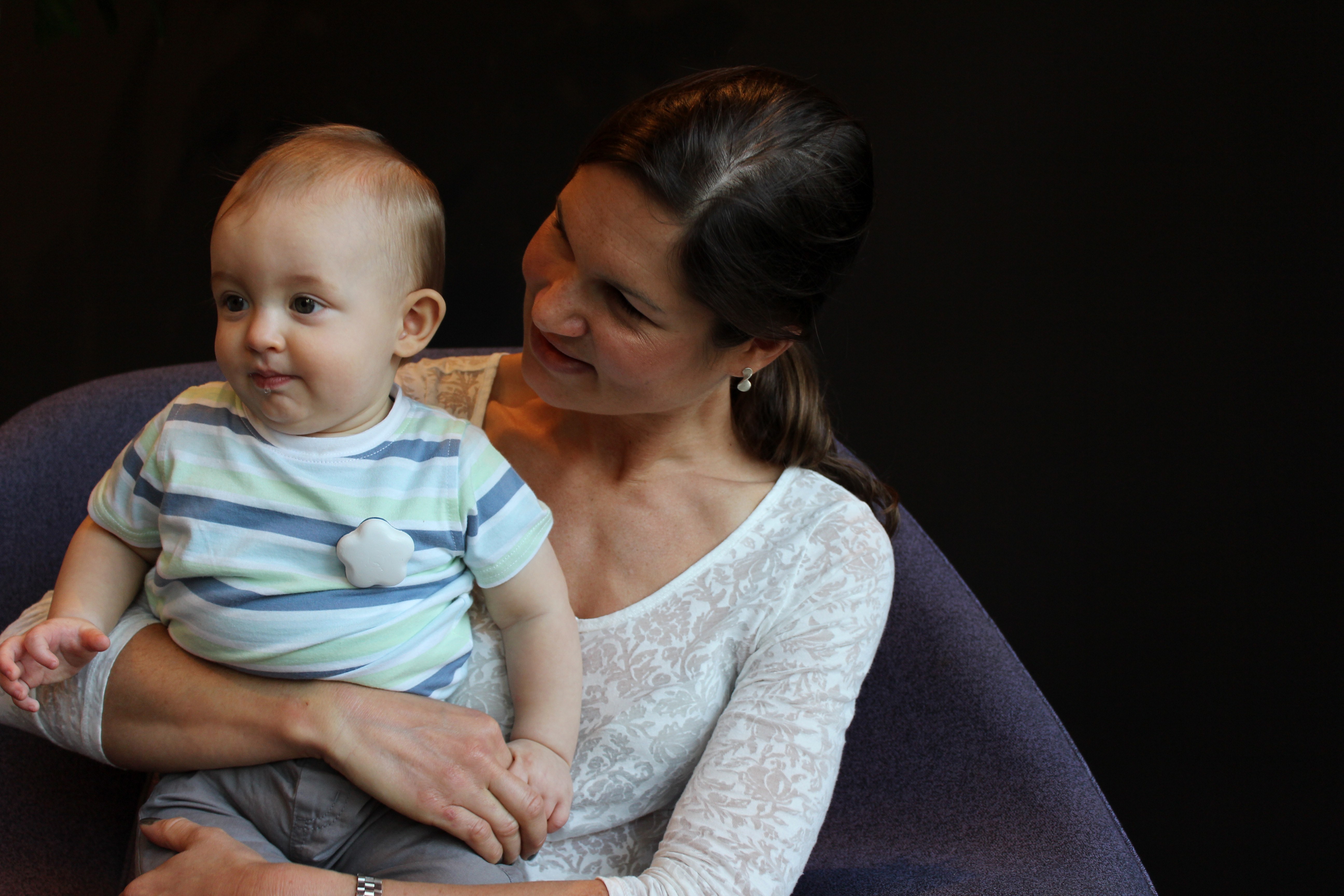 Me and my nephew William

Designing for Both Children and Adults

You might be wondering whether we are designing for children or adults. Both, sadly!

The research that inspired Versame applies to children aged 0 to 4, and originally our plan was to create a device that would serve this entire range. However, we quickly realized that we were setting ourselves up for an almost impossible task.

In an adult life, needs may change very little in that time, but in the birth to age 4 period the changes are enormous. From immobile and uncommunicative baby, to crawling and gargling, to walking toddler, to talking school-ready child.

So we have narrowed in and are focusing on ages 0 to 2. The device will be on (or proximal) to the child so it is vital to design for them. We are mindful of choking, the device being in the child’s mouth and being chewed, and of course dribble and food getting into the microphone.

But the advantage of this age is that they are not yet exerting strong self-control or fashion preferences, nor do they have the fine motor control to remove something.

Concurrently we are designing for the parent. Beautiful, functional, baby friendly. We have found the latter an interesting one – even something that meets choke hazard test requirements can be perceived as too small and that is just as bad!

Emotions will be as big a driver of purchase as logic, I am quite sure. 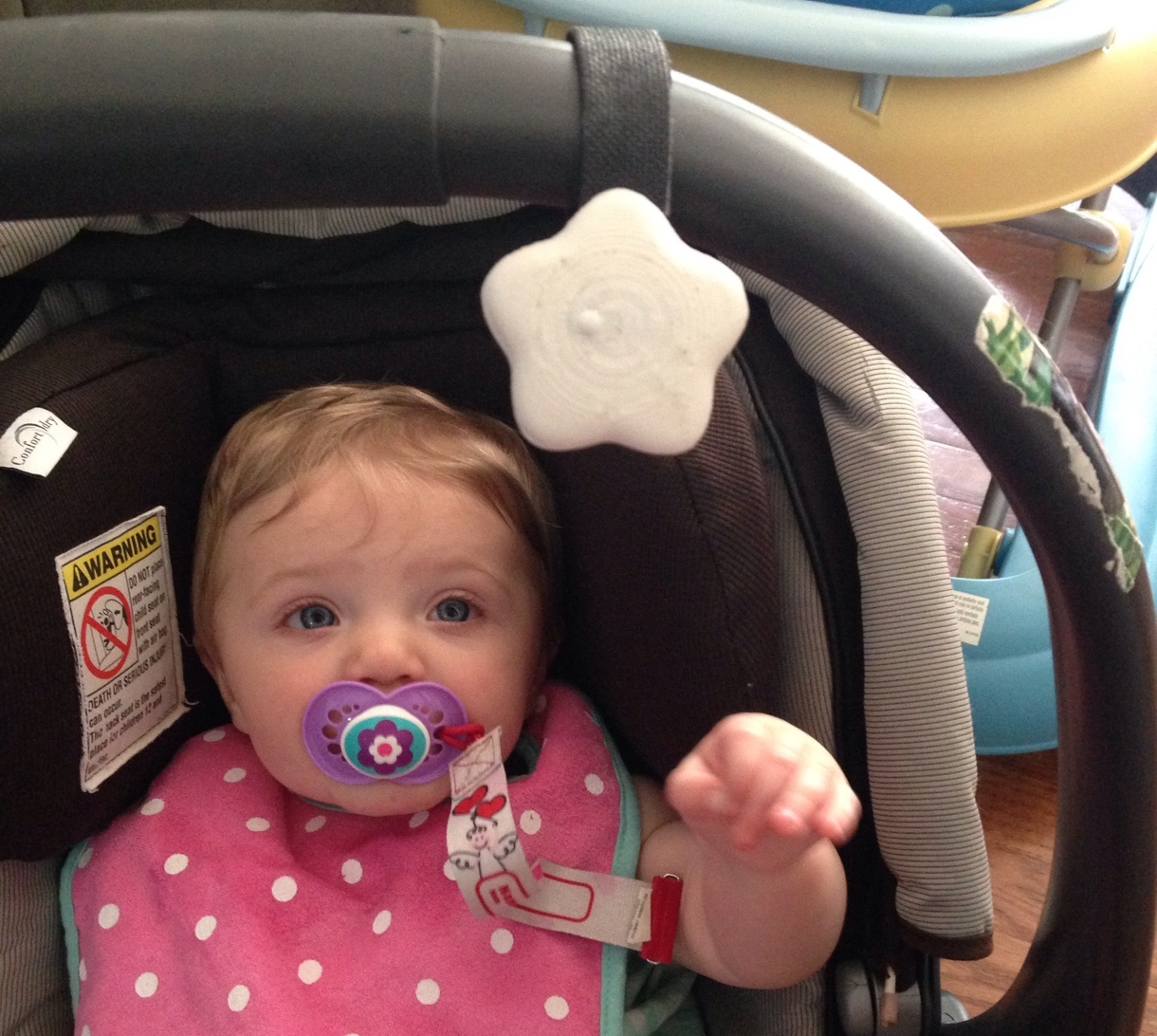 We constantly get asked – and indeed I sometimes ask myself – why we are venturing into the notoriously difficult world of hardware!

In good Silicon Valley fashion, when we came up with the idea, we quickly built an MVP (minimal viable product) to test the concept. We built a bedtime reading app to test with friends and family and quickly learned that an app causes far too much friction for our use case.

When you are with children – of any age from baby up – and have a device close by, they just want to touch it rather than listen to the story being read. And that was just for tracking bedtime reading; the issue becomes amplified when you start to think about keeping the phone proximal to the baby all day!

So, while we are a tech company at heart, we are using tech to encourage human engagement. We want to get tech – phones, computers, etc – out of the picture.

You can learn more by visiting Versame’s website or following the startup on Twitter. All images were provided by the author.

Wheelys Is Harnessing Crowdfunding to Create a Global, Mobile Cafe

Customer Churn: Why It Should Be Your Most Important Metric

Nicki Boyd has 12 years of investment and consulting experience. She left the premier private equity firm in Europe to found VersaMe. She’s worked on multiple IPOs, served on the board of four companies, and helped start Zamboo, a Zambia-based bamboo bicycle-manufacturing venture. Nicki holds degrees from Oxford — where her research centered on both behavioral and developmental psychology — and Stanford.