This Device Will Automate Your Day-to-Day Life

What if we lived in a world where as soon as you made your way downstairs, your coffee maker would start brewing your favorite cup of joe to greet you in the kitchen? Better yet, what if you’re running late, and want to know the moment your child’s home safe without skipping a beat on building your presentation for tomorrow’s board meeting?

The future’s right around the corner with Signul, the product that ‘lets you create micro location zones that can automate and simplify day-to-day life that triggers actions when you enter or exit these zones’.

Co-Founder Trent Shumay and his team are building the world’s first personal beacon system that sends event prompts to your smartphone. While they’re set to publicly launch early 2015, don’t let being a young product fool you. They’ve already begun making a name for themselves with coverage from the likes of Product Hunt, BetaKit, and even had a little camera time on CNBC’s Tech Crowd.

Regardless of how much experience or exposure a team and concept may garner, there are still obstacles Trent and Co. had to overcome and will have to face in the future to position themselves the best way possible. I had a chance to connect with Trent to talk all things Signul, including where they began and the path they’re making the trek on:

So how’d Signul come about and how long have you been working on this?

TS: We’ve been building core IoT technologies for about a year. Bluetooth Low Energy is one of our favourite technologies for a number of reasons, but the biggest one being it’s intrinsic connectivity with smartphones. We began by building a commercial variant of our beacon technology, but we were having a lot of fun using beacons for our own entertainment and utility as developers. We realized that nobody was really focused on bringing this experience to consumers, and that there were a lot things that consumers might use beacons for, so the idea of Signul was born.

Signul itself, as a product is about 4 months old. We were able to leverage a lot of our technology and know-how on the app and cloud side to bring something new to life quite quickly.

What were some of the challenges in building the hardware?

TS: Initial design and layout of our board went very smooth, but there were two key areas we spent a great deal of time on with the hardware to make the best beacon that we could. First, was power and management of the radio. Even though we use Bluetooth ‘Low Energy’, there is a fair amount of power consumed if you want to run a beacon at a high ping rate. There are a lot of different approaches to this on the market which slow down the transmission rate, or transmit in bursts to conserve power. These approaches all have an impact on how accurately you can range a beacon and how fast you can detect it. We optimized power, but then decided to supply the beacon with larger batteries so that we can run full transmission rate for a longer period of time than most of our competitors. All of our tests indicated this was the best, most consistent user experience.

The second issue is radio propagation and basically how consistent we can make the zone around the beacon. We spent a ton of time testing a variety of antennas in various orientations and settled on the best compromise of size and power that would work in the various orientations a consumer might place our beacons in.

In a recent interview with CNBC’s Tech Crowd, you mentioned you’re prototyping with wearables; can you give an example of how that’d be use?

TS: We’ve been prototyping with Android Wear, and the ability to display and confirm beacon reactions on the wrist is definitely a value add to the system. Having your smart watch know whether you’re sitting in the living room, or at work is just as valuable as the phone knowing these things. We could filter notification types, or provide unique controls depending on the context.

Looking to the future, we also see the beacons themselves becoming a wearable. Essentially flipping the tables around – instead of a fixed beacon and moving phone, we could have a moving beacon and fixed receiver, or a hybrid of all the approaches. In addition to doing “lost item” functionality better, this opens the doors to things like “lost person” where maybe a patient with dementia is wandering away from a care facility. This type of wearable beacon has a lot of different applications for safety and convenience. 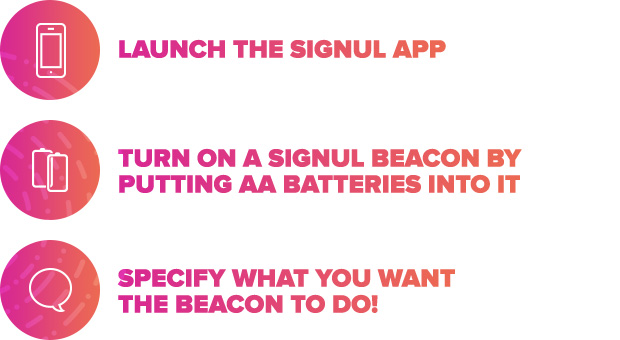 Any foreseeable challenges you’ll have to fine tune?

TS: We’re crowd funding right now on Indiegogo at $50 for a single unit. We think this is a discount over the eventual retail price of beacons, but it’s hard to say what that price point will be right now as volume pricing and distribution will be a different mechanism altogether.

All Publicity Is Good Publicity … After Product-Market Fit

How Getaround Grew the ‘Impossible Idea’ to over 200,000 members.

Raised on family-owned small businesses, Kris enjoys being actively involved within the startup space and has never met a dessert he hasn't liked.