For the Love of Marketing: Making the Most of Valentine’s Day

Most everything about Valentine’s Day has cheesy written all over it — from the graphic representation of a vital organ being a mold for candy to the winged-baby shooting arrows.

So in the world of marketing, where it’s best to be as authentic and native as possible, how do you advertise for one of the kitschiest holidays of the year in a way that feels genuine?

Coming right on the heels of one of the most popular ad days of the year — the Super Bowl — the most interesting campaigns are not only making Valentine’s Day less cheesy, they’re even making the cynics want to join in. We’re going to take a look at how they do it … and we’re guessing it has nothing to do with Cupid’s arrow.

No, these aren’t just commercials; some brands are going for a more cinematic approach when it comes to video. From the camera movement to the plot lines, they’re toying with the idea of making ads that are longer, more expansive pieces, rather than stuffing an entire storyline into a 30-second spot.

Think less like the 2010 Super Bowl Old Spice ad and more like this video from Cartier in which you see three proposals unfold over the course of several minutes. 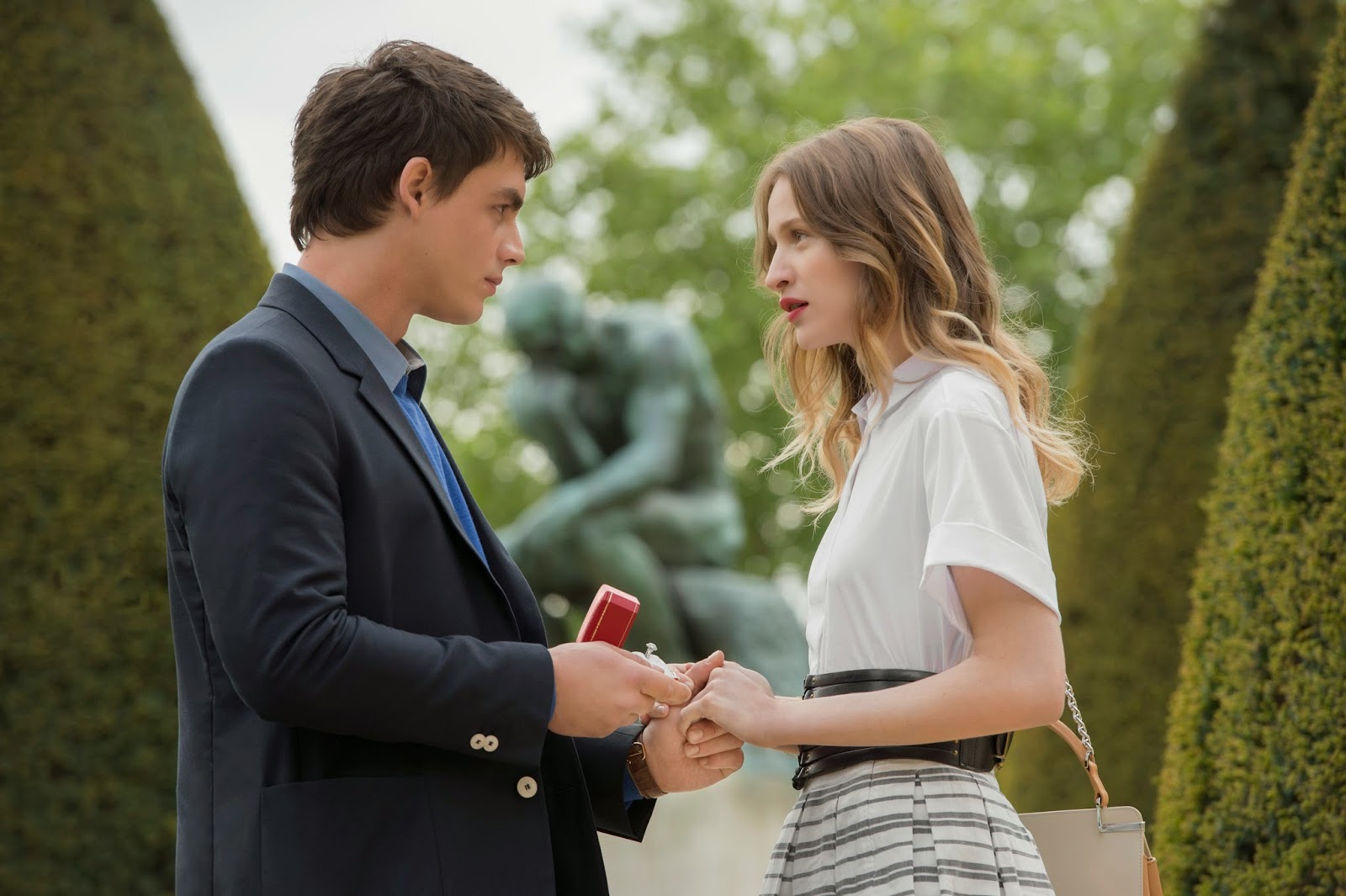 With the recent success of engaging, viral content from the likes of John Oliver, we as viewers and consumers have proven that we’re willing to dish out more than 10 seconds to watch a video if it’s beautiful and/or has an interesting story, and it seems brands are beginning to try their hand at that approach.

Another ad that’s gaining traction this year is from flower company Interflora about a goth guy who falls in love with the preppy girl and so (spoiler alert) he comes to school one day dressed like a prep only to find that she’s come dressed in goth attire.

The Cartier and Interflora ads aren’t telling new tales. But it seems that, when it comes to love stories, it’s best to either go with something extremely fresh and original or to just stick with what’s familiar. After all, love is one of the oldest stories in the book.

But it seems there may also be a third option: tell a familiar story in a whole new way.

While some companies have toyed with the medium of Instagram video, Gap is taking full advantage of its 15-second constraints and offering a 12-part micro-series called “Spring is Weird.” It’s a product-infused love story inspired by their spring line just in time for Valentine’s Day.

What’s more is the story will be following two well-known actors: Paul Dano and Jenny Slate, who actually look like real people rather than models who can read lines. Even though they are more well-known faces than the ones in the Cartier ad, being more off-beat actors makes the series even more intriguing and more real than the video from Cartier. (Albeit, Gap is a much more everyday brand than Cartier.)

The series won’t just live on Gap’s Instagram page but will also appear on dating apps and their Spring is Weird campaign page where you can click through outfits and episodes week by week. The first one “aired” today.

Putting a Real Face on Love

We’re seeing more and more bloggers and Insta-famous folks being tapped by companies to star in advertisements. For example, Kordale and Kaleb Lewis, famous for their Instagram feed, are starring in a Nikon ad with their three adorable children. If there’s one time it’s best to stay genuine and real, it’s when you’re talking about love.

Clothing brand Everlane is a relatively new name in the fashion world and they’re already known for their business model of keeping it real. The business is founded on the idea of creating simple, timeless, high-quality fashion built on a foundation of radical transparency.

For their Valentine’s Day campaign, they promoted their Breton Stripe shirt with this copy: “Started with the boys. Stolen by the girls. Just in time for Valentine’s: Breton Stripes for all.”

On the shirt’s page, you can click through the stories of all of the couples in the ads complete with photos, videos and quotes about their style and quirks with the hashtag #Sharestripes. This is an easy campaign to extend before and after Valentine’s Day without feeling too holiday-specific or over-the-top cheesy. Rather than stand out from their brand, they chose a campaign that blends in seamlessly.

While Everlane’s new model is being accepted with open arms, Hallmark is up against a handful of online letter-writing services and the rise of the e-card, struggling to stay relevant. Still they didn’t get too over-the-top and gimmicky with their Valentine’s Day campaign. Instead, they definitely kept things real without a card in sight to mark a holiday invented for their industry.

They simply interviewed real couples, one person at a time about how they met and what they like about each other. The kicker is when they ask each person to describe their feelings for their significant other without using the word “love.” The couple is then brought together to watch each of the testimonials side-by-side and tears ensue for them and the viewer. They’re calling it the #PutYourHeartToPaper campaign. 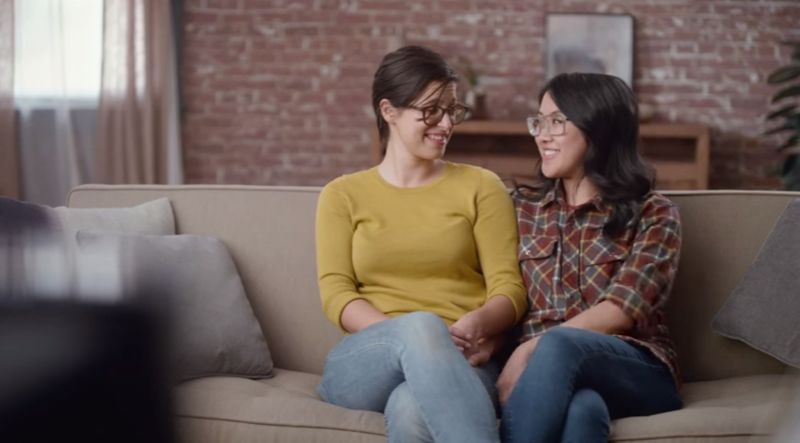 Is the hashtag a bit too long? Yes. But with a couple million views across this series of seven videos so far, it’s proving that people still love a real, honest love story.

The campaign got a lot of attention recently because one of the videos features a same-sex couple, but those headlines definitely don’t give you the full scope of all of the interviews. To carry over the campaign from YouTube, on their campaign page below one of their featured videos, there are cards and advice articles like “What to write in a Valentine’s Day card.”

Whether you’re a startup or a big brand, everyone loves a fun business partnership. When an iconic brand and a startup get together it looks good on both of them, making the more established brand look timely and youthful and making the startup look like it’s right up there with the big dogs. So far, Valentine’s Day has already prompted some innovative branding teams that together are able to offer deals and services that they can’t fulfill on their own, especially not with the dual brand following. 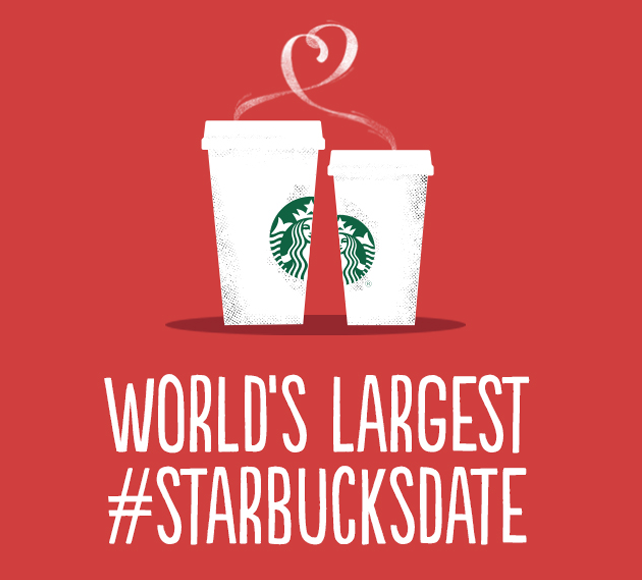 Any casual social dater of 2015 knows that day dates are a great way to meet someone under less pressure. Even more casual and appropriately non-committal is the coffee date. On Valentine’s Day when you open the Match.com app, you will have the option to “Meet at Starbucks.” According to Ad Week, when you click that, Match will set up a date for you and someone else at a Starbucks nearby. They’re calling it the World’s Largest #StarbucksDate.

Starbucks’s decision to pair with Match.com rather than the more casual dating apps like Tinder or OKCupid keeps this promotion campaign from looking too gimmicky, and even without a coupon code (which wouldn’t hurt, right?) more people will certainly open their Match.com app if no other reason to test out the Starbucks feature for a day. 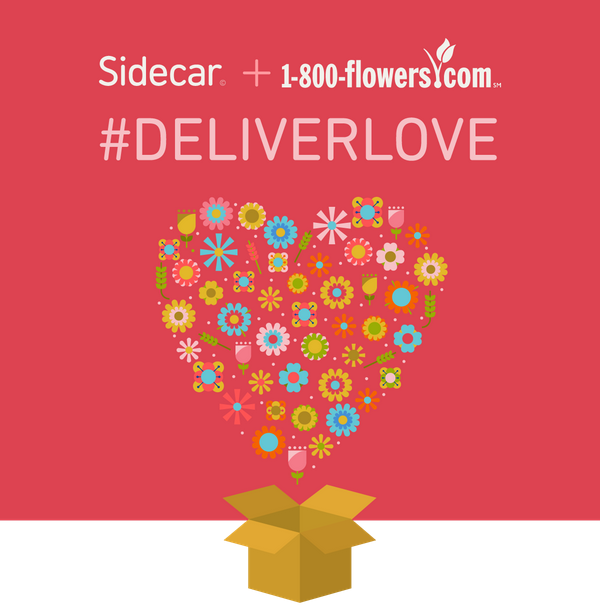 Sidecar has already made a move toward getting more use out of their ridesharing model with the addition of People + Packages.This feature lets them partner up with e-commerce companies to make deliveries faster and at rates up to 80% lower than what you’d usually pay for same-day shipping. Until recently, this feature has only been available in San Francisco, but as of Monday, it’s available nationwide and they’re publicizing it by offering 20% off flowers via 1800Flowers.com which Sidecar drivers will deliver themselves.

In addition to the promotion, you can enter to win a free bouquet for your significant other. Another way they might make a promotion like this more fun would be to hand out impromptu bouquets to riders who could also post pictures to their social networks with the campaign hashtag #DeliverLove. Uber is often doing things like this, their most recent campaign being the Uber Puppy Bowl in which they delivered a puppy playtime to people. 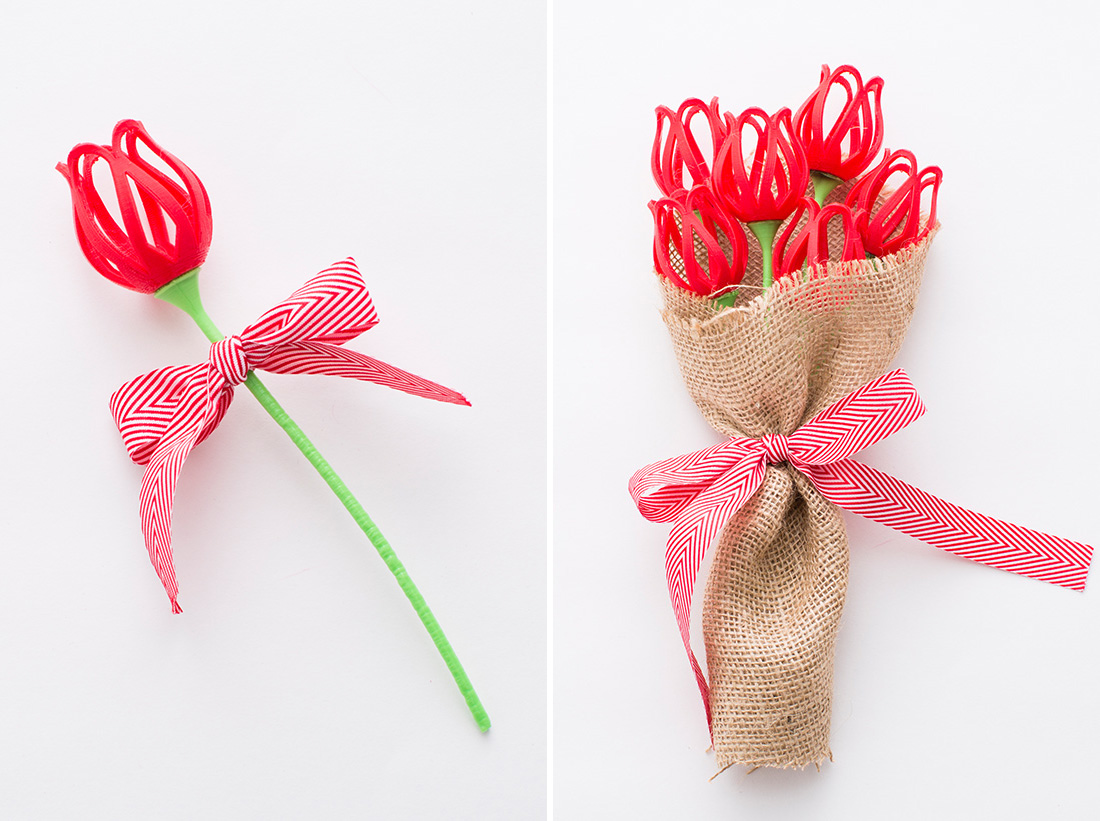 Creative lifestyle site Brit + Co is bringing their passion for all things colorful and 3D-printed to V-Day by sending out 3D-printed roses either by the stem or in a bouquet. It’s a great way to extend their existing Shop feature where they sell the goods of other makers and instead offer a more immediate product right from their own offices. Not to mention, it’s an extension of their DIY flare. For an extra personal touch, they’re working with TaskRabbit to hand deliver the roses during the week of Valentine’s Day throughout San Francisco.

Postmates has been a San Francisco favorite for a while and this year for Valentine’s Day they’re delivering way more than takeout. In partnership with ThirdLove Lingerie, they’re offering lacy underthings delivered on-demand. This idea is perfect for last-minute gifting, but the campaign would have more longevity if like with Sidecar, it was part of a bigger push to expand the scope of their delivery services— in the case of Postmate, beyond food. Still, it’s definitely a more unique delivery.

So it seems that, without a single mention of heart-shaped chocolate or a flying infant archer, that companies are getting right to the heart of things with honest love stories and extended offers on services we already know and trust. Perhaps the days of human-sized teddy bears are over, and our attempts to make a commercial holiday about love a bit more genuine will make all of the red and pink a bit more palatable.

How to Start a Startup: Operational Insight from Keith Rabois