When you think about sharing files, your mind probably scrolls through to a few go-to services: Dropbox, Google Docs and maybe even WeTransfer. Each has their own perks and pitfalls but across the board, none of them are super ideal for cross-team, cross-cloud collaboration.

With Minbox 3, Alexander Mimran and his small team are looking to change that. I talked to him about the evolution of Minbox and how he’s looking to disrupt how we think about file sharing.

(This is the first installation of our new Startup Stories series. Please stay tuned for more interviews with startup founders sharing tough lessons they’ve learned the hard way, so hopefully you won’t have to.)

To start, a little Minbox background. The first iteration of Minbox was a simple Mac application where you could drag and drop files to your menu bar and just enter your recipients’ emails and hit send. Then with Minbox 2 came the addition of the web app. I got a sneak peek at the Minbox 3 beta, and the new features are definitely enhancing and streamlining how teams work on projects.

Mimran told me that with this version, “It will take a lot from the learning that we’ve experienced over the last two versions of seeing how people share files, who they share them with and why they’re sharing them. What we do is we let people collaborate more, rather than just simple link sharing.”

The initial idea for Minbox came from a need to transfer many gigabytes easily. “We thought that there was still a lot of friction associated with sending large files or lots of files.” So, they asked themselves, “How can we make this experience seamless?”

“I think the problem is that there’s data everywhere in all of these different buckets [i.e. Dropbox, Google Docs, WeTransfer] and we’re trying to bring them together.”

The first place they looked to was the photography industry. “Fashion photographers specifically because they take shots in RAW… during a photoshoot..” At the end of every shoot, Mimran said photographers have to import hundreds of the photos to an app, figure out which ones to send, then export those to JPG, zip them and share them (usually in clusters so as to stay within GB caps) with services like Dropbox and WeTransfer. It was a lot of steps to take for an single action — sending photos.

“It was shortening the workflow to be as quick and easy as possible, and [Minbox] handles all of the problems with file sizes and conversions and everything else on the other end.”

The concept, of course, is a great one that people need, so you have to wonder the very thing that probably every founder wonders from time to time, “Why hasn’t anyone done this before?” Turns out, it’s not as simple to transfer files as it seems. This was an initial hurdle the Minbox team had to work through: tackling the back end to make the front end as intuitive and seamless as possible.

To work through those initial startup phases, you have to have a solid team. Mimran said, “Finding good people to work with was a problem. I wouldn’t say that’s unique to us. Everyone needs to find people that fit in their culture. When you’re starting a company and you have a few employees — we only have four — every hire is kind of like really, really, really crucial. So it took us a while to find the right team, but it’s pretty much like we’re a family.”

Working with a small team definitely has its benefits, namely everyone has to know everything about the product. When you live and breathe every aspect of a product, you’re able to develop a style of your own in those early days and let the brand make a space for itself organically. If you watched the teaser trailer for Minbox 3, you’ll see that the company’s style is kind of guerilla. It’s what first interested me in the idea of their disruptive file sharing service.

If you take a quick scroll through Product Hunt, you’ll notice a lot of trends companies use for their startup videos, which isn’t a bad thing, especially if you’re introducing a totally new tech idea to the masses. Releasing a formulaic video isn’t so bad because people are already familiar with the formula, so all you have to explain to them is the product. But Minbox threw all of those formulas to the wind and it really paid off.

Their video made Minbox 3 feel like a top secret Banksy-like trailer for a cutting-edge film rather than a file sharing service. “We posted that video on Product Hunt and we got like 50 thousand views in a day … just the video … People were like, ‘I’ve watched your video seven times today.’ So that was pretty funny. It could have been lots of people watching the movie over and over again.” Regarding the guerrilla feel to the video, Mimran just said, “That’s how we roll.”

“We’re somewhat of a recluse of a team, so that was the inspiration for the beginning [of the video] — us being interviewed about the product with the face blurred out as though we were …. not subversive or anything, just somewhat incognito. The video did maybe four times better than we thought it would, so that was definitely inspiring and a testament to how powerful video can be.”

Playing Well With Others — Especially the User

Regarding the specifics of the video, in its 45 seconds, Mimran wanted to cover two big aspects about the new features to Minbox 3: the user interface and how the service dealt with large files. With the addition of cross-cloud features and more collaboration tools, Mimran said it was all about, “Making it really simple for the people on the other end … Giving the recipient a nice UI — something that’s not clunky, but then works on multiple devices.”

I can tell you that the UI of Minbox 3 is totally gorgeous. There’s enough personalization to make each project feel like a unique experience, but not so much that there’s any sort of learning curve after you make your first project. Rather than competing with or even working in conjunction with other file sharing services, Minbox 3 works above them. It’s putting all of your working files in one place to be shared and discussed in the same language with ease.

“We want to make it more cross-cloud. There will be other clouds involved and I think that’s really important. What we’re going to be doing is kind of playing nice with others and recognizing that files aren’t just stored on your computer.”

In true Minbox fashion, the team is still keeping some collaboration tools top secret until the official launch, but Mimran did mention the addition of features to enhance the real-time nature of collaboration. He said, “All the things that you’re doing in a project should be happening in real time.”

These changes to the file sharing experience came from a lot of research and discussion with current and potential Minbox users. The team asked them simple questions like, “What would you use this for? What are you using it for? Is it breaking? Is it not?”

Mimran said that currently they’re seeing a lot of creative agencies using Minbox because it works well for the bulk of different file types that they’re sending, but it is a great place to share files even on a small scale. I tested the tool myself, sharing various files and assets from previous ThinkApps posts, and it put my mind at ease knowing that all of the moving pieces were in one place for review rather than sending them off at different times and in different formats through email. 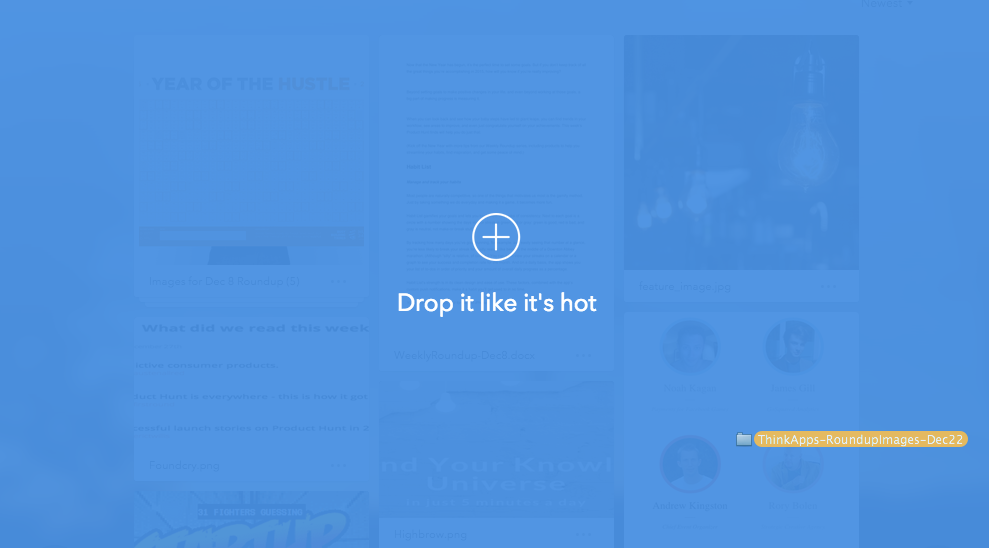 You may have caught our previous coverage of Trevor Owens on Enterprises Innovating Like Startups, and I asked Mimran about this. Would Minbox keep things focused on small teams or make the leap to the enterprise climate? He said, “We’re starting with creatives. I don’t know where we’ll end up. We’re just kind of getting pulled that way by our customers. It’s something we like to do. We’re passionate about it.”

He does know that you have to continually keep a pulse on your users and learn from how they use your product. Mimran said “I’m continually surprised and so grateful for how vocal users are. When you release something, they’ll go use it, give you feedback and test it for you without even asking. Some guy uploaded 1400 images just to test it out … and that’s what’s so great is that we can continue to move along and there are people who will devote time to help us to make the tool better … That’s always just very heartwarming.”

“Even when you’re your own customer, you have to continue to ask your customers [about your product] because they’re the ones that have the final say. I mean the only say, really.”

From the previous versions of Minbox to their teaser video for the upcoming version, it seems that their customers are continually excited and impressed by a new way to share files and collaborate.

So when can you expect to get your hands on Minbox 3 for yourself? There’s no official release date, but Mimran said it’ll most likely be released in the spring of this year. They’re still researching what pricing model will best suit the new version. In the meantime, you can test out Minbox 2.

How do you share files? We’d love to know about what you look for in a file sharing service in the comments.

Looking to grow? Learn how other successful founders grew their business.

Featured image was taken from this video by Minbox.

Lean Enterprise: How Big Companies Can Innovate Like Startups