Whether or not you agree with his politics, Francis Underwood has uttered some poignant one-liners that can serve as inspiration for entrepreneurship. Just be sure to do as he says, not as he does.

All infidelity, treason and killing aside, ever since Underwood broke the fourth wall in the first episode of House of Cards, he’s been spouting profound quotes straight to the audience with the fervor of a Southern preacher, the ambition of a Silicon Valley CEO and the deep-down darkness of any character who cheats his way to the White House.

But when you remove those powerful lines from the context of a political drama, you start to realize that Frank may just be on to something … maybe a career in startups?

Here are seven of Underwood’s best startup quotes from Season 3. (Don’t worry. No spoilers ahead.) 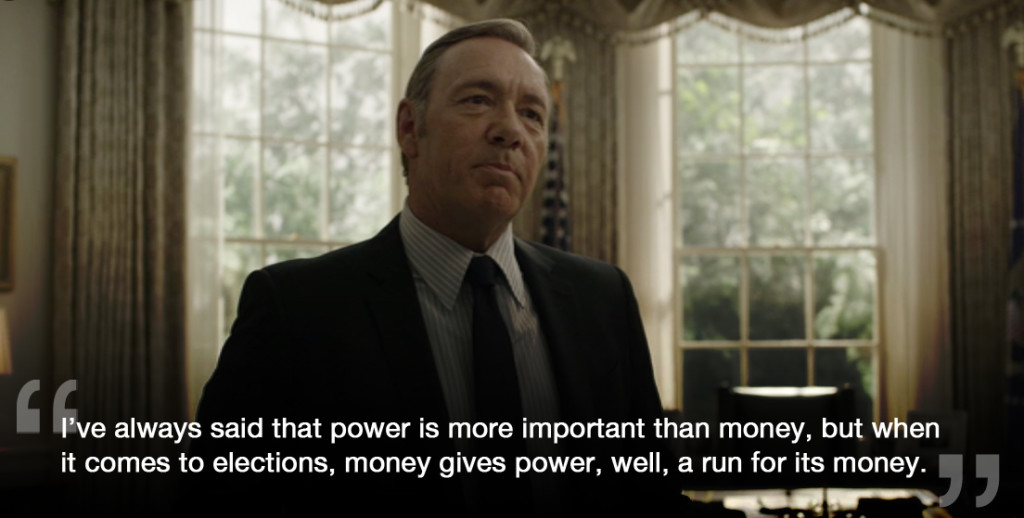 Don’t let Underwood deter you. In the business of startups, power comes from your users.

Even with a ton of money from investors, if people aren’t using your product and loving it, you need to re-prioritize your efforts. You need to focus on your customer.

Kevin Hale, founder of Wufoo, treats his customer interactions like a marriage, literally. He channels lessons from marriage psychologist (which Season 3 Underwood should do too, #amIright?) John Gottman for some of his staples of customer service: Always respond to your customers and anticipate their needs.

Without stellar customer service, you don’t get conversions and without conversions, the strength of your audience and the influence of your company weakens. If it means pinching pennies through bootstrapping or going the accelerator route, entrepreneur Kris Eul advises to do what’s best for your user first, and the money will follow. 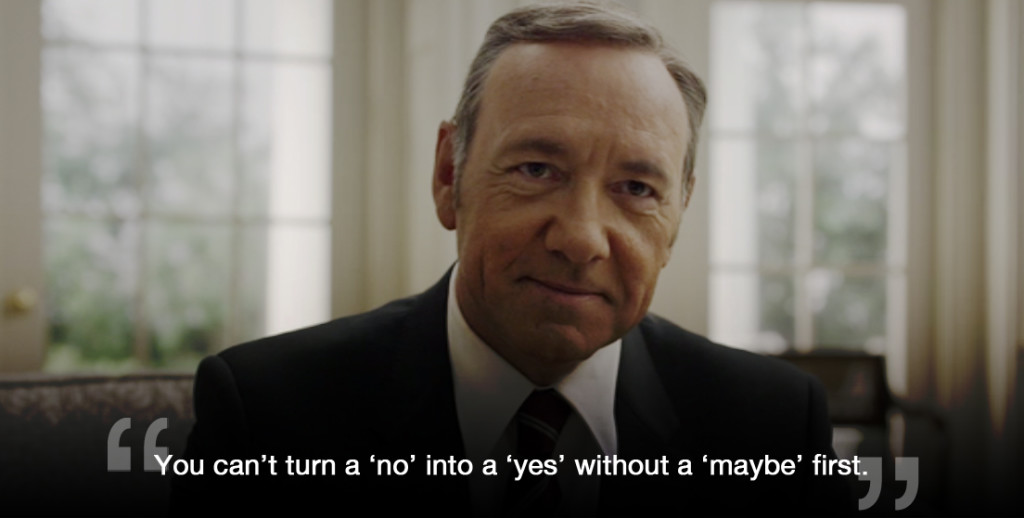 When you’re Frank Underwood and you’re having to convince the country and Congress of your allegiance, it may be hard to look past your own ego long enough to realize that you’re a liability.

But when you’re pitching your startup to VCs and investors, you have to understand that it’s always going to be a risk for them. Even after they’ve given you money, you have to continue to prove yourself and use it wisely in order to mitigate the “maybes” and turn them into “yeses.”

In talking about this idea, Marc Andreessen explained the onion theory risk. The concept is that, as a startup, you are basically layers and layers of risk. As you raise money and spend it wisely while achieving milestones, that risk begins to shed away and you can hold onto more stake in later-round funding after you’ve proven your value. 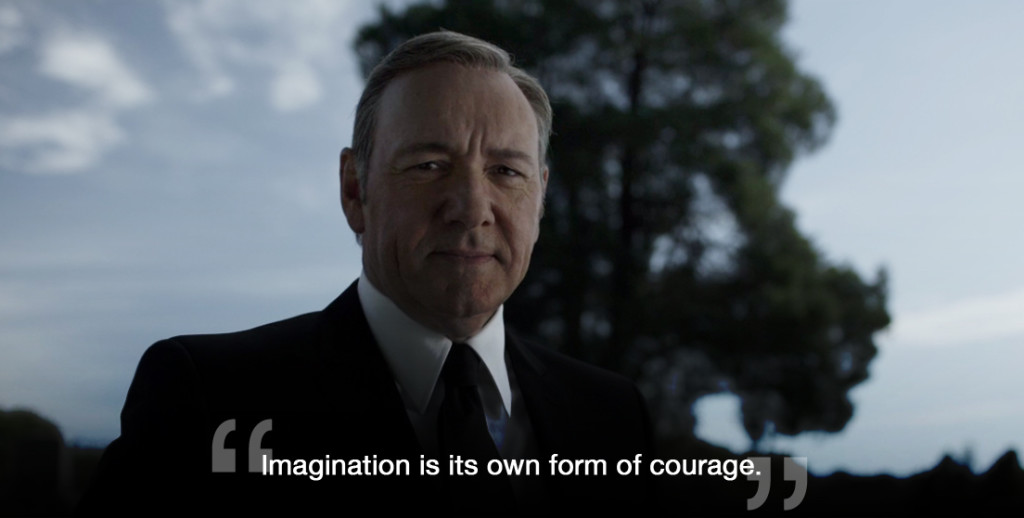 Part of that “entrepreneurial spirit” people are always talking about is just the confidence to turn an idea into a product and then into a business. It’s having the gumption to believe in those late night scribbles, which as Underwood says can sometimes be all the courage you need.

QCut founder Crystal Beasley saw the poor working conditions of garment workers in Cambodia, and rather than just changing the way clothes are produced or how we wear them, she’s changing it all. She’s pursuing her vision of majorly disrupting fashion with made-to-order jeans that come in 400 sizes. This took imagination, but it also took perseverance and the prowess to step into a century-old industry and change it from the inside out. 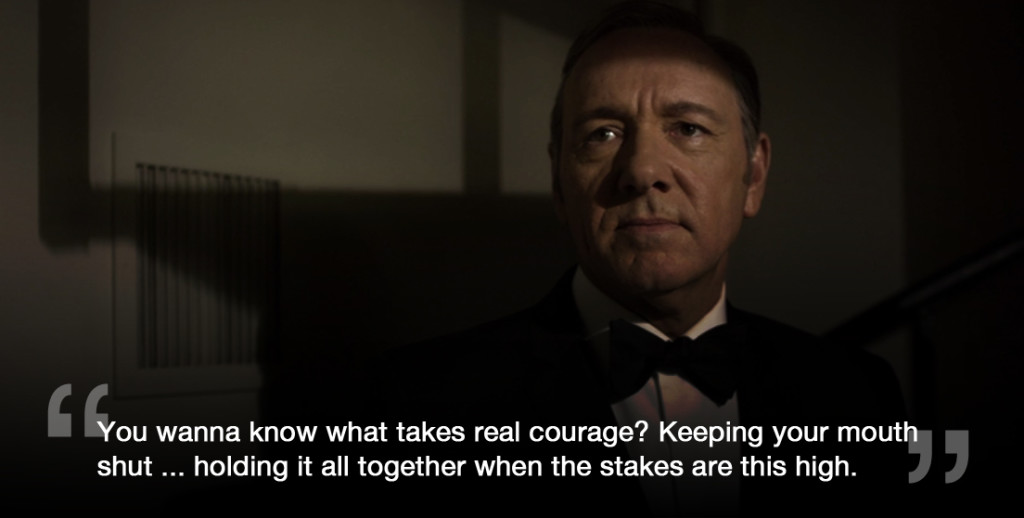 For all his extremes, Underwood can at times be a lesson in control. The exercise of this control is often how he’s able to get what he wants — if that doesn’t work, he resorts to very loud shouting or bloodshed, but let’s just stick to the controlled approach for now.

When you’re entering a big ring with fierce competitors, it’s easy to go on the defensive. For example, when a little artsy project like Ello tries to run up alongside Facebook, Chris Messina (inventor of the hashtag) says they’re just not solving a problem people really care about.

When you’re going into battle against Internet giants, the stakes are high, and you’ll want to shout and wave your arms for attention. But you need to operate from a position of confidence in your product and have your own, unique definition of success that’s not in direct competition with the big guy. Instead of trying to beat them where they’re winning, you’ve got to first beat them where they’re losing.

Peter Thiel, cofounder of Paypal and early investor in Facebook, says that, as a startup, you should aim for a monopoly approach. Start with a small market, take it over, and then expand to others in concentric circles. He said, 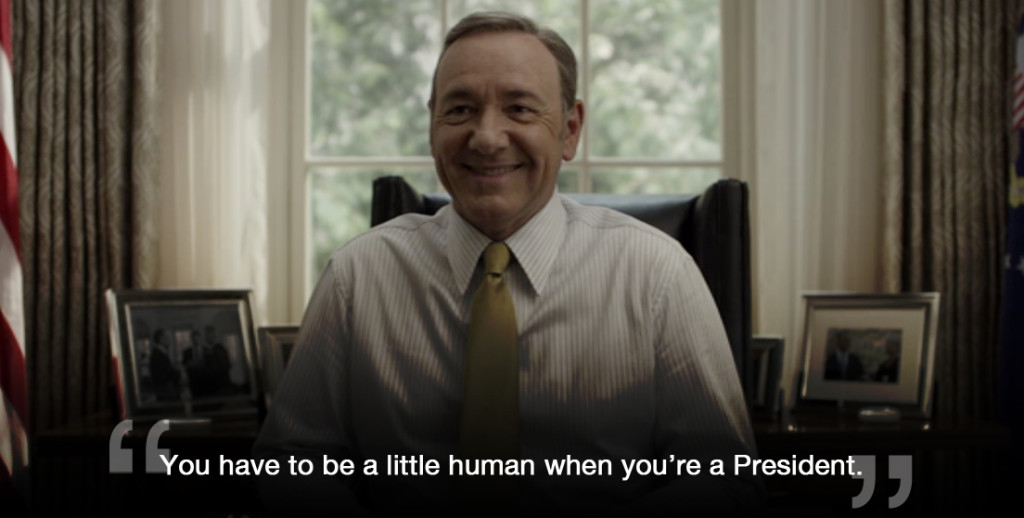 In the 24/7 workdays of your startup, it’s easy to begin feeling like you have to be a machine, but that pace isn’t feasible for anyone to maintain for long.

As you start to hire a team beyond your cofounders, it’s time to really take a look at your managerial skills to ensure that you’re building a company culture that’s friendly, productive and, well … human.

Reid Hoffman, cofounder of LinkedIn, says that even with product-market fit and a stellar product, you have to build a company that your employees want to work for and your audience wants to buy from. This all starts with good management.

All of these things come with practice. But as Keith Rabois of LinkedIn and Square said, at the heart of it, your goal is to build a company that can run on its own. Measure your progress and be ready to strategize changes when you aren’t improving. Don’t ride on your pride like Underwood does, often until it’s too late. 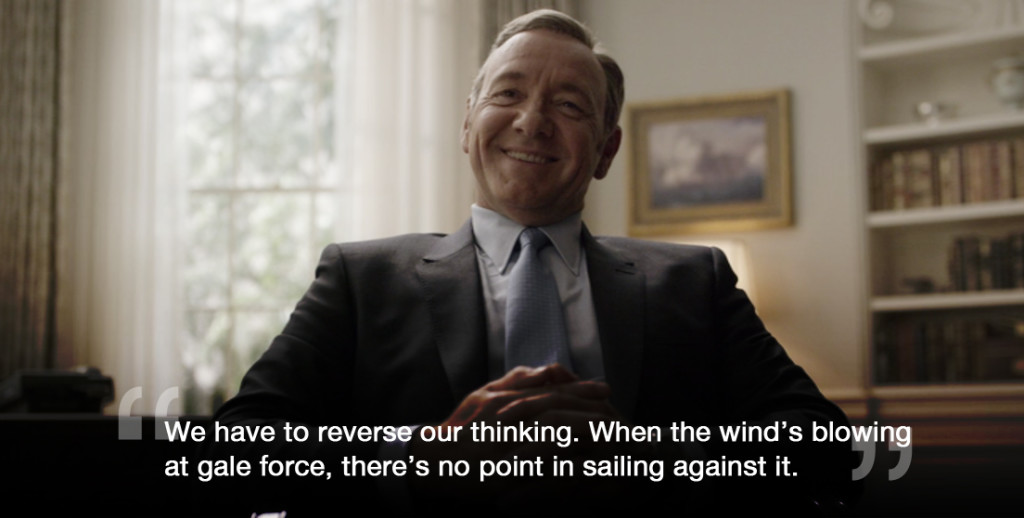 Some of the best startups are heavily guided by users. While a founder can conceive an idea and release it to the masses, many of the more successful companies (especially in the social realm, such as Twitter) really listen to their users to anticipate their needs, rather than trying to make a case for needs that don’t exist.

Following the lead of users instead of trying to convince them to change directions is exactly what led to the success of Thalamus. Founder Garrett Gan looked at all the ways the ad vendor space was failing and stayed flexible in his solutions.

Unlike Underwood’s compliance, which is usually a farce, Gan’s flexibility led him to real innovation. He had to learn a lot more about his industry and really dive deep to anticipate the needs of his users. He eventually ditched his original concept for a workflow automation tool and instead created a database of vendor contacts, which led to a major payoff.

Bonus points if you start interviewing the non-users. Emmett Shear of Twitch said that if you can tap into that space and conquer it, you’re truly a step ahead. 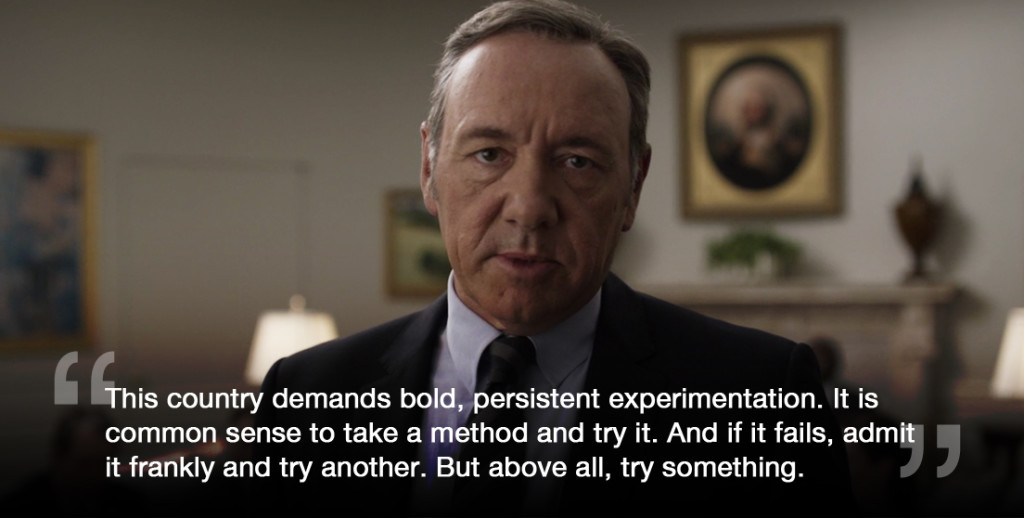 If you want to talk about an industry that demands experimentation, it’s definitely startups. But even Silicon Valley can become a little too insular and calculated.

Pieter Levels is a founder who decided to tackle a new startup every month for a year, which sounds exhausting if not Underwood-level crazy. But he was onto something. With a tight time constraint, he had to focus much more on the actual doing — not just the planning, researching and writing about doing. He said,

“You can do a lot more on your own than you think. A majority of the startup world is distraction.”

When you cut out the distractions and start finishing things, he said you’re going to be “ahead of 99% of the people out there.” Keep launching and keep trying, even if your model doesn’t scale.

In fact, founder Stanley Tang might encourage you to start with a model that doesn’t scale. When he started DoorDash, Tang and his team began by launching a really small site to house the basic info of their delivery service — only the bare minimum that their small team could handle.

They launched the site in a matter of hours to see if it would resonate with users and from there, they were able to see the need in real time rather than spending months trying to predict it with statistics.

The next time you’re watching House of Cards, try listening to Frank Underwood’s advice not as that of a tyrannical politician, but instead as a startup guru who just doesn’t know it yet.

Images via Netflix and Tumblr.