This is the second installment of our two-part interview with Chris Messina, best-known as the man who invented the hashtag.

Last week we brought you Part One of our conversation with Chris Messina where we covered life after Google, behavioral economics, predicting the future, and creating communities.

If you haven’t yet had time to read Part One and its full introduction to Messina, here’s the gist: he worked in development and user experience, as both a consultant and founder, until 2010 when he joined Google and worked on their (then) brand-new social network. Since leaving the company in 2013, Messina has continued to be a thought leader in the tech community with a strong presence on Medium.

In Part Two, we discuss defining success in software, the hashtag, innovating across cultural and privilege divides, and what privacy means in a time when we give away our precious digital reflections to social networks for free.

What do you see when you imagine the next social network?

Essentially what I see happening are young people picking up mobile devices and creating an entire computing context and frame of reference on these devices.

This inversion will have huge and lasting consequences, and it will largely be felt in the simplification and directness of the experiences that become the norm in subsequent years. To be more concrete: now that everyone is a publisher, we need publishers to be more concise.

This explains the core attractiveness of Twitter, Instagram, Vine, and Snapchat. When you limit how much people can publish, you make the consumption of that content more efficient. People want to be entertained, but they also want to get in and get out.

Nailing the right set of activities, media objects, and reactions is the way to think about creating social applications. So users don’t necessarily want features — what they want are tools that help them to express themselves and communicate, in bite-sized moments that fit into their hectic lives.

Why do new social networks fail so often when they have a lot of initial interest?

(I’m thinking specifically of Ello and other recent, smaller ventures.)

Failure depends on your definition of success.

If Ello is an art project, then I’d argue that it’s largely successful. If it aspires to offer freedom and ad-free living for everyone on the internet, I’m not sure it’s going to pull that off.

They certainly got people talking, and they do have a concentrated, active user base, but will they find conventional success where App.net or Diaspora didn’t? No, I don’t think so. And the problem is that the pain they’re trying to address — or the economic imbalance they’re trying to correct — simply isn’t salient for most internet users.

If Facebook can help you get in touch with your friends faster and more reliably than Ello can, then using Facebook means that you spend less time futzing with technology. That’s a killer feature.

If you want an independent social network to succeed, you need to adjust what success means. Network effects are extremely difficult to overcome. Heck, even Google couldn’t do it.

Do you have any advice for someone building a social network?

I’ve started saying that “social software” is redundant because almost all software — especially mobile apps — ought to be inherently social somehow.

The problem with building a new social network is that the address book and Facebook already exist, so it’s hard to motivate the reconstitution of the social graph unless you’ve identified a narrow segment of people that are otherwise not efficiently connected.

If you can identify a niche, create software that connects its members together in real and valuable ways. If it makes sense to persist those connections through a social graph, you can add “follow” or “add to friends” buttons.

But don’t start by trying to build a social network; start by creating a context where people can work or share together to create value that wasn’t being produced before.

For example, the Known project is cleverly focused on students and teachers. They espouse similar values to Ello, but are attempting to serve a specific group of people that desperately need to be better connected.

Many entrepreneurs solve their own problems through innovation. Do you use that method?

For the past 20 years, it’s proven prudent to focus on problems apparently relevant to young, white men. The context and pain points are familiar to us, and we can create solutions that we can convince our friends to use.

But increasingly this approach is limiting, short-sighted, and insulating. There are now more internet users unlike this cohort, and as the internet spreads around the world, the trend will only broaden.

This is a good thing! But it means that entrepreneurs need to adopt a more humble and curious attitude towards the world, its people, and their unique and interesting challenges. This is where design and ethnography come in — enabling creators to better understand communities of people unlike themselves.

After all, it’s these people — the ones just getting onto Facebook for the first time — who represent the era of growth for technology products. Doing this effectively means getting outside our comfort zone and meeting them where they are.

I have to mention the hashtag. I think it’s fascinating that Twitter outright said it would never catch on.

I love Twitter, largely for its quirkiness. It’s kind of like the Napoleon Dynamite of social networks. It’s so odd, but it doesn’t really realize how odd it is, and also thinks it’s pretty fucking hot shit. Somehow, it seems to be both.

So it was with the hashtag, this super nerdy idea that I borrowed from IRC, and presented to Twitter leadership in 2007 because I thought it would make Twitter more useful without much engineering effort.

But their vision was informed by their time at Google, and since Google is all about big data and complexity and algorithms and not asking their users to think much, I think Biz was like, “No, Twitter needs to be simple and hashtags make it more complex. People don’t even understand what a tweet is — how are we going to teach them about hashtags?!”

And so, it wasn’t like they rejected the hashtag specifically, they just had faith that technology would solve what turned out to be a pretty human problem: getting people to tell you what the heck they were talking about in 140 characters or less.

You’ve written a fair bit about privacy. Can you elaborate for our readers?

The competition between Google, Facebook, Apple, and Twitter to own us, the users, is fierce. And as is typical with new industrial cycles, the individual has never had less economic clout to compel these companies to reward us for the value that we create on their platforms. 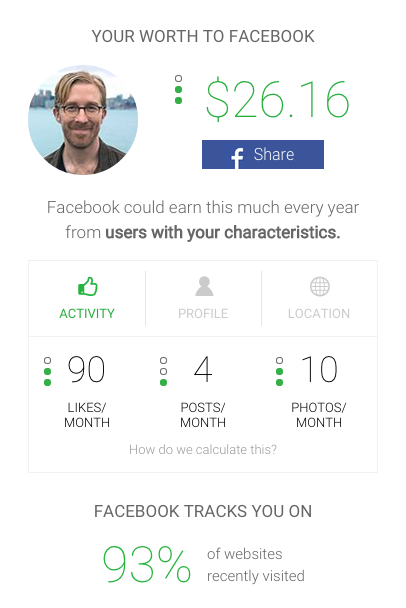 Yet the data I store with Facebook is way more valuable to me. They’ve got my friends, my photos, my timeline, data from the Facebook Connected apps.

So what if I threaten to quit? They’d lose — what? — $26 in value on revenue of $12.47B. There’s a complete imbalance in our individual sovereignty over these service providers.

These companies know much more about me and my preferences than I probably do, and are constantly learning more. The platforms used most consistently and that harvest data about users should provide significant user benefits — from better customer service to personalized experiences to economic benefits.

But how will we ever be able to negotiate a better deal when we’ve already bargained away our data for next to nothing? Sure, I’ve had a few friends quit Facebook, but invariably they come back. Welcome to the Hotel California of the internet.