The app market is a highly competitive one — as a result, you’ll need to get creative with your marketing strategy in order to stand out from the pack.

Winning at a top app awards show is a great way to get instant press (and credibility). If you’re confident that you’ve got a well-designed, highly functional mobile app, check out these five contests where you can get noticed.

First in our discussion of top app awards is the Webbys. Presented by the International Academy of Digital Arts and Sciences (IADAS), the Webby awards famously recognize “the best” of the Internet.

In fact, the New York Times once called a Webby “the Internet’s highest honor.” So, if you want to battle with the heavyweights, this is the contest for you.

Within the Webby’s “Mobile Sites and Apps” category, which “recognizes mobile websites and apps made for all mobile devices,” there are approximately 40 different awards.

These are divided by “app type” (fitness and recreation, music, social, and so on) and “features” (best streaming audio, best user interface, etc.)

You can enter as many categories as you wish. However, each entry will cost you $150 to $355 depending on the category and submission date. So you may want to limit yourself to those you feel most confident about.

Early and late entries are typically due in late October and mid-December, respectively.

The Webbys are judged by experts from tech, fashion, music, media, and business, meaning your app should appeal to multiple audiences.

In 2015, MailChimp Snap took home the Webby award for “Best Practices” in the Mobile Sites and Apps category.

The app got bonus points for its clean, streamlined UI and how similar it looks and feels to the MailChimp website. 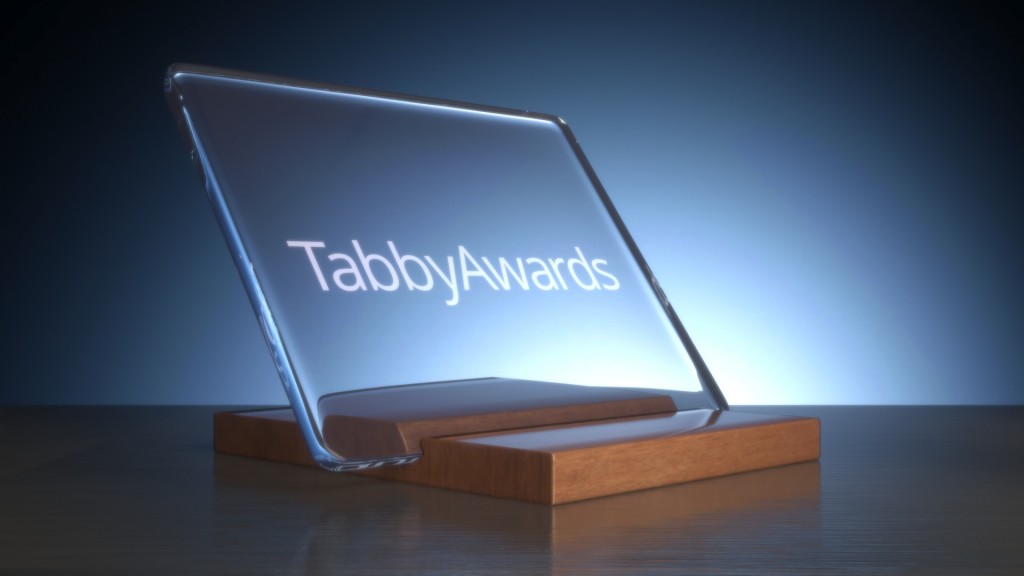 Next up in our examination of top app awards is the Tabbys.

The Tabby awards is the “only global competition for the best tablet-optimized apps,” making it a fantastic one to enter if you want recognition for your iPad or Android tablet app or game.

Once you’ve chosen your high-level vertical, the categories become incredibly specific. Think “iPad, Kids (up to 5)” and “Game: Puzzle, Cards, and Family.”

You can enter the same app in multiple categories, but each counts as a separate entry. The first entry will set you back $165, with each subsequent entry costing $95.

Sign up here to get notifications for the 2016 contest.

Judges evaluate the following aspects of each tablet app:

After the judges review all of the entries and choose the “Nominees,” two parallel judging processes occur. While the expert panel chooses their winners, the public is also invited to vote for the “Users’ Choice” awards.

Most of the judges have backgrounds in app and game development and publishing. There are also some journalists, analysts, and expert gamers and app users.

In 2015, the FitStar Personal Trainer won the Tabby award for the “Food, Health, and Fitness” category.

The FitStar Personal Trainer is a minimalistic, easy-to-use personalized exercise app, which the judges called “beautiful,” “engaging,” and “very handy.”

Since the Tabbys is a tablet competition, the winning apps must in some way be tailored to tablets. “The combination of a larger screen and easy mobility make tablets the ideal medium for this kind of video-based fitness app,” explained one judge.

Unlike the other top app awards on this list, “best app” is only one trophy up for grabs at the Crunchies, rather than the primary focus.

While that means you’ll likely face steeper competition in the app category, the fact that this event is hosted by TechCrunch means the winners are all but guaranteed media coverage.

The Crunchies have a somewhat complex system for choosing winners. Nominations are tabulated daily and are open to everyone, meaning that in theory you could vote for your company once a day in all 20 categories.

After the nomination period closes, the Crunchies Committee chooses the top five entries in each category based on “the quantity, quality, and breadth of submissions received.” This means it’s pretty important to rally your supporters to vote for you.

If you’re really serious about winning, we suggest hosting a campaign around the Crunchies: throw a “nomination party” to publicize your entry, ask your email subscribers to vote for you, post about the contest on social media, etc.

It’s also worth nothing that, since TechCrunch focuses on entrepreneurs and startups, you’ll have a better chance of winning if your app is somehow “disruptive.”

Nominations traditionally open in November and close in December.

The winners are announced in early February at a splashy awards ceremony typically attended by the who’s who of Silicon Valley.

Acorns, which was the “Best Mobile App” runner-up at the 2015 Crunchies, is a highly-innovative financial services app.

Acorns helps users invest their spare change into diversified portfolios of stocks and bonds. For example, if you spend $1.75 on a snack, the app will take the leftover 25 cents and invest it.

By automating the investment process and offering it to users via an easy-to-use app, Acorns is able to tap into the Millennial market.

The organization actually holds several simultaneous “best app” awards. And with choices like “Best Social/Lifestyle App” and “Best Business App,” you’ve got a good chance of finding your niche.

Every BMAA judge has a unique core competency, which means each one will be looking at different aspects of your app.

However, the organization says there’s a general list of criteria, which includes:

Because the Best Mobile App Awards also functions as a marketing platform, there are two submission options: Silver and Platinum.

Silver (with an entry fee of $100) comes with a spotlight in the organization’s newsletter and a lifetime listing as a nominee.

Platinum (with a steeper $150 fee) also includes an interview on the site, a digital display badge, and a spot on the homepage.

Each June during its Worldwide Developers Conference (WWDC), Apple announces its top iPhone and Mac applications as part of the Apple Design Awards.

Become one of these top app awards winners, and you’ll definitely see your download rate soar. (Check out this list to see how past winners have fared one, two, and three years down the line.)

Apple doesn’t accept nominations for its contest, meaning the best way to be honored is to build an amazing app.

First, Apple looks for apps that are “delightful.” Yours needs to have personality, whether that’s in the form of humor, playful design, sound, or captivating animation.

Winning apps are also “intuitive.” It should be almost as easy for a first-time user to navigate through your app as an experienced one.

Apple also searches for apps that are “exciting” and “compelling” — in other words, apps that expand the capabilities of your smartphone.

Finally, the app must be “reliable.” It doesn’t crash, it doesn’t lose user information, and it doesn’t act in ways you don’t expect.

Fantastical 2 was among the winners of Apple’s 2015 Design Awards.

This calendar app created by Flexibits won thanks to its meticulous design, high functionality, speed and responsiveness, localization support, and deep integration with OS X.

With conversational requests, users can quickly create both one-time and complex recurring events. And Handoff support means they can easily move from iPhone to Mac to iPad and back.

In this post, we’ve shared everything startup founders and product managers need to know about five of the top app awards, including the Webbys, Tabbys, Crunchies, Best Mobile App Awards, and Apple Design Awards.

Always make sure, however, that you’re building and iterating upon your app with your user in mind — not these contests.

While winning a top app award can improve your download rate, only useful features and delightful design will improve your user retention, which is much more important in the long run.