This is part of a series on machine intelligence companies. We interviewed Beagle, Mariana, Beyond Verbal, Preteckt, Affectiva, Eigen Innovations, and ClearMetal. Now we’re featuring iSentium.

iSentium, which has offices in the US and Canada, harnesses applied artificial intelligence to extract sentiment from unstructured social media content and transform it into actionable insights in verticals such as finance, politics, and brand management.

Founded in 2008, iSentium’s expert team hails from both industry and academia and has collectively published more than 200 papers and 18 books.

We recently chatted with iSentium’s chief executive officer Gautham Sastri about the inspiration behind the company, its patented NLP technology, the power of social media content, and more.

What’s your role and what does that entail on a daily basis?

I am the CEO of iSentium. Given the small size of our team, I am deeply involved in the day-to-day running of the firm.

I focus heavily on:

A) product development, leveraging my data science skills developed over a 30-year career in signal processing, seismic acoustics, and weather forecasting; and

B) sales and market development, given that we are in early innings with respect to applied artificial intelligence.

What did you do prior to joining iSentium?

I attended the University of Houston where I studied electrical engineering and history.

I started my career working for the US Navy writing signal processing algorithms to look for Russian submarines. Subsequently, I spent a few years at NEC in their supercomputing division before embarking on the entrepreneurial route.

My first startup, Maximum Throughput, supplied racks of servers to clients, including the Los Alamos Laboratory. While at Maximum Throughput, I was invited to join Intel’s Server Advisory Council, which was tasked with providing key inputs to their server technology roadmap.

Terrascale was acquired by Rackable (now SGI Corp). I became COO of the new entity and managed a $500M business.

What was the deciding factor that led you to join iSentium?

With the advent of social media, I saw an opportunity to commercialize text analysis for actionable insights across verticals and domains.

iSentium had a talented team of linguists led by Anna Maria Di Sciullo, a professor at the University of Quebec who had studied under Noam Chomsky at MIT.

I got involved initially as an investor and then joined the company as CEO in 2010. 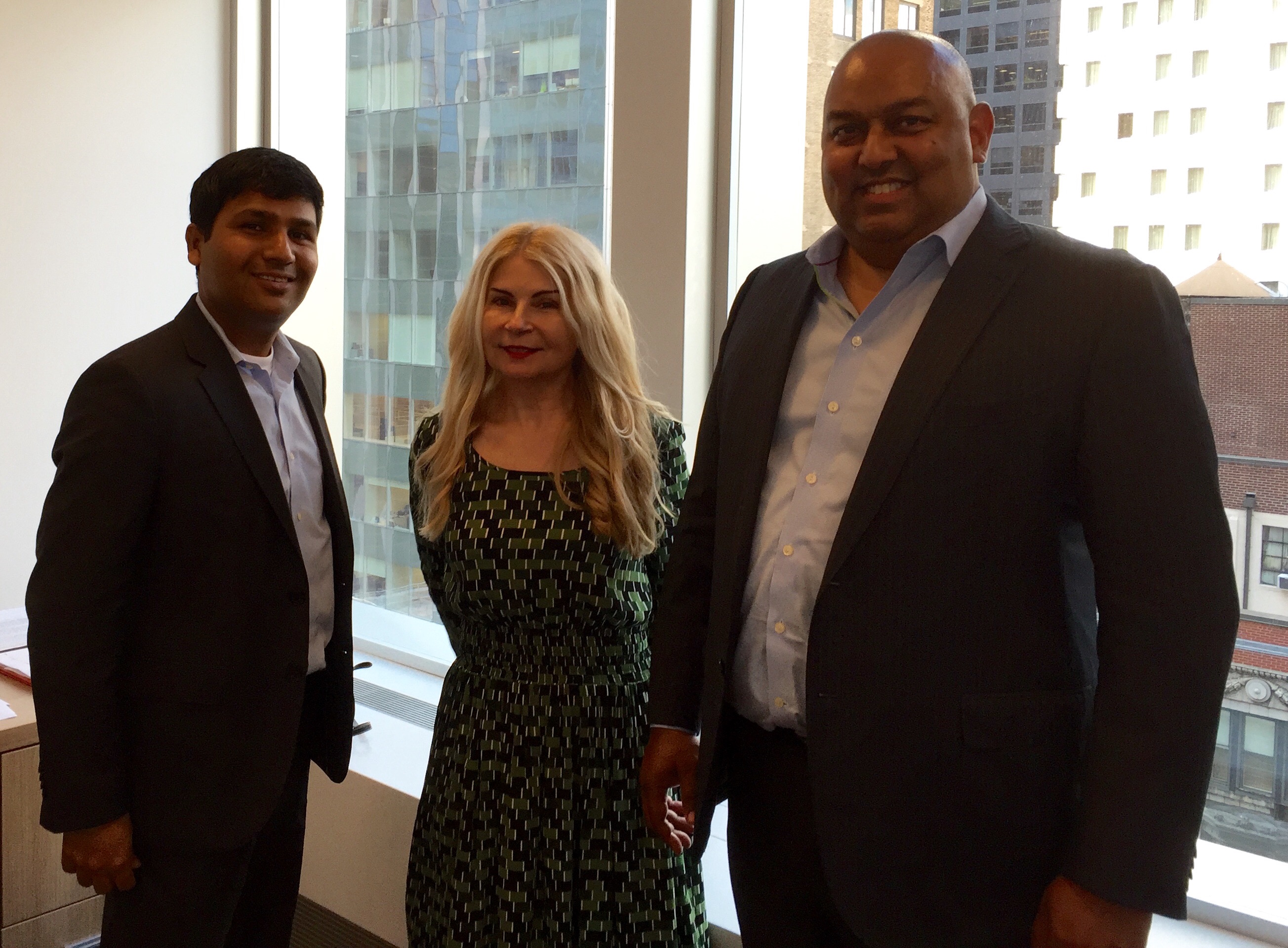 What’s the most challenging aspect of your role?

Educating the market and proving the value of social media data has been a key challenge that we have slowly been overcoming.

The nature of social data is very different from traditional data sets and hence requires new methods of analysis.

That being said, we have done a fairly good job proving the value proposition in capital markets and trading, where you have a binary outcome.

What was the inspiration behind iSentium?

The big opportunity to analyze and interpret a galactic amount of social content was a prime consideration.

Relatively speaking, platforms’ (Google, Facebook) lack of focus on the content made this opportunity even more interesting and attractive.

Early focus and research under the leadership of one of the top linguistics experts provided the right platform to embark on our vision to “Decode Social Sentiment.”

How do you utilize big data and NLP to analyze sentiment in social media content?

Our NLP technology can assign a sentiment score to each message in about four milliseconds and can scale horizontally to process millions of messages per second. 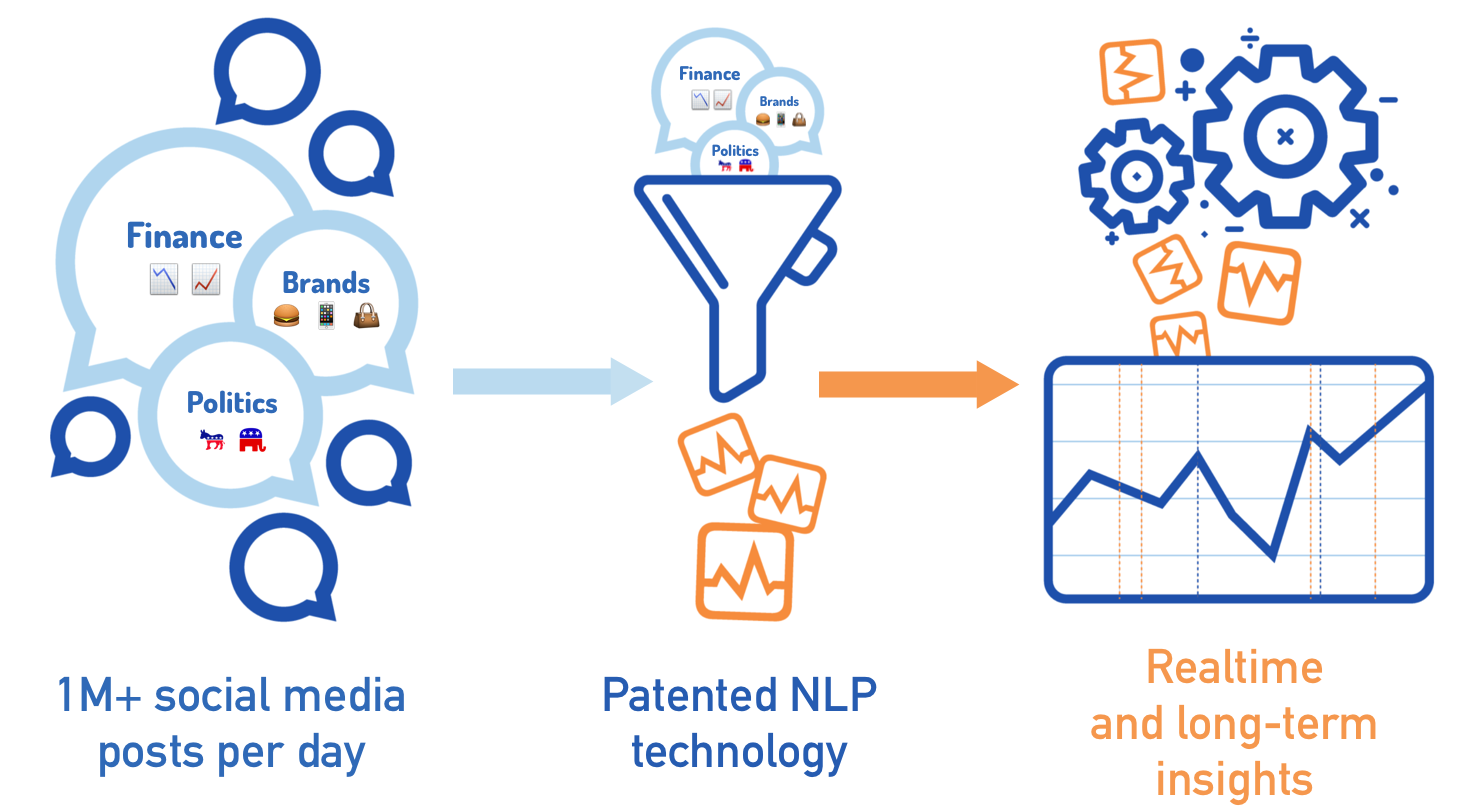 To what verticals are you currently applying your technology?

How has your focus shifted over time, if at all?

We are being approached about leveraging our NLP capabilities to extract consumer sentiment by leading advertising agencies, management consulting firms, and brands themselves.

Where do you see the biggest opportunity in the long run?

While we will continue to deepen our penetration in financial services, we believe the bigger opportunity is in consumer sentiment that applies across industries.

We have already proven our efficacy and ability to mine sentiment cross-vertical, having run multiple proof of concepts on consumer sentiment on fast food and restaurant chains. 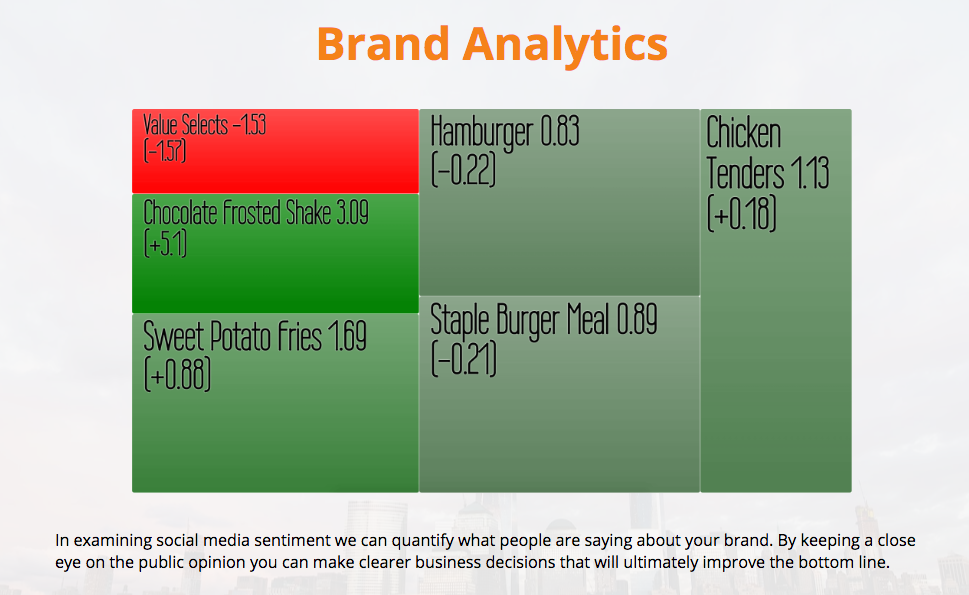 How would you define your key value proposition for customers?

We produce the most accurate interpretation of natural language given a particular context.

For example, in finance, we have reached an 80% accuracy rate where a human agrees with the machine in its understanding of a given piece of text related to the stock market.

How would you describe your typical customer?

Our new product suite for financial services is a real-time dashboard that will enable asset managers and long/short hedge funds to quickly sift through social media data and develop insights for fundamental analysis. 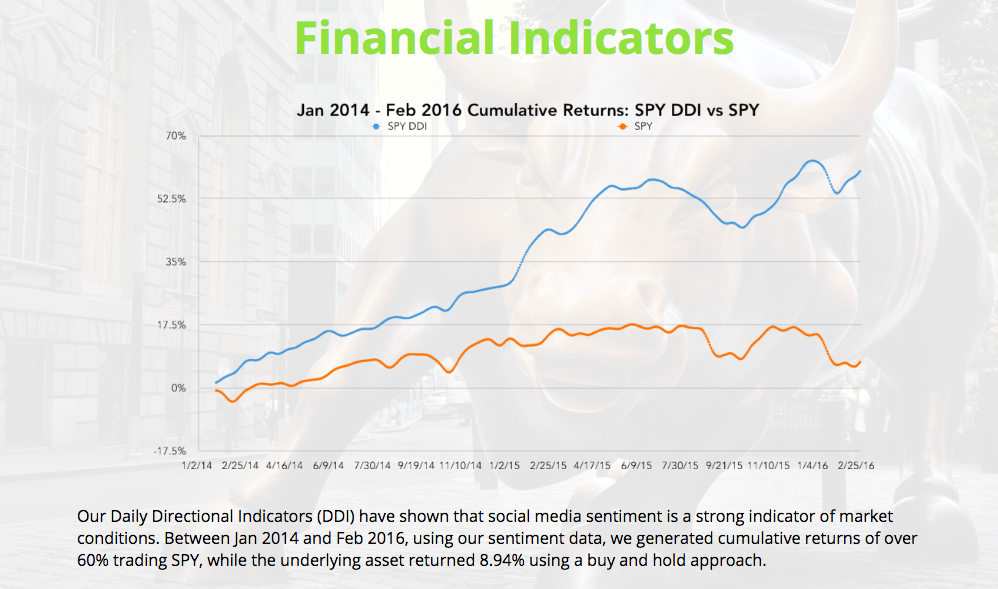 Was the product fully designed and developed in-house?

Our NLP capabilities have been built from the ground up since 2008. At any point, we have had up to six PhDs in linguistics working on the product.

We filed a family of patents in the early part of the decade and have already been granted two patents. We did not use any open source tools.

How much training data do you typically require for a new customer?

We don’t train our models, and there is no machine learning involved.

For stock sentiment, we have a lexicon of about 15,000 words that is used for analyzing text and assigning sentiment scores.

How quickly can your system react to news on social media and adapt your signals?

Depending on signal logic, we can react instantaneously to a burst of social chatter or it can be much slower moving and relies more on continuous sentiment extracted from a much longer time period.

What’s the most exciting trend in machine learning from iSentium’s perspective?

In our view, machine learning does not simulate natural language learning by humans.

Whatever language they are exposed to, humans (particularly children) are capable of inducing a grammar for that language without formal or algorithmic instructions.

In essence, humans are able to learn language deterministically. On the other hand, machine learning algorithms tend to learn from scratch and after extensive training periods.

What advances in machine learning have benefitted iSentium the most?

Instead of machine learning, iSentium relies on an innovative artificial intelligence structure-dependent technology.

This patented technology makes correct predictions on the sentiment of short texts, such as tweets, where natural language constituents are missing, as well as longer texts, which may include non-relevant topical information.

Both covert and irrelevant topical information cannot be dealt with by natural language technologies based on machine learning. For example, in the case of short messages, the covert information is not learnable because it is not explicitly included in the message.

Are there any limitations on machine learning iSentium would like to see removed?

Machine learning is not a simulation of learning expressions in any natural language by human’s brains. It is a matter of modifying the algorithm’s parameters at each step to reduce the error value.

Neural networks are assumed to be non-deterministic algorithms. Non-determinism is one of the limitations of machine learning preventing it from simulating human intelligence.

This is particularly the case for machine learning based NLP applications, ranging from information retrieval to information extraction, including sentiment mining and question answering systems.

The compelling evidence comes from recent discoveries related to the granular modularity of the human brain, which is the biological basis of the human capacity to express simple and complex thoughts using natural language.

Does iSentium consider itself a machine intelligence company?

iSentium is an artificial intelligence company that simulates natural language processing by humans.

Its universal core can be parameterized to any natural language, as well as to any domain of interpretation, including finance, politics, and brands. Effectively, it mimics human natural language intelligence.

We have packaged our underlying sentiment data through a few applications already, including finance, where we have built a significant presence and brand on Wall Street, and are now providing highly actionable solutions to advertising and other verticals.

Apple TV: How to Design and Develop An App for the Big Screen