Excellent UX and UI design can take a product story to a whole new level. But bad communication can get in the way for both clients and designers.

When the UX/UI design process is successful, the result is a fluid product that creates a simple, enlightening experience for the user.

DUX is a UX/UI design studio run by Kristian Lember and Kevin Crepin out of Estonia, and they know all about creating fluid products. Their client list spans from a clever app for restaurant bookings to a service that helps you select the best energy package from your electricity provider.

Much like the trend favoring the Lean Startup model, even big companies are starting to see the benefit of smaller studios like Lember’s over the bigger agencies. Lember said, “Smaller teams are actually becoming more professional and dynamic than bigger [teams]. They are more specialized, focused.”

In the case of DUX, they focus only on UX and UI design. They do what they know and do it really well. As Lember put it, “Like the economy and old habits are changing, so are we.”

He said UX is new for everybody, even people in the industry, so it’s the job of UX designers to be on an “evangelical mission” to explain what they do. Consider this guide part of Lember’s fulfillment of that mission.

They design a concept for how users will experience your product or service through each step of the process. For example, “When the user clicks here, where will they go?” Or, “What will the user do to go back from this step?” UX designers work in wireframes, flow charts, and storyboards.

Rather than designing the process, they design how the product is laid out. While the UX designer is concerned with what pages have buttons and where, the UI designer focuses on how design elements are laid out and how they visually communicate with the user.

Oftentimes, these duties are blurred into one job position, but that’s definitely not always the case. In fact, even with UX and UI design being fulfilled by two different designers, the process doesn’t start with one person and end with the other. Instead, both designers consult with one another throughout the process, which requires a lot of collaboration.

As a client, when you can see the full design process, it’s easier to visualize and understand the end goal. Though these steps can often overlap, this chart will give you a general sense of both the UX and UI designers’ roles in the process. 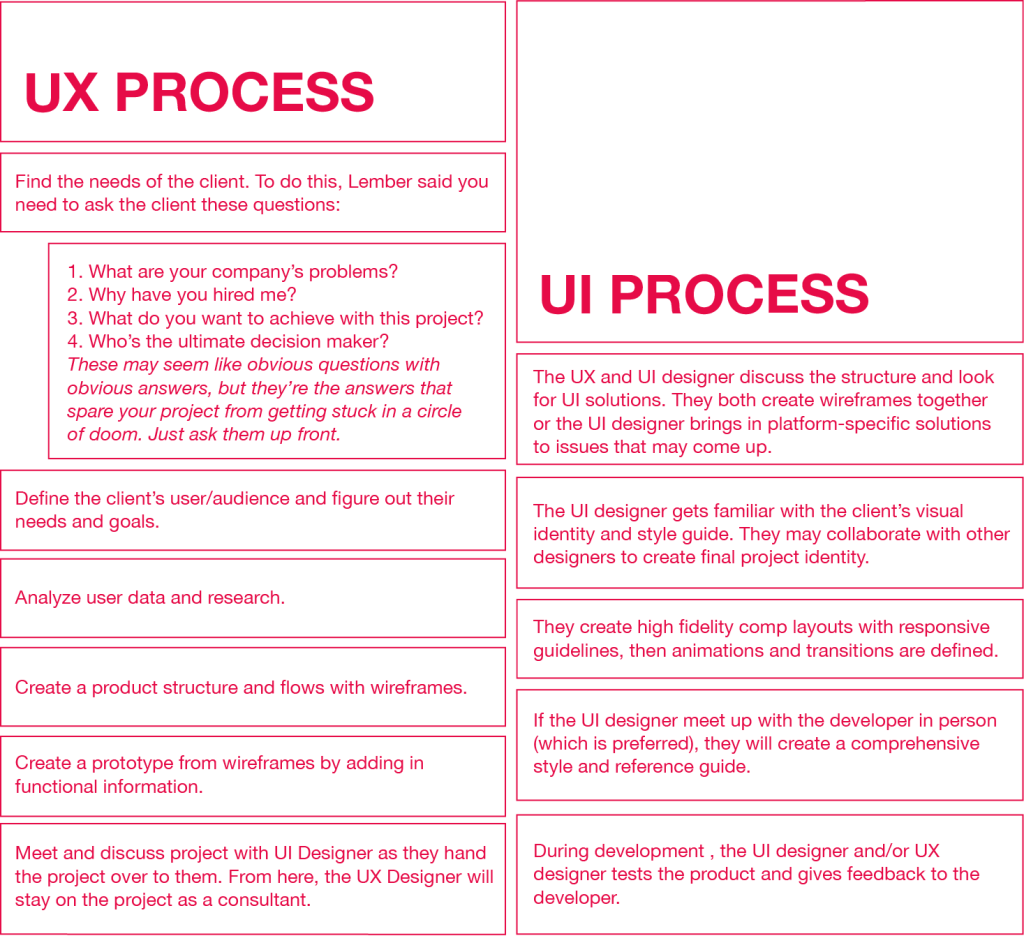 Obviously, keeping the project within the same team through every step of the process is ideal for both the designers and the client. Often (as in Lember’s case) a UX designer will already have a UI designer who they’re used to working with, especially if they’re within an agency.

But, depending on the budget and the client, Lember said that the UI designer is sometimes chosen by the client, which means he has to hand the projects over after only finishing the UX stages.

Lember noted that UX is about the whole experience, starting with asking the client “What is your business?” and ending with testing and improving your results. If the UX designer is only involved in the early stages of the process and not kept on to advise along the way, then the final project may be missing parts of the “big picture.”

Keeping the UX designer on base with the project does not mean that they’re leading every phase of it. For example, Lember has asked clients to sit in with their in-house designers for a week so that he can get an idea of their process and aesthetic.

He said he learned more from this observation period than he could have in a meeting with management. He was able to see glitches in the inner workings of the design team’s operations, and the team was over-the-moon to participate in this new form of collaboration. They were able to focus on the bigger picture, so the entire team could work toward that one goal.

He said when possible, it’s helpful to actually work in the client’s office for about 70% of the project right alongside the person in charge. Of course, the bigger the client, the smaller the chance of this opportunity.

He added that it’s important to be friendly, but not nosey and keep the mentality that you’re there to learn. All in all, this process not only keeps lines of communication much shorter, but brings more transparency and therefore more trust. Not to mention, a faster turnaround on both ends.

Know the Pain Points (So You Can Avoid Them)

Whether you’re a client or a designer, knowing the most common pain points in these relationships is key to noticing them before they get too far, or even better — to avoiding them altogether. There are several pain points that Lember encounters often:

Know When to Cut the Crap

Lember said that, though it can be hard, there are times when you have to help your client face the facts with a healthy dose of the truth. He said, “That’s why you get paid. When decision making is all over the place … stay focused and don’t go along with that.”

To stay focused, he said to explain and defend your vision, adding:

“When [a] client cannot make decisions, it usually means that they don’t trust you or you are not dealing with the management-level person in [the] project.”

If it’s a trust issue, you have to make earning their trust a top priority. He advises to do this by staying calm, being professional, and giving the client your undivided attention.

If it’s a matter of talking to the person in charge, then try to talk to that person directly, If that’s not possible, Lember said, “Face the issue with [your point person] and ensure [him] that you are on his side.”

Know When to Touch Base

No matter what sort of work you put into a client’s project or in what capacity, it can be a real bummer to revisit their site or app a year later to find that all of your work has gone down the drain.

That happens to everyone, even Lember. And when it happens, you can either curse the client’s name out loud to whomever is in the room or just reach out to them directly (preferably without any cursing). Lember suggests the second option.

He said that reaching out to clients after the project is complete — especially if they’ve abandoned the design — is part of the responsibility of owning a studio. It continues (what is ideally) a good client relationship.

Lember said the email to a client may look something like this:

But it’s worth noting that all of this can probably be avoided by making sure the project doesn’t get siloed into exclusive stages. Much of the process from UX to UI designers overlap and the more that they are able to communicate with one another, the more likely the final product will be a cohesive project that the client will love, and even better — one that’s sustainable. It’s a team effort all around.

Lember said that, down the line as components of the project get further away from the base UX, the design can get a little messy in its strategy.

He said that instead of reaching out to him directly about the UX, clients will often just rush to launch, and these lapses in UX are just lumped in with what he calls “friendly fire” in the design battle.

Know How to Keep Moving Forward

Clients have to know what they’re looking for in a UX project, and UX designers have to anticipate their clients’ needs. To do this, it’s good for the client to know what they want from the project in terms of conversion rates and ease of use. Meanwhile, the UX designer has to keep up with the industry, which can actually be harder than it sounds.

When you spend too much time with your head down, you can easily get left behind. Lember said, “You have to have an open eye for everything.”

This applies to your daily life, but also when researching and reading about lead market developments and new technologies. He said he also likes to collaborate with other creative people outside his line of work so that he can better see things from all angles.