How Three Apps Are Reviving the Power of Audio Messaging

This new fleet of audio apps is trying to get people talking again.

Phones used to be all audio — no screens or Internet. Just voice and sound. But obviously, we’ve come a long way since then.

Jeff Baxter and Thomas Gayno were working for five years in Google’s Creative Lab and together they had a hand in a lot of how we use our post-landline gadgets. They worked on brand, product, and marketing for everything from YouTube and Maps to Drive and the Nexus.

While working at Google, though, a lot of their focus veered to wearables and they noticed that, for these small screens on our wrists, we’re going to rely heavily on our voices again. There’s going to be an audio revival in tech — at least that’s Baxter and Gayno’s hypothesis.

And with that, Baxter said you’re losing a lot of the nuance and emotion that comes with communicating with our voices. So a year ago, they left Google to create one new project each quarter, “with the goal to reimagine how we use voice to communicate on phones today, but [more specifically] on things like watches, glasses, and in your car.”

Baxter and Gayno talked to me about expanding messaging to audio to improve how we talk to people on a practical and emotional level. 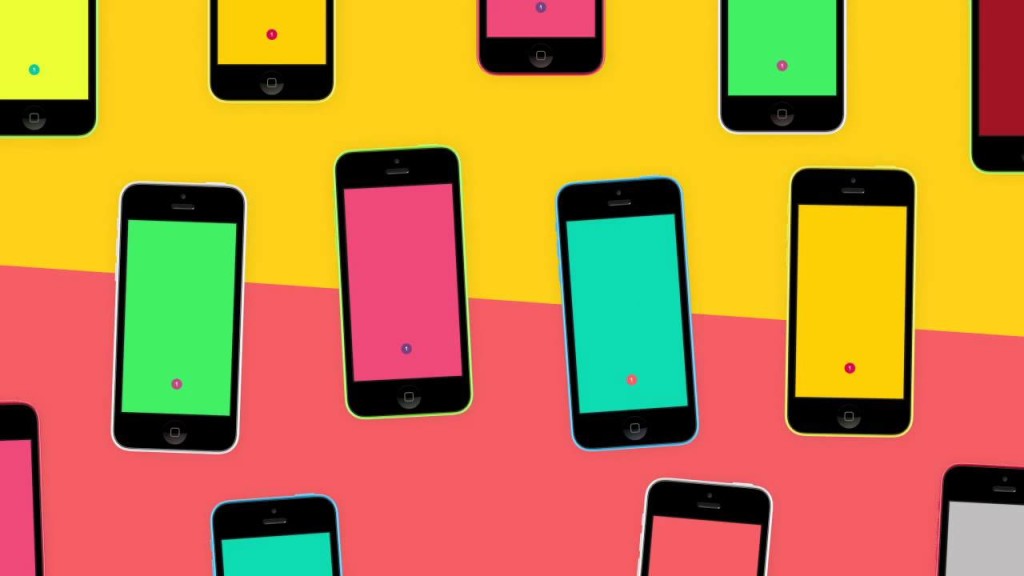 Their first project, which launched in September, was Cord, an app that lets you use voice chat among your contacts with one tap. Next came Shhout, an app to broadcast your voice to all of your friends at once. And most recently (April 16) came Chhirp, an app to share 12-second broadcasts straight to Twitter.

Back in September with their flagship launch, a lot of other voice messaging options were popping up. iMessage, Facebook Chat and WhatsApp all got audio features, which for Baxter and Gayno was both good and bad. Baxter said, “It’s validation that voice is important and it gives us some really big players to be going up against.”

But adding voice messaging isn’t as simple as just adding an audio feature. There’s a reason that we slowly fled to texting — convenience.

When phones went from landlines to cordless gadgets we carry around 24/7, Baxter said “calling someone became much more of an interruption to life.” So to master audio messaging Baxter and Gayno are taking the best aspects of how we message now and combining them with audio to create a whole new way to communicate via voice.

Gayno said it has much to do with “being able to communicate on your own terms … whenever you’re ready.” He said that when you’re calling someone, your contact with them is dependent on their availability, but with audio messaging you get the quality of a call at a time that’s convenient for both of you and that, he said, is a freeing feeling.

Even with three clever apps already under their belts, they’re still handling them with some experimentation. With each app, they’re still learning where and if there’s a place for voice in how we communicate with one another. 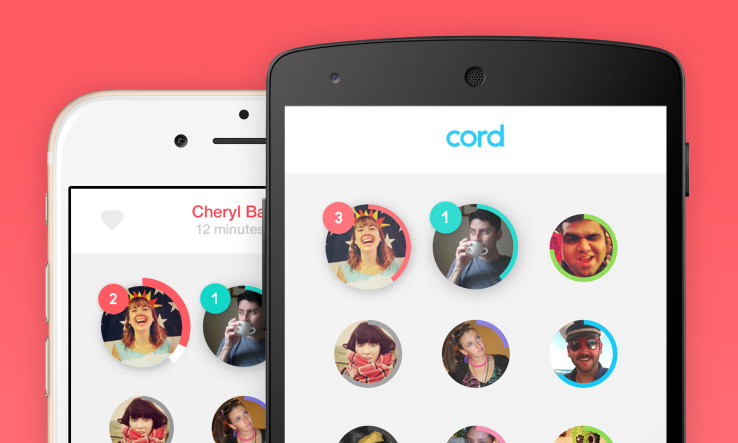 The Conversion to Audio

In the US and the UK, voice messaging is still sort of a novel concept, but that’s not the case in places like Asia and South America.

Gayno says that a lot of this has to do with cultural norms. For example, in China, the characters on their keyboard make typing really inconvenient so you’ll see many more people on the street talking into their phones rather than just typing.

In fact, only 16% of Cord users are in the US. The interface of the app is so simple and image-based that there’s little to no text translation necessary, and it’s really easy for anyone around the world at any age.

You just press and hold on someone’s face to record and send them a voice message — and Shhout and Chhirp are very similar in their functionality. Gayno said his 2 year-old daughter even uses the app to talk to her friend.

So what’s keeping most Americans from picking up on the audio messaging trend? “You have to change users’ behavior to get used to using [their] voice,” Baxter explained.

With the increased use of wearables, this learning curve will probably decrease. Baxter said that, while they have a Cord app for Apple Watch, the platform is still very locked down for third party developers and they don’t yet have access to the speaker voice microphone. So you can listen to a message from your Apple Watch, but you can’t send one. Their upcoming Android Wear app will work both ways.

One thing that’s bringing more Americans around to using voice messaging is our car time. We spend more time driving than in most countries and voice messaging is a much safer, less hands-on way to communicate while on the road. It’s also much faster for most of us to talk than it is to type, and there’s no need to abbreviate or try to find a quirky emoji to express our emotions.

There is something far less practical about that moment when it really clicks and a person becomes sold on audio messaging. For Baxter and Gayno that moment didn’t come until after they’d built the prototype for Cord.

At the time, the only people on the app were their wives and friends. They were leaving a meeting late and Baxter was sending his wife a simple voice message saying, “Hey, we were late at the meeting. I’ll be home in like ten minutes. Love you.”

Gayno laughed because Baxter said “I love you” at the end of his message which is something that most of us wouldn’t have included in a text. “I’m now saying ‘I love you’ more in my mundane, everyday messages,” Baxter said.

Whether people use it on the road, as a more personal alternative to text or just as a time-efficient option, Gayno said that Americas are very loyal to the product.

“I think people who give it enough of a try eventually have that kind of click and then they’re hooked,” said Baxter. 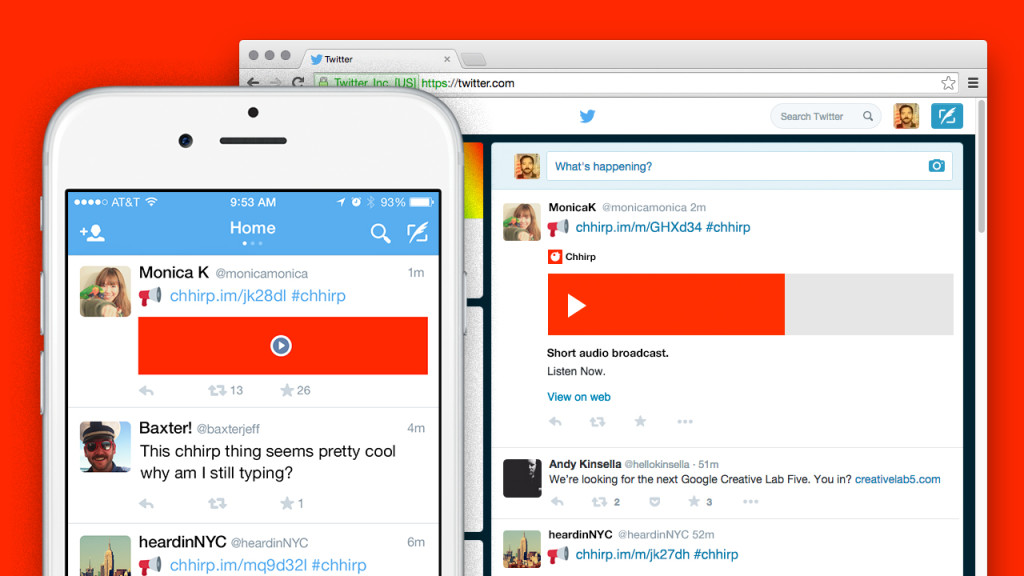 They got the idea for Chhirp when they noticed how often people were using Cord for group messaging. Baxter often used it to send a bunch of people a “Happy Friday” message at the end of each week. But with Chhirp, they can send audio to the Twittersphere simply, and as more than just an alternative to text.

In 12 seconds, people are experimenting with how audio can be used on Twitter in some exciting ways. One way Gayno mentioned was that some people are using the text of a tweet to set up a joke and they’re using the Chhirp audio to say the punchline. Another fun thing to do is sing people “Happy Birthday.”

One use case that surprised even Gayno and Baxter was a more journalistic approach. A woman in the UK used Chhirp at a charity event and she did 12-second interviews with people all night asking them what this charity meant to them. She’d post the interview and tag the interviewee in the tweet.

Gayno said they’re really learning “how powerful it is to use voice to share information and emotions and ideas and thoughts … with a huge array of people.” 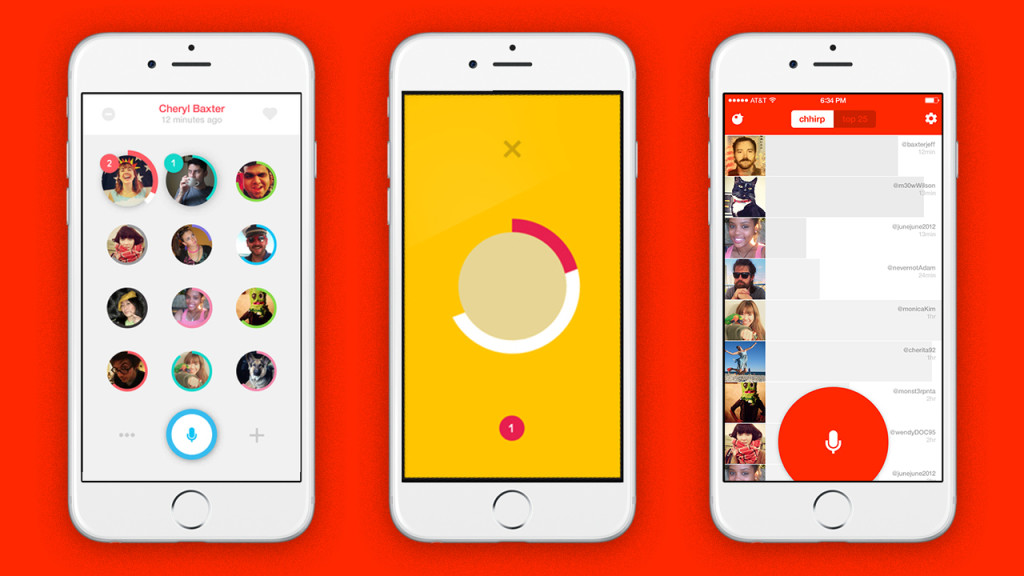 A Suite of Apps

When Baxter and Gayno set out to make one project every three months, they were coming off of the momentum of the Google Creative Lab where they were doing a lot of experimenting and keeping up a fast pace. Baxter said, “It actually came out of the realization that it’s so easy to make a simple iPhone app or Android app.”

With this methodology, they were able to test things more quickly. And it’s easier to test ideas that are still in their infancy rather than add on to existing ones.

Even though the group of apps they’ve created are all audio-focused, they each serve their own specific purposes. So each effort doesn’t quite work as a feature. Also, that takes more work than just building a whole new app altogether.

For Chhirp, “We could take Twitter’s API and we could actually build a proof-of-concept app separate from our main application,” explained Baxter. 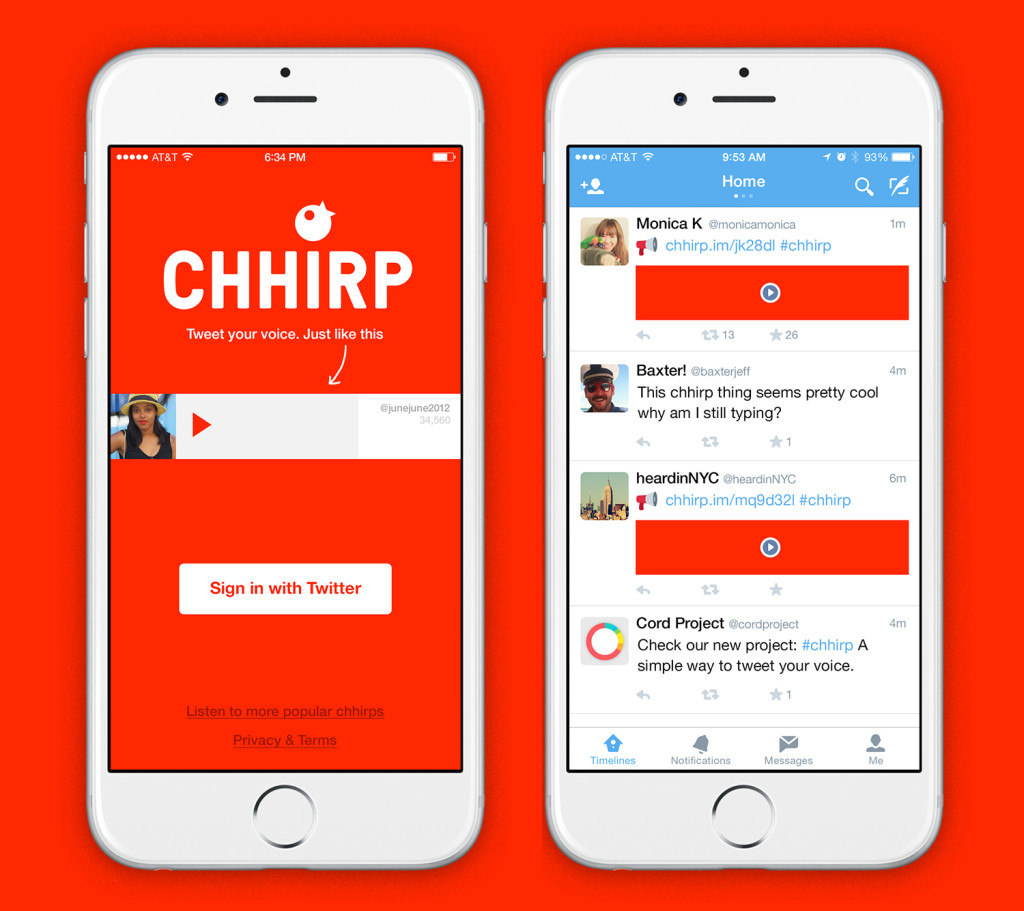 The Future of Audio

Right now the user base of all of their audio apps combined is in the hundreds of thousands and growing, with Cord having the most users. Chhirp is gaining a lot of traction, and Baxter points out some really cool Chhirps they’re hearing on the daily.

They expect to focus more on ways to play with and expand on group messaging as it’s a really popular component of Cord. Oh, and if/when you download Cord, the Cord team will be your first friend. They’ll send you a little intro message and should you choose to respond, you can bet that they’ll hear it.

The guys said that they have an iPad in the office hooked up to their account and they try to listen to and respond to a lot of the messages. Baxter said, “It’s a fascinating window into the voices of the world.”

If you want to get in on the audio goodness, download Chhirp (iOS), Cord (iOS and Android) and Shhout (iOS) for free.

All images were provided by Baxter and Gayno.