While we’ve all been passively “turning pages” in our eBooks, Sherisse Hawkins of Beneath the Ink wanted to bring more to the digital reading experience. She says that, until now, it’s been “nothing more than text under glass.”

Hawkins‘ career before Beneath the Ink has taken her from being a Walt Disney Imagineer to VP of Software Development at Time Warner. But with her background firmly rooted in the intersection of creativity and tech and a passion for printed words, she wanted to improve the digital reading experience.

In our interview, she told me that one of her first steps was looking for someone to help her build out the concept. She put out feelers to find someone to come on board as her technical cofounder but was having trouble finding anyone in her immediate network. “It’s hard to jump out of a stable career and into entrepreneurship,” she explained.

Luckily, she has a friend who’s a professor at the University of Colorado who suggested one of her students, Alex Milewski. Hawkins and Milewski certainly didn’t meet under the pretense of starting a company together, but after finding many shared interests, carrying out some contract work and only meeting in person four times, they both applied to the Innovyz accelerator program in Australia. They got in and flew across the world for the 13-week program in the summer of 2013.

(After this, read up on last week’s Startup Story about how a former Mozilla product designer is disrupting the fashion industry for good.) 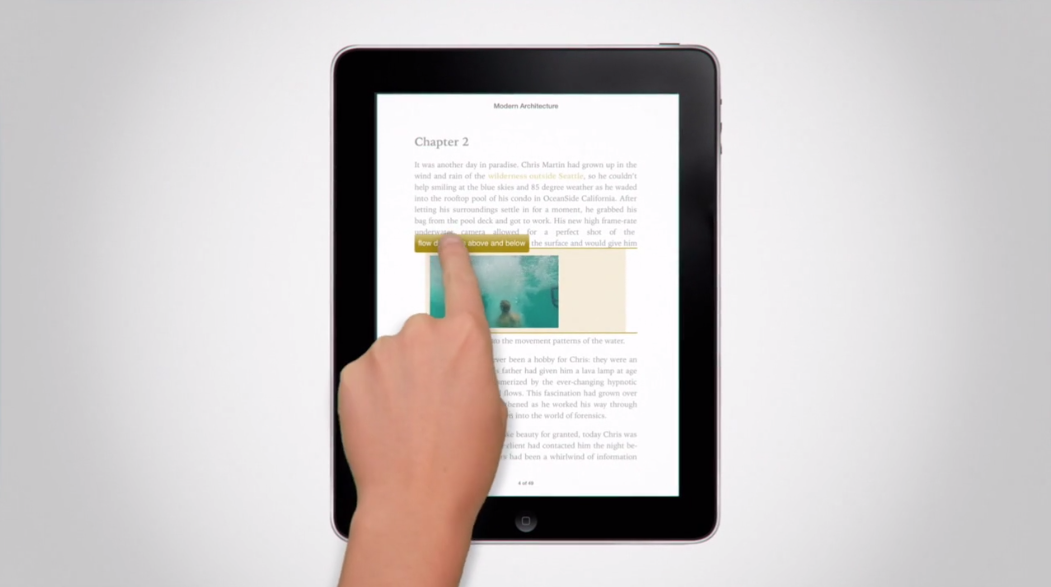 Their first idea for bringing more to the digital reading experience actually harkens back to paper books with embedded puzzles and ciphers. Hawkins felt that these books (like Scholastic’s The Secret Hideout) were adding a third dimension to reading, and she wanted to do the same thing with eBooks.

She said they wanted to “create a way to make it faster [and] easier for mere mortals to create those kinds of books.”

The puzzle approach of adding extra mystery to books wasn’t a total bust. Not at all. In fact, while testing it with people at Innovyz, Hawkins and Milewski had people staying to play with the technology for up to two hours. But ultimately it wasn’t the game-changing solution they were looking for.

Hawkins explained, “It was more of a feature. More of a kind of interesting element to a book. It wasn’t the core that you can build a whole business around. So we learned from that.”

To make a product that was more mainstream, they had to create one that could work with most books. She said that, at that point, it wasn’t a fully formed idea, “but we knew we had enough there to expand on it, try it out, test it and see what we could come up with.”

What they came up with were Binks. Binks are basically the solution to leaving what you’re reading when you have to Google a word, character or place. Instead, when you click on a Bink (which is indicated by being a gold, bolded word) in a text, you get adjacent information in the form of anything from text or an image to audio, video and even a panorama feature in which you can get a 360 degree view of a place. It’s a seamless way to get more out of what you’re reading without interrupting the experience.

Returning from the accelerator with a working prototype, Hawkins and Milewski attended a conference to show people how it worked. When most people in the publishing industry first heard about the Binks feature, they were skeptical because most eReaders have a function called reflowable text. This simply means that when you change the size of the text, the length of the book fluctuates.

Hawkins said that it was admittedly a difficult problem to solve well. But, to the amazement of skeptics, Milewski had the working prototype on an iPad in his back pocket. Hawkins said,

“So that was the first break when we realized that we were onto something that people thought was not possible to do and it gave us even more excitement … to get it out to the world.”

Bringing It to Focus Groups

While they aren’t testing Binks as often as they were early in development, they’re still doing it pretty frequently. Beneath the Ink’s demo group spans ages 8-80 to see how everyone experiences this technology.

Interestingly, no matter what the age, they all liked the same things about Binks:

Hawkins compares the Binks experience with a 3D movie. She said, “Sometimes you want the fist to come out of the screen and punch you in the face and sometimes you … have a much more subtle level of depth in what you’re viewing.”

She said that focusing in on that subtlety means avoiding the “If I can do it, I should do it,” mentality. Still she said they’re “going to the very edges of what transmedia offers,” to get the most impact with the least amount of invasion. Hawkins added,

“We found that when we did it artfully, it’s fantastic, but people like to read and they like to hear their own voice in their own head. They like to see things and engage with them at their own pace, because reading is very much about your own pace. So when you drop them into say, a video, you have to be very careful about when and how you do that because it can be whiplash to move from [one] experience to the other.” 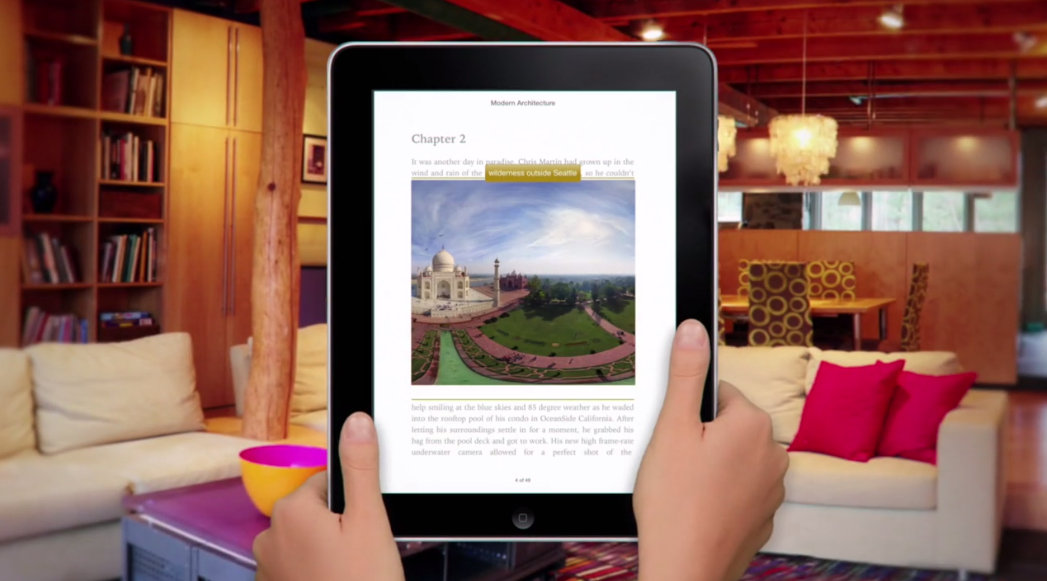 An Open Mind = An Open Audience

Overall, the mission of Beneath the Ink has always been to add more interesting things to eBooks. Hawkins said, “Our tool is content agnostic so anything that’s digital text, we can support, and we welcome all types of ways to use it that maybe we haven’t even imagined.” Their open-mindedness has led to just that.

By putting the technology out there and not binding it with a ton of constraints, they were able to see beyond even what they’d envisioned for Binks. Other than eBooks and web reading, they’ve seen corporations use Binks to change the way they communicate through long-form text. They’ve also had people use what they call the micro-book approach, which basically gives you a taste of a book in an interactive way to let you see if you want to buy it.

They’ve even had people use Binks in genealogy research and wealth management portfolios. Hawkins thought, “Wow, that’s a perfect application for that.” She said that these little pockets of information are great tools to help you feel smarter and brush up on vocabulary while you’re reading.

The technology is as fluid on the content creator’s end as it is on the reader’s end. They can simply highlight words and drag and drop the content that they want to show up.

It’s up to them if they want the Binks version of their content to serve as the only way to read the text or as a separate edition altogether. Bestselling author John Shors has replaced “plain text” versions of his eBooks with the Binks editions because he knows that’s what his readers prefer. 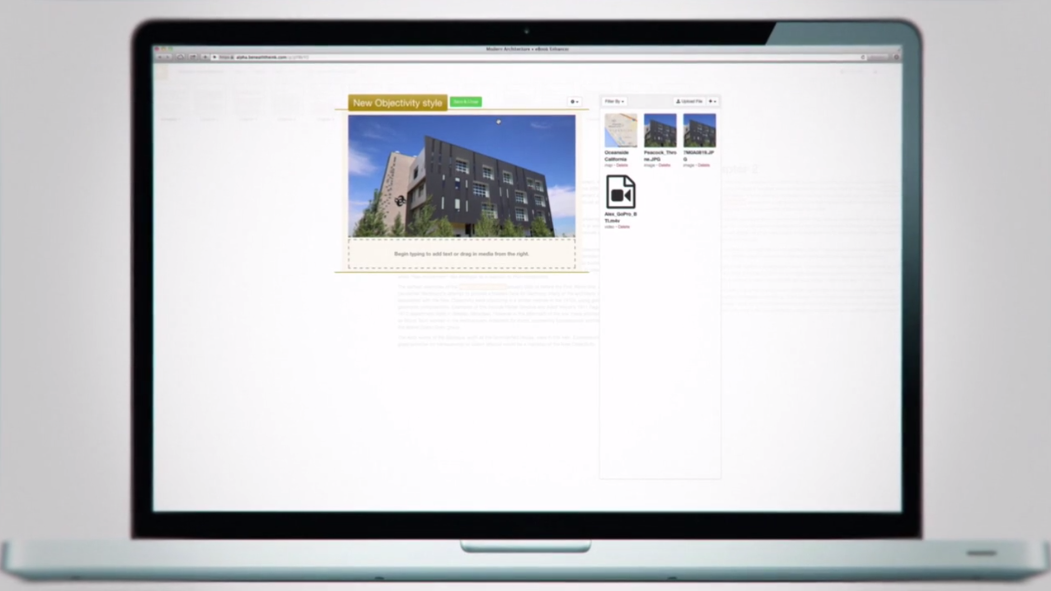 While keeping the platform so open to interpretation has had many perks, I wondered if giving so much control to the content creator could work against their mission of subtlety, and instead allow Binks to fall victim to that cheesy 3D effect that Hawkins mentioned.

She said, “Ultimately, it’s really the decision of the author or the content creator that we want to support. Overall I have to say that’s worked out really well. We don’t have any mandates, we just have some guidelines that we recommend.”

Right now, they suggest one Bink per 5-8 pages, but she said that may change as more people get used to the experience. However people use it, Hawkins said the goal is always to delight. She wants every Bink to lead people to think, “Oh I’m so glad I opened that.”

Even with all of the exploration people have done in using Binks for more than fiction and non-fiction, Hawkins would love for someone to bring Binks into young adult or fantasy literature. She said, “I’ve got an open call out to the world to see what that might look like.” 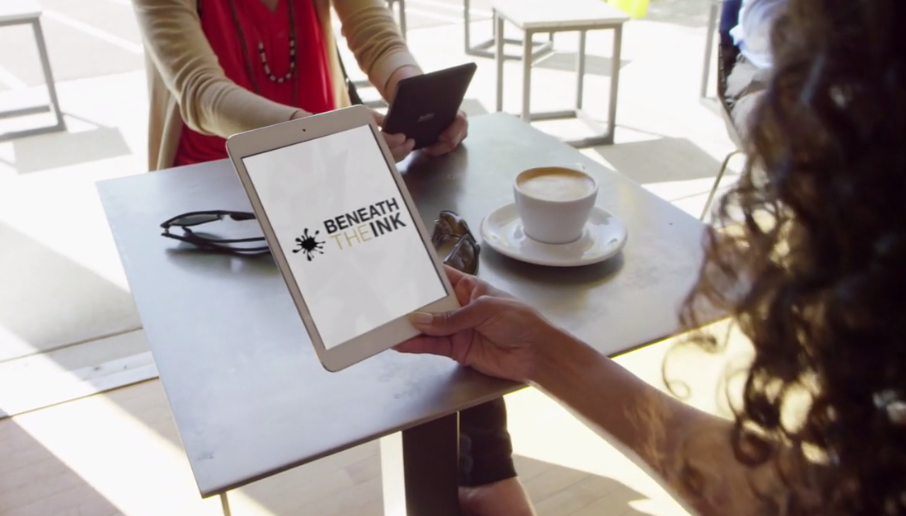 So far, Beneath the Ink hasn’t done any mass advertising. Hawkins said, “The publishing industry is a pretty tight knit organization,” and so their success at industry conferences and speaking engagements has led to a lot of traction and word-of-mouth publicity. In fact, they won the Digital Book World Award last January.

I asked Hawkins what she thinks is still missing in the world of digital reading. She said, “A vetted library … of Binks will be a very interesting way for people to quickly access very high-value extra content.” Kind of like an encyclopedia or dictionary of supplementary information to what’s already available in a Bink-enabled read.

She added, “As a reader, I want to have the tendrils from my book be able to bring me really cool, interesting surprises … without me having to put the book down and search for something and go into browser mode.” On the other end, she said, “As an author … It should be a really fun, easy and fast experience, so we really work hard to make sure that’s the case.”

Hawkins and Milewski’s collective passion for improving the digital reading experience is what continues to drive them to go after their vision of what Beneath the Ink can be. According to Hawkins, when you’re an entrepreneur, you really can’t have it any other way.

She said, “If you’re going to spend as many hours as we spend creating a product, it’s important that you have a really, really deep core passion about it.”

You can test out Binks for yourself on the Beneath the Ink website and even download some free books on iTunes.

Images were provided by Beneath the Ink.

How to Start a Startup: Operational Insight from Keith Rabois