It’s that time of year again — on campuses across the country, millions of young minds are donning caps and gowns and getting ready to embark on life after school.

Although some of us may feel far removed from that experience, we can still find inspiration in the new graduates’ bright futures and, of course, in commencement speeches.

A number of impressive tech leaders took the stage this year at ceremonies throughout the U.S. to share advice about entrepreneurship, technology, and life.

Here’s a round-up of noteworthy speeches: 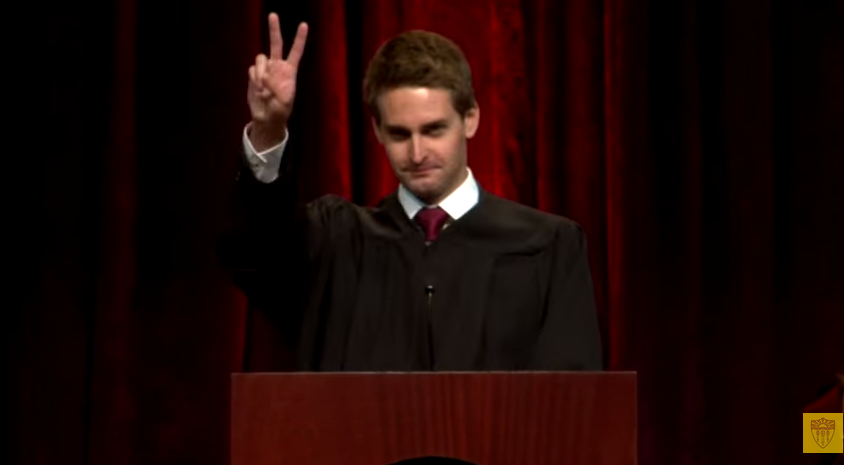 Evan Spiegel opened with a story about his own graduation ceremony at Stanford University. The catch was that he wasn’t actually graduating: Spiegel didn’t finish his credits in time, but Stanford let him walk the stage and handed him an empty folder.

The memory reminded him that “oftentimes we do all sorts of silly things to avoid appearing different.”

Since leaving Stanford, Spiegel co-founded Snapchat, which started off as a class project, with two of his fraternity brothers. He is now the 24-year-old CEO of a company that may be worth up to $15 billion.

Here are some words of wisdom Spiegel shared at USC:

“When we decided not to sell our business, people called us a lot of things besides crazy — things like arrogant and entitled. The same words that I’ve heard used to describe our generation time and time again. The Millennial Generation. The “Me” Generation. Well, it’s true. We do have a sense of entitlement, a sense of ownership, because, after all, this is the world we were born into, and we are responsible for it.”

“You already have inside of you all of the amazing things you need to follow the dreams that you have. And if you get stuck along the way there’s a ton of free information available on the Internet.”

“You are going to make a lot of mistakes. I’ve already made a ton of them — some of them very publicly — and it will feel terrible, but it will be okay. Just apologize as quickly as you can and pray for forgiveness.”

“There are times it may be hard to see your own impact. I beg you to remember that it is not possible at this time or any time to know the end results of our efforts.”

“Please voice your dissent, anticipate your erasure, and find something you aren’t willing to sell.” 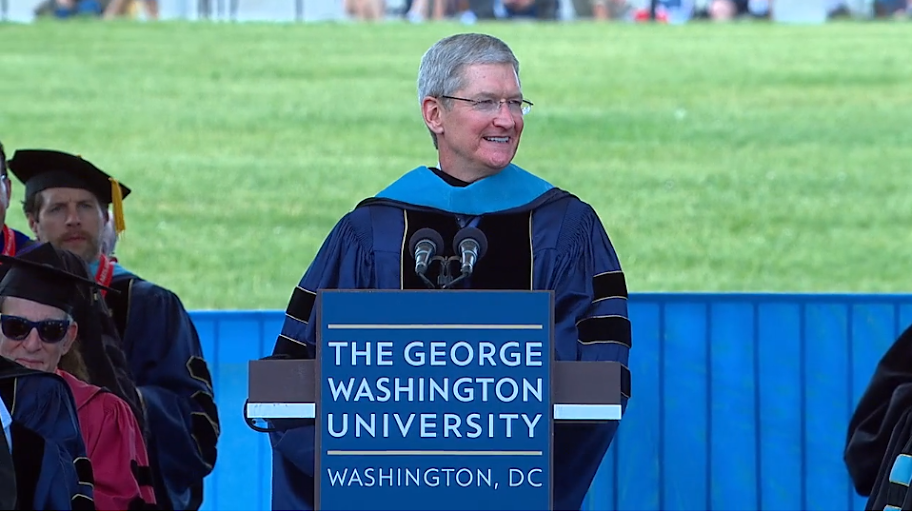 In his commencement address, Tim Cook talked about justice, equality, and optimism. He brought up Martin Luther King, Jr. several times and discussed his own childhood in Alabama and visiting the nation’s capital as a teenager.

Cook, who has been at Apple for 17 years, also talked fondly about Steve Jobs: “I felt work was work … Steve didn’t see it that way. Steve was an idealist. He convinced me that if we worked hard and made good products, we too could change the world.”

“It’s about finding your values and committing to live by them. You have to find your North Star, and that means choices. Some are easy, some are hard, and some will make you question everything.”

“There’s opportunity to do work that’s infused with moral purpose. You don’t have to choose between doing good and doing well. It’s a false choice, today more than ever. Your challenge is to find work that pays the rent, puts food on the table, and lets you do what is right and good and just.”

“A friend of mine at Apple likes to say that the best way to solve a problem is to walk into a room full of Apple engineers and proclaim, ‘This is impossible.’ I can tell you, they will not accept that — and neither should you.”

“Great progress is possible, whatever line of work you choose. There will always be cynics and critics on the sidelines, tearing people down. And just as harmful are those people with good intentions who make no contribution at all.” 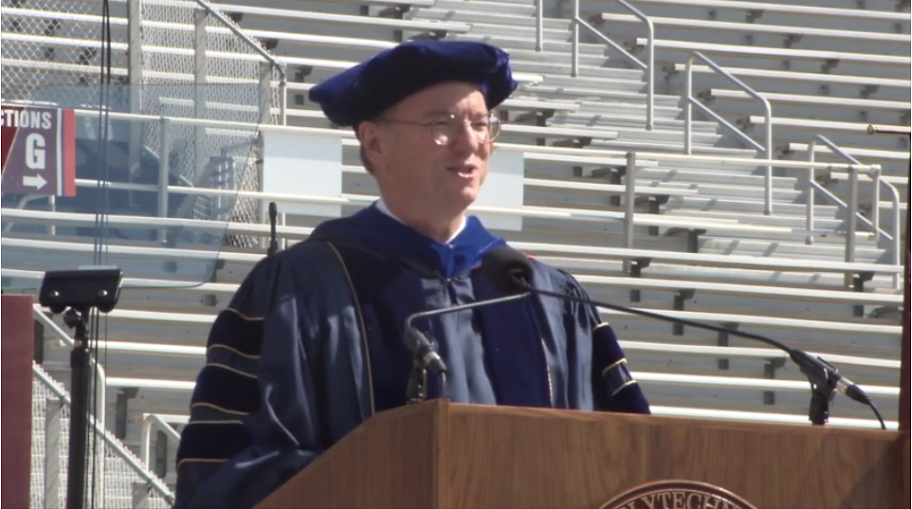 Eric Schmidt’s father taught economics at Virginia Tech, and, in his commencement address at the university, he spoke of the close community in Blacksburg.

Schmidt praised advances in technology. He told students that their cell phones were two trillion times more useful than the IBM computer (the only computer on campus) that he used at Virginia Tech 40 years ago. He also predicted that we’re at the onset of a revolution much greater than the Industrial Revolution.

Below are more of Schmidt’s thoughts on technology and living a fulfilling life:

“Your generation’s opportunities are far greater. You’re connecting to each other in ways that were not possible before … the connections are what make us human and make us stronger. If you’re awake, you’re online … don’t take that power for granted. What you carry with you everyday could change the world.”

“It’s true that we have the knowledge at our fingertips, but just because we know so much doesn’t mean our problems go away … the technology doesn’t work on its own. It’s just a tool. You’re the ones who harness its power. It’s up to you to know your environment and to use these new tools at your disposal in the smartest and most effective ways possible.”

“Be curious. Ask a lot of big questions and go out and try to find the answers. Don’t accept traditional or conventional wisdom.”

For more insight, check out the video of Schmidt’s speech here. 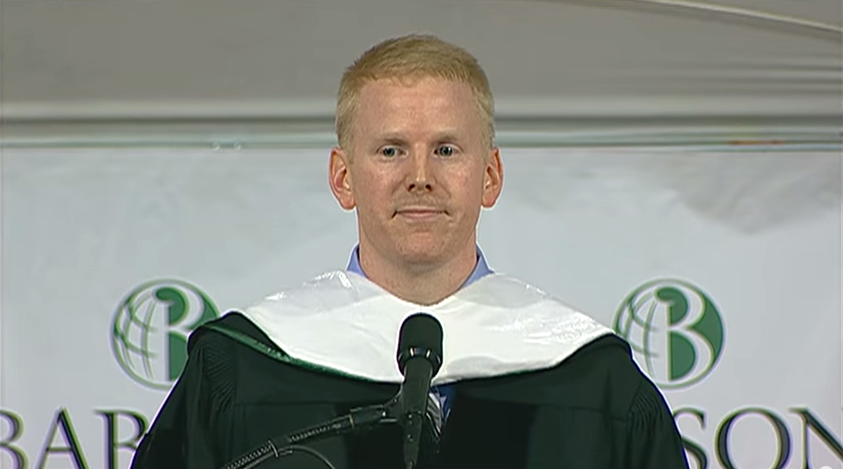 Kevin Colleran was one of Facebook’s earliest employees and spoke at his alma mater about working for someone else while still staying true to his entrepreneurial spirit.

He shared that he initially turned down Facebook’s offer, explaining, “Why would I say yes? I was an entrepreneur! That meant being my own boss. There was no way an entrepreneur could be anything other than his or her own boss, and I was convinced of it.”

But, after failing to sell his company to Facebook, Colleran decided to accept the offer. At one point, he was the most tenured employee at Facebook other than Mark Zuckerberg.

Colleran has since left the company and launched his own venture capital firm, Slow Ventures, which has an investment fund of $80 million. He claims he wouldn’t have been able to start his own VC firm if he hadn’t worked for someone else.

Here is more advice that Colleran gave to Babson grads:

“You do not need to work for yourself and start your own business to be an entrepreneur!”

“If you can’t imagine a world different from the one you see today, you will never be able to build a better one. I learned that while working for another company, and I see it today in my current work as a venture capitalist. No matter what path your career takes, even if you are taking a ‘regular job’ at a large company, remember you are building the skills necessary for real entrepreneurship.”

“It is better to prepare than to plan. Don’t try to plan for your own big opportunity, but instead make sure you are prepared and ready for when it comes.”

“There is no way to make your dream job or your dream business opportunity materialize precisely when you’d like it to. But it is possible to spend your time ensuring you’ll be able to make the very most of that opportunity when it does come your way.”

“Build your career and develop friendships and relationships in a way that — when you do have a reason to look back on it all — there’s nothing you would change.” 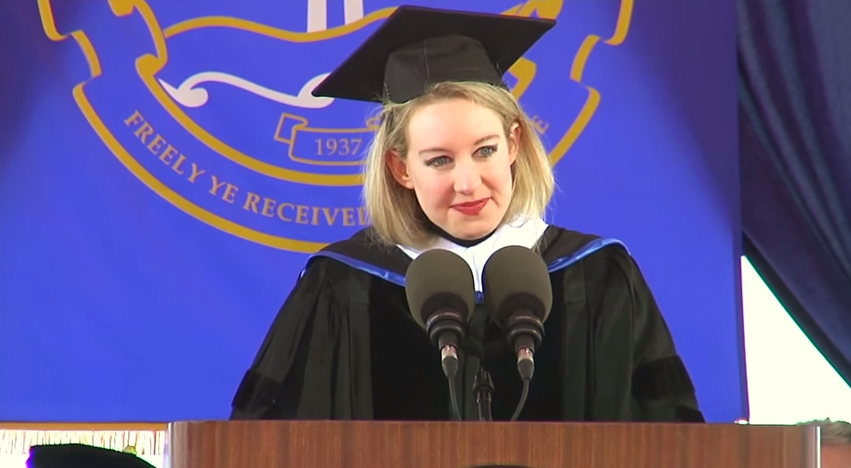 Elizabeth Holmes dropped out of Stanford University when she was just 19 to start Theranos, a health technology company that is revolutionizing medical testing. With only a couple of drops of blood, users of Theranos can run a few dozen lab tests without needles or high lab prices.

The medical world, as well as the tech world, has praised Theranos for reducing pain and costs for users and for using technology to truly advance efficiency and the greater good. And Holmes has seen financial success come as a result of her good work: last year she made her “debut on the Forbes 400 as the youngest self-made woman billionaire.”

In her commencement speech at Pepperdine, Holmes spoke of the difficulties of starting such a dynamic business in a stagnant industry and how rejection and failure are the greatest tests in life:

“In the journey to building a purposeful life, we’re always tested. When I first started our company, almost everyone I met told me there was no way I would succeed and that I should go back to school, and as we began to succeed, the number of people who started attacking and trying to tear us down grew even greater. When it’s hardest is when it matters most to stay the course.”

“I started Theranos because I believed that building a business is a vehicle for making a difference in the world, that you can do well by doing good.”

“We codenamed our product the Edison because we assumed we’d have to fail 10,000 times to get it to work the 10,001th, and we did. There’s no shortcut to really hard work. In our experience you have to work harder and work smarter than everyone else.”

“We learned so much more from our failures than we did from our successes and our character and our values were hardened by the people who told us over and over there was no way we would succeed. I think that rejection, when you’re doing something you love, is an omen you’re on the right path. And it’s an unbeatable fuel if you choose to use it.”

For more advice from Holmes, you can watch her full address here.