Wheelys Is Harnessing Crowdfunding to Create a Global, Mobile Cafe

What better way to disrupt the café than by putting it on wheels?

Wheelys is a project by the Nordic Society for Invention and Discovery (NSID), and it’s not a totally new concept. We’ve all seen some some sort of wheeled street vendors, maybe even some on bikes. But what sets Wheelys apart is that they’re making it so easy and relatively affordable to start your own small business.

All you have to do is buy a Wheelys cart. They send you the coffee supplies you need, and you sell under the Wheelys brand (for a small monthly fee) on a state-of-the-art bike that can be stored away when you’re off the clock. They claim you can earn up to $700 in one day.

The high-end version of the cart itself is as high tech as you can get while still keeping things eco-friendly. The branding is stunning and how much you make is completely self-motivated, making it a pretty easy sell for anyone looking to make some extra cash or start a new venture without all of the startup hassle.

We interviewed Maria De La Croix of Wheelys to learn more about their mission and how they’ve capitalized on their crowdfunding success to disrupt big coffee franchises.

Buying a Starbucks franchise can cost you hundreds of thousands of dollars, and it’s no wonder since people are willing to dish out so much cash for a cup of joe — up to a 300% markup, in fact.

After working with a big brand that sold coffee, NSID looked at the model and thought that they could do things more efficiently without overhead, rent, advertising, and all of the other costs of a brick-and-mortar café.

“So we started to toy with the idea of having a café of our own, combining the profit margin of a global brand with the low overheads of a street business,” De La Croix said. All while making their coffee even better.

“We did extensive testing, building, and branding of the bikes in order to finally see an increase of the revenue by more than 50%,” she explained. Then they launched Wheelys to the crowdfunding masses, twice.

(Read about other innovative, crowdfunded products in our Startup Stories series: QCut jeans come in 400 sizes to help women find the perfect fit, and this spray can help you sleep.) 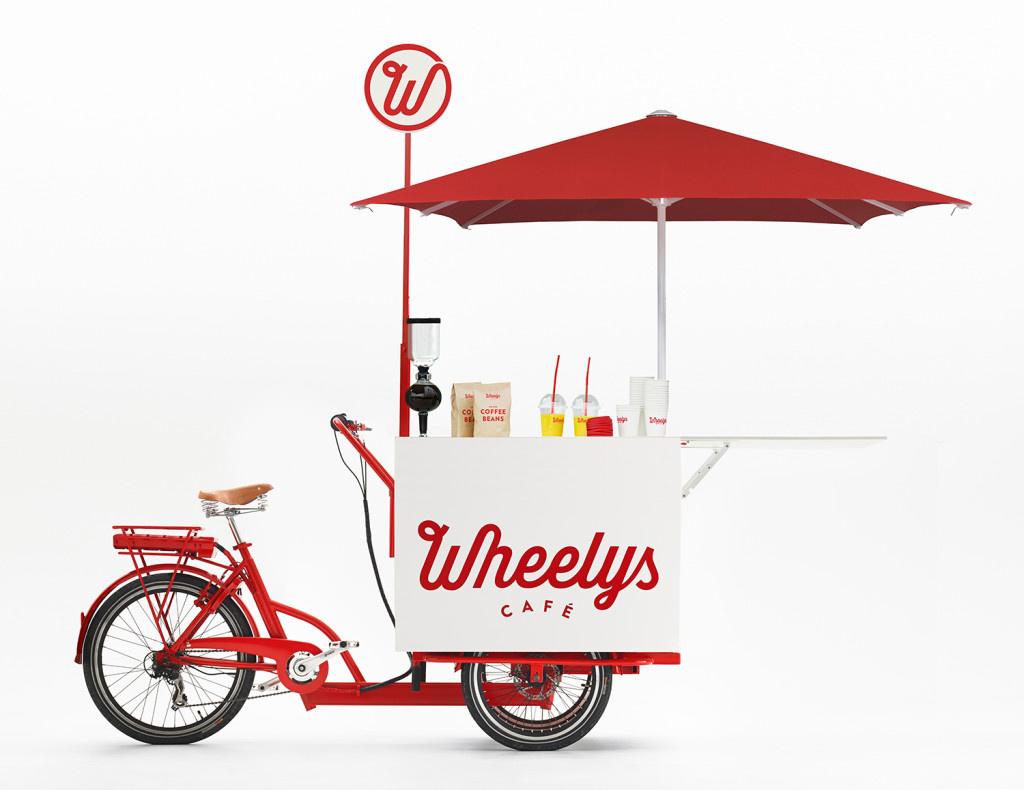 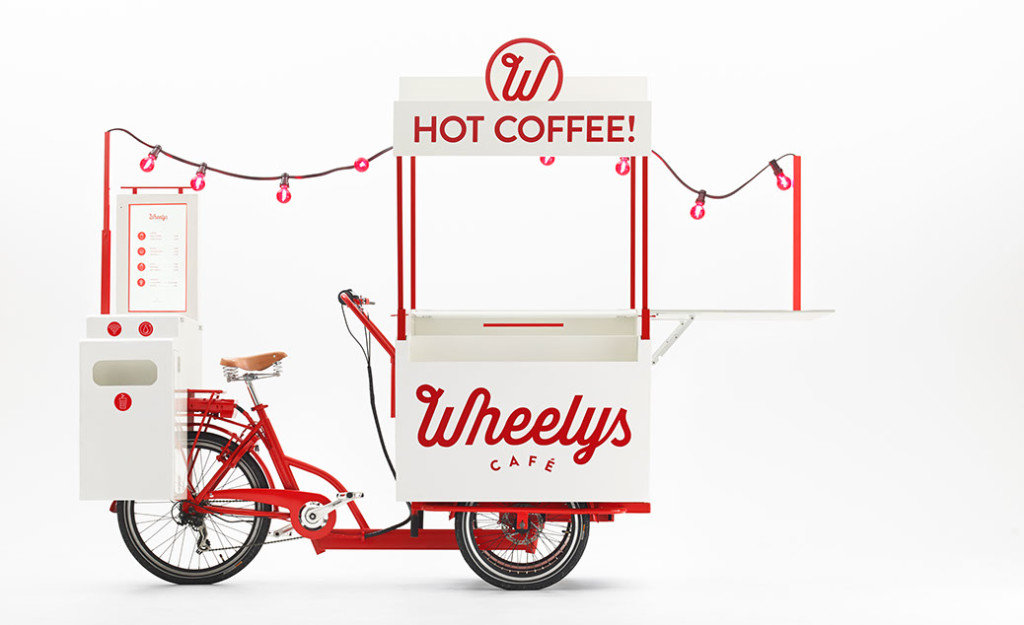 A comparison of the original Wheelys cart (top) and version 2.o (bottom)

The first Wheelys campaign hit Indiegogo one year ago, and the second went up only months after that.

With the first campaign, De La Croix said, “We got a huge interest, and people from all around the world purchased Wheelys Cafés.” Early bird prices ranged from $1,800 to $2,900 depending on how early you got in on the deal — all 13 of them sold out. It’s no wonder that they tripled their goal, raising almost $60,000.

“We kept getting a lot of requests after the first campaign, and we really like the concept of crowdfunding. It’s very transparent. So we decided to try out a second time.”

As we explain below, their second design, Wheelys 2, wasn’t just a modest upgrade. Their humble flagship cart was decked out for a more high-tech option.

The second campaign ended in June, raising over $100,000 and selling way more Wheelys and Wheelys 2, some of them in fleets. In the first four months of sales, they had 30 mobile cafés in more than 10 countries around the world.

Why’d they pick Indiegogo over Kickstarter? De La Croix said it was simply a matter of logistics.

“To start a Kickstarter, we would have needed to have an American credit card and other things which we at that point [didn’t have]. Indiegogo was simpler for us as Scandinavians in that sense. So we just went for it. Though today, I think it’s time to try out Kickstarter as well!”

De La Croix’s advice for launching a crowdfunding campaign is, “If you do things that people like, they will share and support it. If you have a good idea, don’t hesitate but be brave and put it out there. It might work.”

Wheelys wants to give people a way to make money that’s entrepreneurial, but without all of the bumps and bruises that come with starting a startup. De La Croix said,

“There are 50 million young people without a job in Europe. In countries like Spain, half of the young are out of work. If we can make the tiniest difference here, giving some people a job, then all the work with Wheelys will have paid off.”

That’s only part of their mission, though. The other part is to keep things super eco-friendly and delicious. With the Wheelys 2, the bike is electric and can get enough solar power to run the lights and the charger. There’s even a gray water tank for you to use on plants rather than just discarding it.

It seems they’ve really thought of everything when it comes to making the bike as self-sustaining as possible so you get the most value for your initial investment.

Only nine months after the first Wheelys hit the road, the team felt they had enough research and feedback to fine tune their concept and design to create Wheelys 2.

De La Croix said, “The biggest innovation in Wheelys 2 is not the thing in itself, but the combination of how we’ve put things together and use them. We’ve been able to combine solar panels with a cooling system, water, disposals, stoves and displays. It’s a swiss army knife of the bike café so to say: there were scissors and knives before, but not in this combination.”

The 2 isn’t a replacement for the flagship Wheelys; it’s just a more souped up version and De La Croix said they’re always looking for improvements to both bikes.

In addition to adding more features to the cafés, they had the help of some of Sweden’s best designers to update the visual branding of the bike to make things look a little less vintage and a little more modern. “We wanted it to feel very fresh, simple, and nice as well as easy to recognize a Wheelys,” De La Croix said. 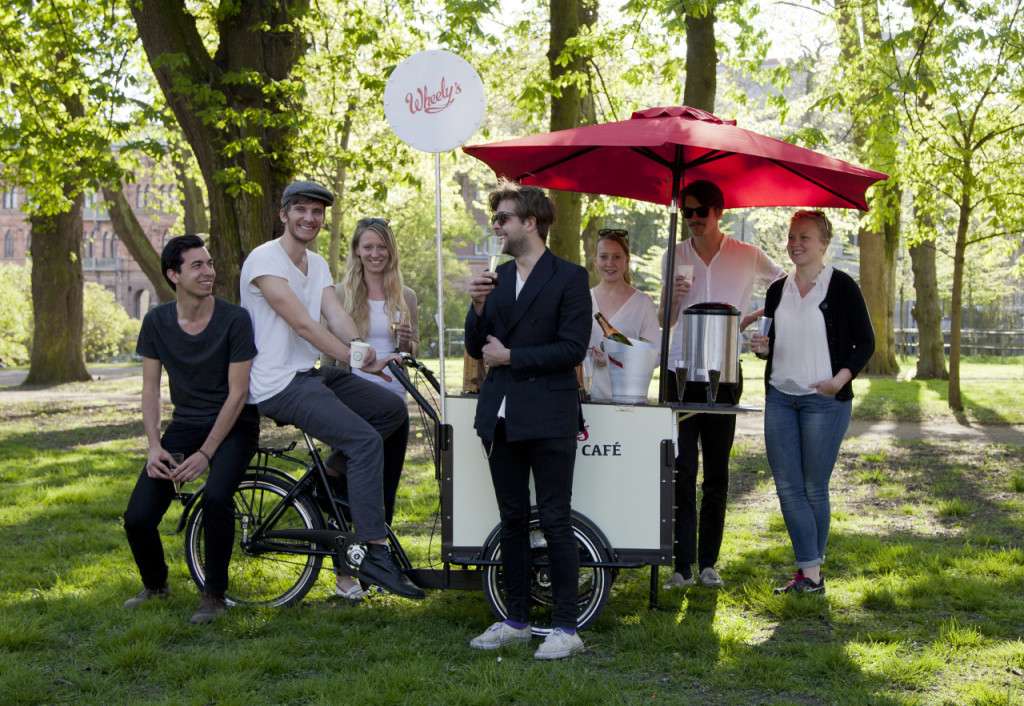 To buy your way into the worldwide Wheelys fleet right now via Indeigogo, prices start at $2,100 for the Wheelys 1 and $7,000 for the Wheelys 2 — including a lifetime of franchising fees valued at $5,000. (After the campaign, that fee is $150/month.)

“It’s still quite expensive, we aim to lower it. Starting a Wheelys shouldn’t be about big expenses, but in general we’ve been able to push the prices down a bit since we’ve had more orders than we had in the beginning,” De La Croix said.

Once someone buys a Wheelys, what’s keeping them tied to the branding and the mission? “We have daily contacts with our Wheelys operators. We talk on Skype and have a community where it’s possible [for them] to discuss things with us and other operators,” De La Croix said. “I guess we’ve also been lucky to attract such great people to our business. They are taking great care of the brand and are working hard to improve even our standards.”

Wheelys is an open company where people are free to use branding assets for ads and marketing to boost their business, which means they must put even more trust in their Wheelers.

Right now, the country with the most Wheelys on the road is Jordan, but with the current bike orders in production, it’s soon to be the US.

No matter where the cafés are, De La Croix said that people are ambitious in trying out new ideas to make their business better. She said, “I know some Wheelers are aiming to sell coffee at the airports at the moment, which is a quite smart idea since everything in the airports is usually quite expensive and boring. [M]ost people will be happy to see a Wheelys rolling the corridors of the airport. We’ve tried the library once — that was appreciated but a bit too cramped.” 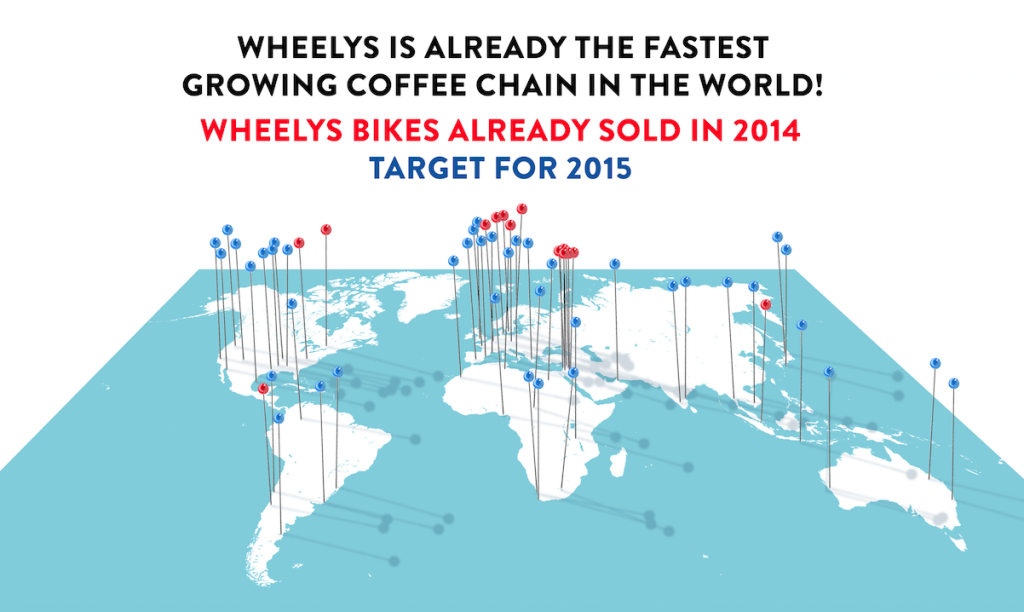 Seeing as it’s only been a year since Wheelys launched, and they’re already a global, mobile café with two impressive models to their name, it looks like they don’t plan on slowing down anytime soon.

De La Croix said that they’re still searching for potential improvements to make to the bikes while continuing to build the brand. Another big milestone they want to reach is to source coffee from their own roaster.

But the biggest thing they’re working on right now is the Wheelys app, which De La Croix says they plan to launch in San Francisco soon. They believe “it will be smashing,” and based on their success so far, we suspect they just might be right.

Versame Is Creating the First Wearable Education Device for Children