This is part of a series on machine intelligence companies. We’ve interviewed Beagle, Mariana, and Beyond Verbal. Now we’re turning our attention to Preteckt, which is applying machine learning to maintaining trucks and other heavy-duty vehicles.

Few things are more frustrating than a vehicle breakdown. They’re unexpected, impede our ability to go about our lives, and can end up costing more than most of us would like to pay.

And that’s when you only have to worry about one vehicle. Now imagine running a business whose success depends on your ability to keep a whole fleet of them on the road as much as possible.

I’m ripping out my hair just thinking about the stress that kind of position would bring on.

Preteckt is made to help those people keep what’s left of their hair. It gathers vehicle data, predicts when one will be due for maintenance, and passes that info on to businesses.

The idea is that this service will allow trucking and other heavy-duty vehicle companies to keep their vehicles in good working condition so they don’t lose time and money due to a breakdown.

We recently talked to the company’s chief operating officer, Sasha Kucharczyk, about how Preteckt is using machine learning to realize its goal of minimizing breakdowns for its business customers.

What’s your role at Preteckt and what does that entail?

As a co-founder and COO, there is no day-to-day job for me.

As COO, I cover all the back-end business work, so a lot of the marketing strategy, finance operations, etc. The type of work that might involve Excel is usually the stuff that I end up doing. 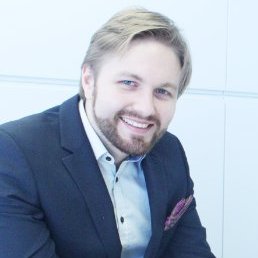 How did you end up joining the founding team?

I went through a transition while working on my MBA. When I started, I thought I’d be some corporate jock. But then I realized that corporate life wasn’t for me.

In startups, everything’s much more unstructured; you can be a lot more brave in your actions without massive pushback from the corporate hierarchy. So in the second year of my MBA, I started looking into startup life.

After graduating I transitioned into the biz-dev world, focusing on sales and marketing for an ag-tech startup. During that time, I was talking to someone at a conference who had the initial idea for what would become Preteckt.

We hit it off and decided to turn this idea into a reality. We ended up going full-time about a year ago.

What’s the most challenging aspect of your role at Preteckt?

The problem with having co-founders is that you become friends with them, and it can be hard to be critical of and push friends.

You have to be on each other’s backs but also assist each other where it’s needed. It can be hard to find the balance between business partner and friend.

We also moved the company to another city where none of us really knew anyone else. We had to stay business partners. That actually has the opportunity to really hurt friendships.

It’s a fine balancing act that can be very difficult to manage, yet is very important.

What was the inspiration behind Preteckt? What made you focus on this space?

The initial idea was that getting maintenance for your personal car was a horrible experience. Very commonly you bring your vehicle in at the beginning of the day only to hear, “Great we’ll phone you at noon saying what we think needs to be done.”

They call you at noon, tell you what they think it is, and say they have to order parts. Then a week later you finally get your vehicle back, along with a bunch of unknown charges.

The dealerships aren’t trying to make life difficult — they’re doing what they can with what they have — but on the driver side, there are a lot of unknowns.

We ran into some difficulties, however, in customer discovery. Everyone who owned a car did not like the experience of a breakdown. But the emotional pain that they had related to it varied a lot.

So we went from B2C to B2B and started talking to small vehicle fleets. We received a bit more interest because they cared about the financial cost and tracking it and trying to minimize it.

The issue, though, was that when a taxicab breaks down on the road, it might not be the most expensive incident. It might cost a few hundred dollars, but it might not happen that often.

So someone suggested looking at trucking fleets. If you look at trucks, if it breaks down in the middle of the desert somewhere, the company could be out thousands of dollars. We ended up focusing on that and have been iterating on that space ever since. 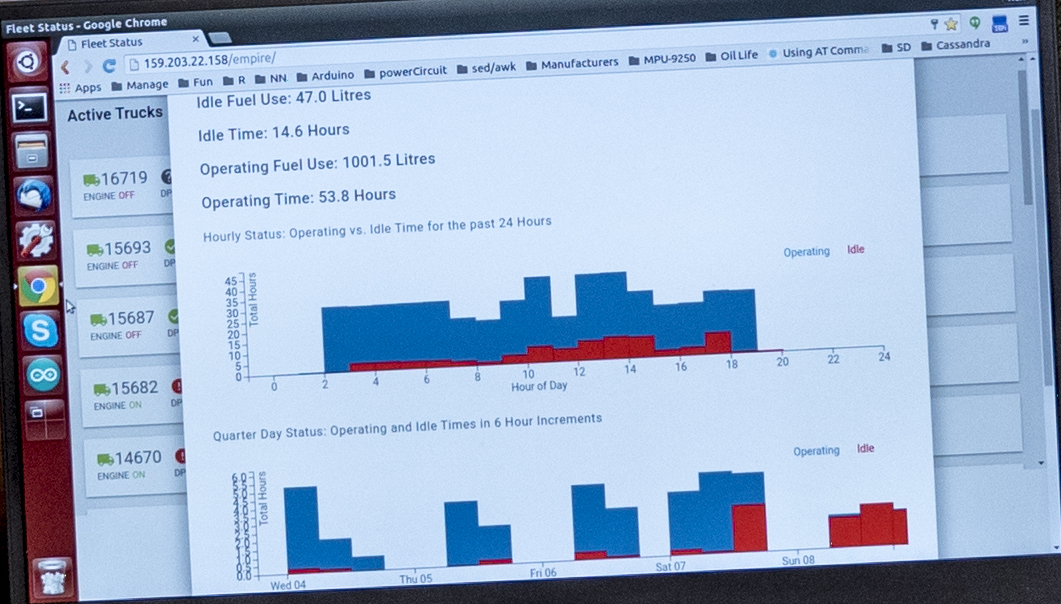 How does Preteckt help drivers or trucking companies?

Our main premise is that if you know something’s going to break down ahead of time and know when, you can factor that into your operation schedules and get maintenance ahead of time.

So they can get the truck in a week before something’s supposed to happen, get the necessary repairs done, and get the truck back on the road without any downtime or associated costs.

Combine that with regularly-scheduled maintenance, and you can kill two birds with one stone.

How have big rig companies responded to Preteckt? Are they excited or cautious?

We are working with five fleets right now that have between 200 and 800 trucks each.

We have another pipeline of about 15,000 to 30,000 trucks interested in us and considering engaging with us. But we haven’t moved forward yet because we’re still in the validation stage with the technology and working on new features, so we can get to the point where it’s scalable.

When you go from a vision that they think is cool to the early stages of what that will look like with the product, it requires quite a lot of innovation to figure out what things matter in the short term.

The question becomes what are the biggest pain points that we can work on solving now to show them and get their interest. 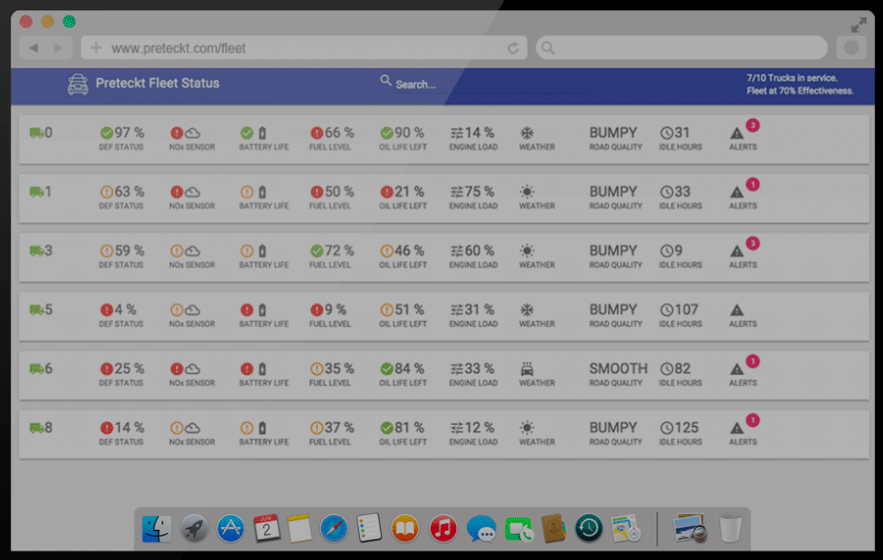 What can we expect from Preteckt in the future?

If I wanted to be extremely grandiose, I would say to make vehicle breakdowns a thing of the past.

A more realistic vision for the next five years is staying in the heavy-duty vehicle space. We’re moving to buses and vocational trucks (garbage trucks, mining trucks, etc.) because they all use the same communication standard, so they’re much easier to develop on.

Once we have that done, we can start thinking about going to other types of vehicles or industries.

What’s the most exciting trend in machine learning from Preteckt’s perspective?

One of the exciting trends we’re looking at is autonomous vehicles.

One of the reasons we’re really excited about that is, to make an autonomous vehicle work, you remove the driver from the vehicle yet you still have to know the health and the current state of the vehicle for maintenance purposes.

For those vehicles to take off, a system similar to what we’re working on today is going to be needed, so these vehicles don’t break down in the middle of the road all the time.

What advances in machine learning have benefitted Preteckt the most?

Here’s something that’s not a super recent development but is an evolving trend: data costs for pure data plans keep going down, which makes gathering lots and lots of data more feasible.

Knowing that you can be collecting a lot more data at much cheaper prices is rather exciting.

Outside of that, I think the fact that a lot of cloud computing servers (AWS, Digital Ocean, etc.) are becoming mainstream, which means your processing power doesn’t need to be local. There are scalable solutions out there for something that used to be extremely costly and extremely time-intensive to build.

I’m assuming in the past you had these big operation problems in terms of having to figure out what you need and how you can build it. Now you can spin out new servers and scale on-demand, which gets rid of that infrastructure cost associated with data work.

Are there any limitations on machine learning Preteckt would like to see removed?

Right now we’re building our own data set to get our own predictions. We’re doing some tests with OEMs to figure out if the data set we’re collecting is unique and if so, how.

If five years of vehicle data on everything happening on a truck’s computers magically appeared in front of us, that would essentially be a godsend. If we had that, it would be like “Oh my god, I just hit the holy grail of data.”

Does Preteckt consider itself a machine learning company?

We actually do. We consider ourselves a machine learning or data science company first, and everything else second.

One of our core assets and core areas we’re building is our data science team. They’re about half the company right now, and they’ll probably stay that way for the next year.

That’s a fundamental area where we can provide unique value propositions based on our ability to understand what’s happening on vehicles and predict what will happen in the future.

To put it another way, we’re a data science company working on heavy-duty vehicles right now.

Do you have any serious competition in this space?

In terms of competition from another startup, I don’t think so. At least not to the same extent that we’re trying to do.

That could be because what we’re doing right now as a data science company is iterating a lot, building our algorithms, improving their accuracy, and making them better.

The first generation will probably be lower accuracy and have room for improvement. And I don’t know if an established brand could release something like that publicly without some backlash.

How do the AI and machine learning efforts from Facebook, Google, etc. affect you?

One way they have provided a huge benefit is that a lot of them have made APIs and things similar to APIs available.

I don’t do too much of the in-depth data science or ML work at the company, but I know that the team is using Cassandra, which is an Apache tool, and what it does is essentially provide a repository of different functions other people have created to make data science and machine learning with Apache much easier.

Google has released a whole repository of stuff for people to access. Microsoft has too. IBM has stuff out there as well.

All of that makes coding and development much easier. If you know what you’re doing, you can start plugging different things in and seeing what happens instead of having to code your own result.

When I was working on my Masters of Engineering, I actually did my own AI work. I remember having to code a lot of the basic machine learning algorithms from the ground up.

Now you can just drop-and-use a lot of these things, which lets development happen much faster and just makes life much easier.