Fans of 90s chat rooms rejoice! Last week Facebook launched a forum app called Rooms. Not to be confused with the cinematic masterpiece The Room, Rooms helps you create tiny message boards to talk about whatever you want in the form of text, photos, and videos. Users can use different pseudonyms for every room that they join like in the days of Aol Messenger.

If it sounds like they’re not doing anything new, it’s because they aren’t. The goal is to return to a pre-Facebook time when it was easier for people to connect with strangers anonymously. It’s a reinvention rather than an innovation.

It seems that Facebook is taking inspiration from apps like Whisper, Secret, and YikYak that lets people vent without consequences. But Rooms aims to stand out of those listed by being more thorough with their content moderation. What makes the new app appealing is its return to true anonymity. You don’t even need to be on Facebook to log into the app. And there are no ads (for now).

Josh Miller, product manager for Facebook Rooms, told Wired that “Rooms is a space for people to talk about their interests without having to be anxious that it could be connected to their real identities.” 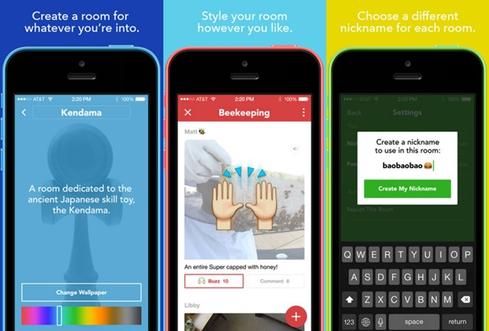 So Rooms is closer to what would happen if Aol Messenger and Secret had a baby. It addresses the concerns of users who don’t want to be fired for things they post on social media.

The million dollar question: How can you leverage this new tool for your business?

1. Start conversations. If you’re an event planning startup, create a room bemoaning the popularity of photo booths at events. Give helpful tips on how to not run out of beer at events. The format is different, but the approach is the same–sound like a human being. This isn’t the place where you give your sales pitch. You’ll be the lone user in your room if you do that. Just start conversations relating to your industry and you’ll find yourself with intimate access to your target users. The goal here is to build relationships with potential and existing consumers, even if their pseudonym is DarkLord99.

2. Join conversations. Being a joiner isn’t always a bad thing. You can use Rooms as a way to digitally put your ear to the ground and find out the needs and desires of your target consumer. Since, compared to other social tools, the forums are more unconstrained, you’ll get unfiltered viewpoints on your industry. These conversations could help you stumble upon problems that you didn’t even know existed. Many times the best products and services provide solutions to people’s grievances.

3. Take risks. If your brand identity is in crisis, Rooms might be a great place to reinvent the company. The app encourages creative expression, so be creative. This is another way listening comes in handy. Use the chat rooms to adopt the language of your target audience and get to know their likes and dislikes. Before you know it, your brand identity will be more in tune with consumers. And because the app is in its infancy, it’ll be easier for you to take risks than with more established platforms, like Twitter.

Have you used Rooms? Tell us your experience in the comments.