There are convenient ways to get food, booze, and pretty much anything else delivered to yourself. But what about delivering gifts to other people?

In early fall of last year, Sid Viswanathan and Samir Shah quit their jobs to pursue a startup business venture, though at the time they didn’t know quite what it was. They made it their full-time job to decide which problem they wanted to solve and what they came up with was gifting.

Shah said they wanted to “bridge the digital aspect of gifting with the physical aspects that feel a little bit more thoughtful.” The result is Sweetness, which launched two weeks ago.

With Sweetness, you simply choose a baked good from a local bakery and then choose who you want to send it to (right now they’re only delivering in San Francisco). Then you record a personal video message instead of sending a card and Sweetness takes care of the rest, all for $20. Your recipient will get their hand-delivered, specially-wrapped baked good and a link to your video message at the same time.

It’s Viswanathan and Shah’s solution to making gifting more thoughtful. They talked to me about their first two weeks since launching Sweetness and their plans for the future of the app. 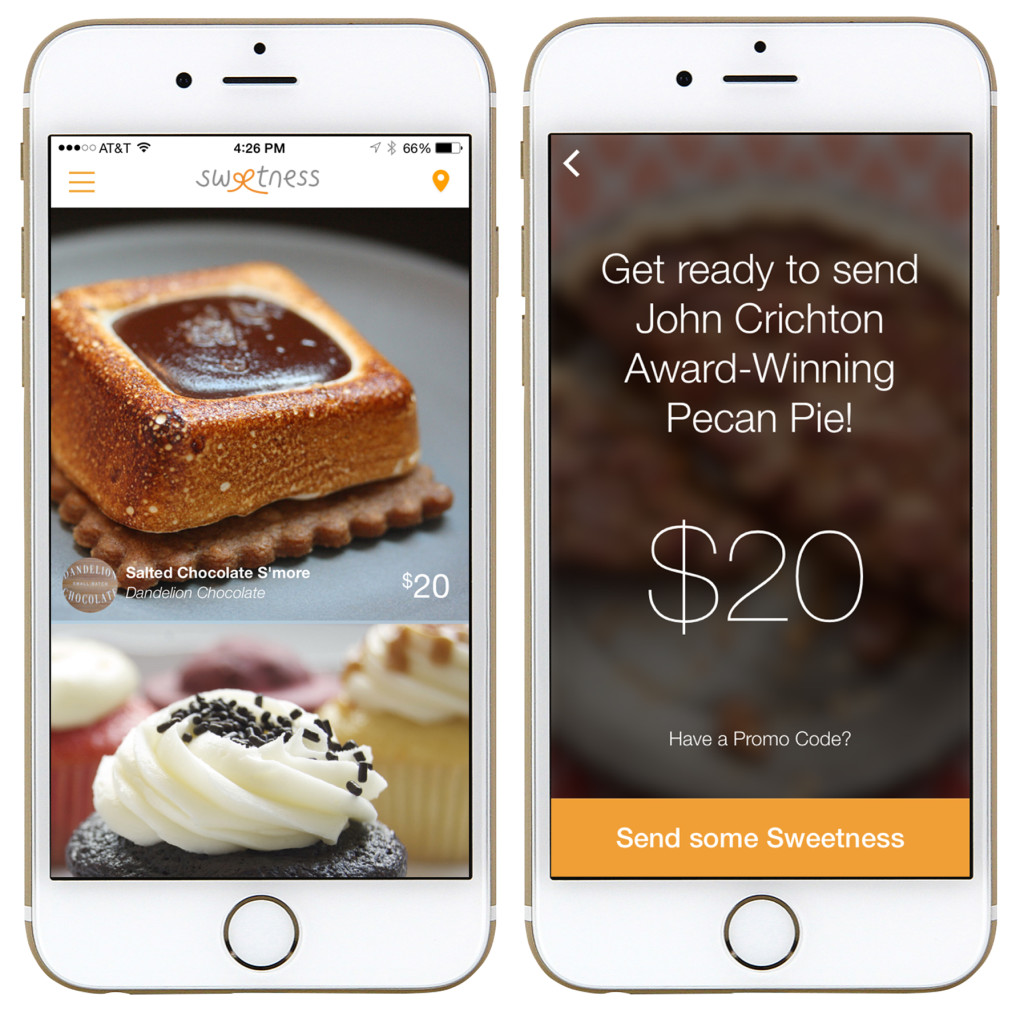 Viswanathan and Shah have known each other since they were undergrads at Carnegie Mellon University. When they decided to leave their jobs as a Management Consultant (Shah) and Product Manager for LinkedIn (Viswanathan), they didn’t do it in the most “ideal” way.

Viswanathan said that usually the ideal way to leave your job for a startup is to have the idea, team, and even the investors lined up. But, “in reality, that wasn’t the case for us,” he explained. “We sort of said, ‘Now is the time to solve something. Now is the time to go back to the drawing board and figure out some things we want to work on together.'”

As anyone who’s sat down to a blank slate knows, the blankness of it can be freeing, but also kind of intimidating. Viswanathan and Shah would sit in a room everyday and just come up with ideas — some good, some bad.

“It’s actually kind of scary because we [were] looking at ideas in all sorts of spaces that we knew nothing about until we narrowed in on the concept of Sweetness,” said Viswanathan.

Sweetness was the idea that made them the most excited. Viswanathan said that when you find that idea that continues to make you excited, “that’s [the] momentum you’ll need to carry it through to launch.”

They knew that their mission was gifting and delighting people. With that as their focus, they pushed through to build the app themselves (being engineers came in handy) and launch in San Francisco as quickly as possible.

A New Age of Gifting

A few years ago, Eat24 seemed like such a novel idea, but now delivery apps are getting more and more specialized and convenient with rideshare services even getting in on the action.

So why does the world need another on-demand delivery app? It doesn’t. But it does need a gifting one.

Viswanathan broke down the current gifting process like this: You buy a gift, get a card, package it, figure out how to send it, then send it. He said that’s “the ideal state of gifting in the physical world.”

By focusing on reinventing this gifting process in a way that’s not only more convenient but just as (if not more) personal, Sweetness is offering a truly unique experience that’s driven by an app, but carried out in real life. Viswanathan said,

“I think while the other apps are focused on on-demand consumption being for yourself, really everything that you’ll see in our product … is geared around the mission of being thoughtful and how [you can] help someone else by just being thoughtful through an app.”

While they built the app with one-to-one gifting in mind, since it’s been in the hands of users, they’ve seen a lot of use cases for one-to-many gifting, such as sending a gift to both a husband and wife or a CEO sending gifts to all of his or her engineers.

Shah said at this stage, they’re really focusing on listening to their users:

“There are all these interesting use cases that customers are presenting to us, so really the sky’s the limit … It’s really a question of how do you prioritize all these different ideas, and really hone in on the section that we want to go after and really perfect?” 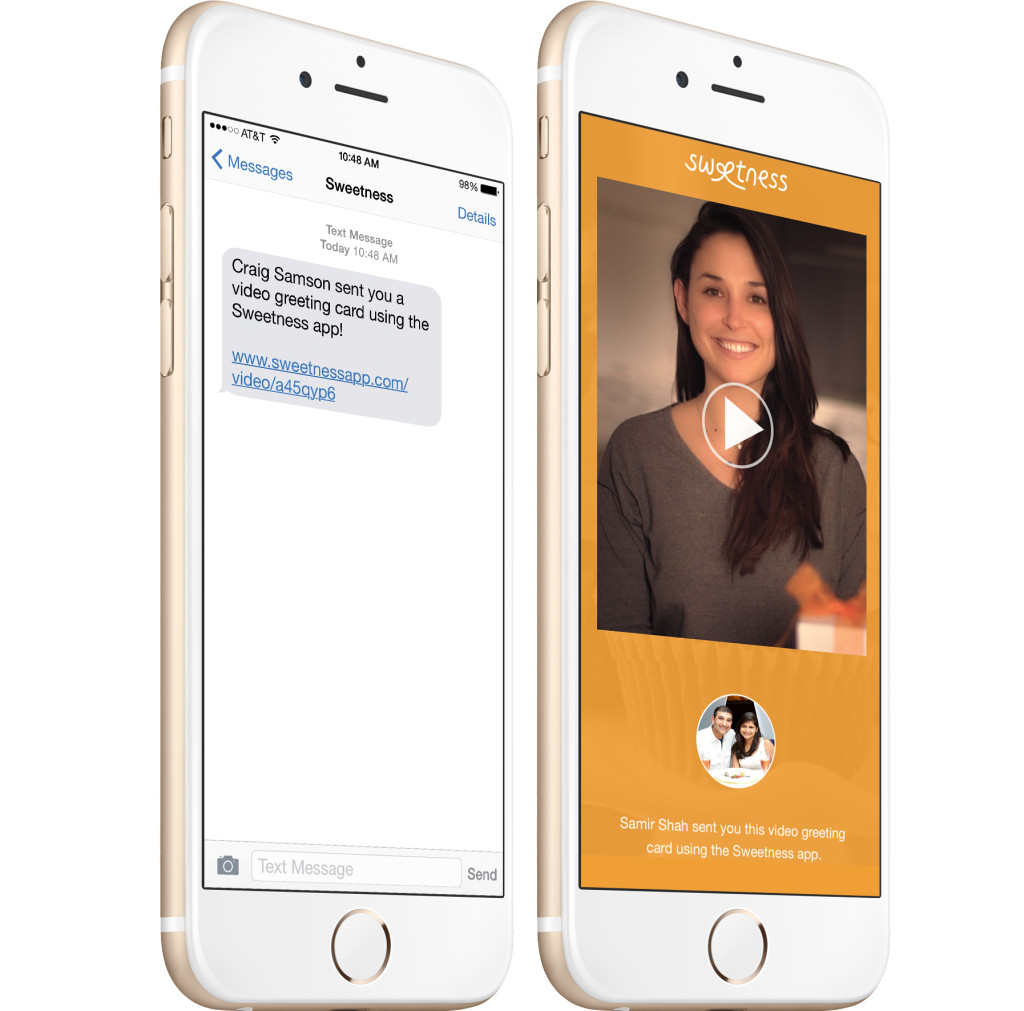 Keeping It Seamless and Selfless

It was not only important to make the Sweetness app experience seamless for both the sender and the recipient, but also to ensure it felt thoughtful and personal, no matter the distance between them.

“What’s really interesting is when you’re separated by timezones, a lot of the time it’s really hard to just hop on the phone and just have a good conversation, said Shah. “So what’s interesting about our mobile experience is you can kind of do it through the video messages.”

Without being bound by time or location, Sweetness allows for that surprise factor you get from receiving a package in the mail, except with a more guided, crafted experience, which makes it all the more memorable.

Viswanathan said to make a “frictionless app experience” for the sender and a perfectly-timed execution for the recipient, they first went about testing their concept with friends by simply having them fill out a Google Form with their recipient’s information and then upload their video message.

He said that not only were people really happy with the experience (because who doesn’t love getting cupcakes, right?) but, it also motivated people to connect.

Viswanathan explained, “That’s really powerful to us from a gift-giving standpoint because … you pick up the phone right away and you call the sender saying, ‘This is amazing. I really loved it. I thought this was really thoughtful.'” For $20, you make someone’s day.

For the sender, the entire process from payment to video message is all done within the app, but the recipient doesn’t need to download the app to get the full experience. Sweetness will coordinate with the recipient via SMS to establish a time and place that he or she will be available without giving away the specifics of the gift.

The company knows when you receive the delivery, and that’s when you’ll receive an SMS link to the video. Timing is key. “We didn’t want [that] to feel disjointed at all,” said Shah.

The price right now is based on product, delivery, and packaging. Shah said, “Comparable gifting experiences out there are really expensive and we wanted it to be at a price point that was almost a no-brainer for someone.”

Of course, as new products are added and new cities are opened up, the price point may see some adjustments. 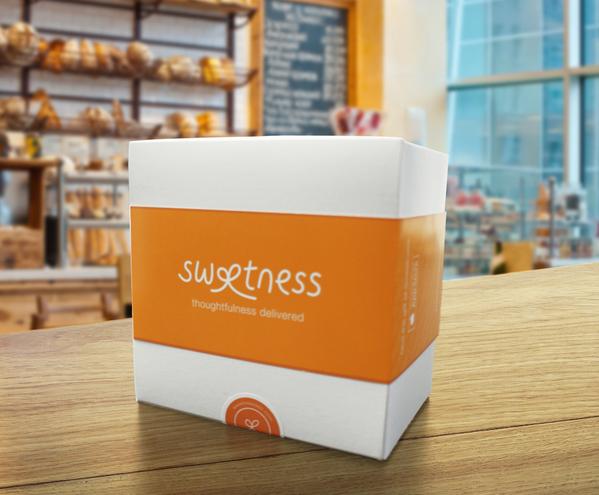 While gifting is the primary focus of Sweetness, keeping the gifts “homegrown” is also really important to their mission. Viswanathan and Shah are starting with baked goods from three of San Francisco’s best bakeries not only because they’re delicious, but because they’re local and more gender-neutral than gifts like flowers.

And then there’s the fact that they’re being hand-delivered, rather than just tossed on someone’s porch. Viswanathan said, “It’s all about hand-delivered gifts, and that is really what allows us to have that personal touch.” It’s “almost like [the delivery person] is an extension of you, yourself.”

Sweetness may not always deliver baked goods exclusively, but Viswanathan said, “We want to make sure that whatever products we think about expanding to in the future, we still continue to hand deliver them and make sure we have that personal touch when we hand it off.”

For now, Sweetness is using delivery providers and other logistics companies to make deliveries, and sometimes Viswanathan and Shah even make deliveries themselves. But in the future, they’d like to hire their own delivery team.

With only four months from concept to launch, Viswanathan said, “We just had to get it out the door as quickly as possible.” Now that they’ve launched, they can see where and how they should start to grow first.

Even with their deliveries being focused just in San Francisco for now, they’ve seen some really touching use cases that make it easy to see the impact of a service like this expanding across the country. For example, someone in a long-distance relationship sent their significant other their favorite dessert on their anniversary. And all the way from Asia, a brother in Shanghai sent a gift to his sister. 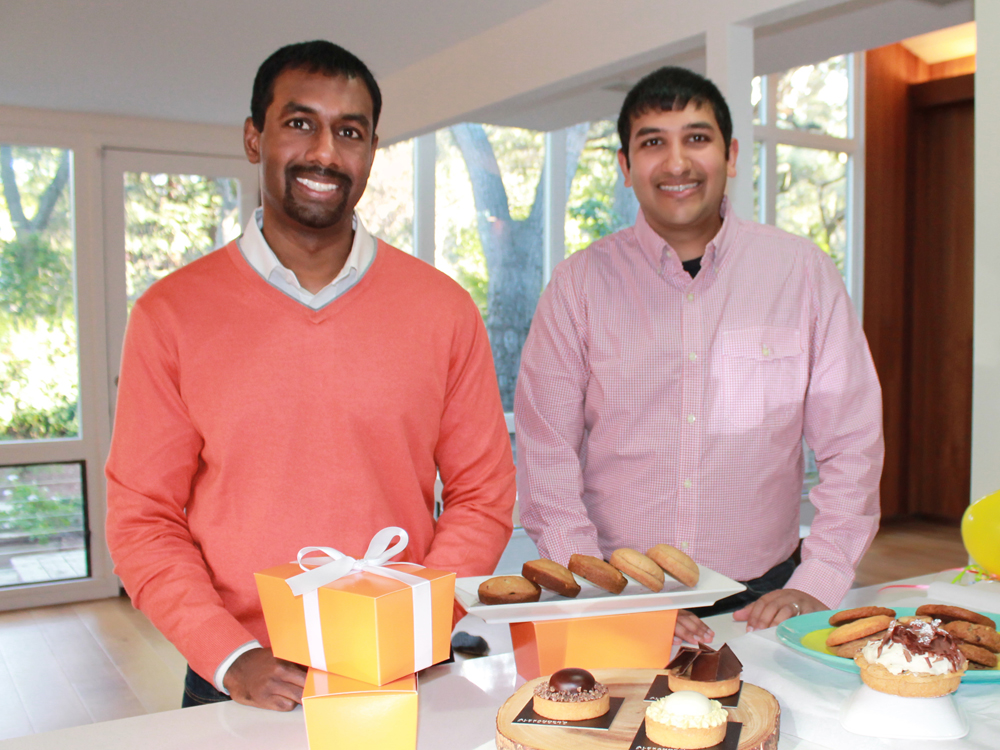 What’s Next for Sweetness?

So far, Sweetness has received a warm reception on Product Hunt, and they have a lot planned to keep up their momentum, including expanding their delivery range and launching on Android.

“It’s getting to the point where we can prove that San Francisco works,” said Viswanathan. “We’re at the stage right now where we’re pre-funded and so we’re just making sure we really understand what the use cases are and really dial in on those during this time.”

In the future, they want to evaluate what they learn in San Francisco, then decide which parts of that they can replicate in other cities and how logistics will change with each new area. They’re also hoping to release an Android version within the next year.

Looking more long-term, they’re excited by the potential of adding their own delivery team and introducing possible features like having the delivery person sing “Happy Birthday” or taking pictures of the recipient and sending them back to the sender.

But Shah said they’re handling their growth step-by-step: “The nature of startups is that you’re trying to figure it out pretty much every single day or every week. I would say that the short-term goal right now is we’re just 100%-focused on driving demand and awareness about the app.”

Ultimately, however they continue to grow, Viswanathan said, “There’s just a a lot of fun things that we want to do to make that whole gifting experience really, really shine.”

You can download Sweetness on iOS right now for free.

Preparing for Growth After Launching and Finding Product Market Fit