Startup Trends: How to Ensure Your Company Outlives the Buzz

Founders naturally want to capitalize on the extra momentum startup trends can provide. But we all know eventually the trend will end. So how do you make sure your company outlasts the buzz?

There’s nothing like Black Friday (or even Prime Day) to make you abandon all of your morals and standards because you want to buy all the things. But don’t feel too bad because retail marketing is designed to convince you that you really do need that high tech, electronic pepper grinder. And why not at such a great price?

As a Senior Executive at Walmart for 10 years, Andy Ruben is well-versed on the deceitful ways of retail therapy. On Black Friday of 2012, he and ecological activist Adam Werbach (former CEO and Head of Sustainability at Saatchi & Saatchi) launched Yerdle as a way to promote #reuse and shake up our relationship with our precious stuff.

The concept of Yerdle is really straightforward. Everything you buy/sell is free with the exception of shipping costs. To give something away (tools, appliances, books, clothes, etc), you post a picture of the item and give it a price in Yerdle dollars. When someone “buys” that item, you get those Yerdle dollars to use on anything in the app. The more you give, the more you can get.

Yerdle is all about #reuse, one of today’s most popular startup trends, and we talked to Ruben about how his team plans to outlast the trend and create a whole new lifestyle for their users. 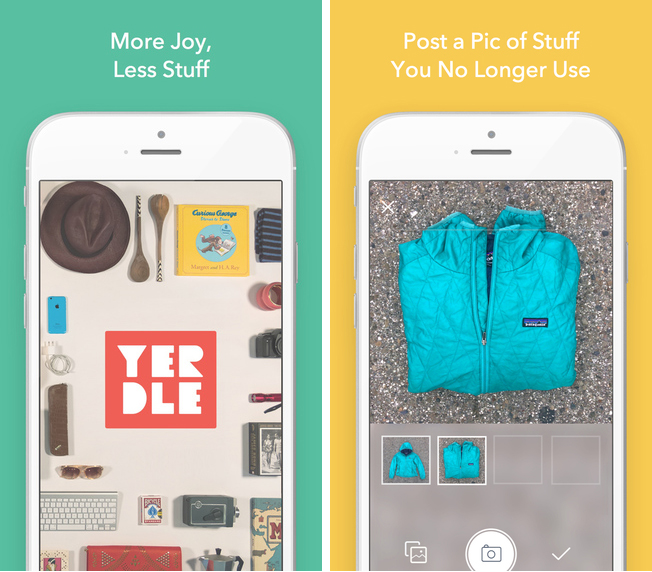 Look for Startup Trends, But Don’t Live by Them

From the hit song “Thrift Shop,” to Marie Kondo’s best-selling book “The Life-Changing Art of Tidying Up,” it seems that getting rid of what you don’t need and buying items secondhand is not only an easier, cheaper way to live — it’s fashionable.

Ruben attributes the macro trend of reuse to many factors: sustainability, affordability, and accessibility.

So was Yerdle born out of this macro trend or was it one of the movement’s pioneers? Given the timing of their launch, it seems to be the latter. But Ruben isn’t tooting his own horn.

“I think it’s really hard to separate any small thing in the market and what it contributed to a trend versus a part of it. I think they’re always intimately tied.”

Ruben said that most companies are created from the opportunity of larger trends. But, to avoid getting too caught up in distractions, he offers this advice:

“Focus on serving people — at first more than the business model, and certainly more than vanity metrics.”

Ruben said you have to first realize that companies don’t make trends. They’re created to fulfill a niche within them. But at some point, you have to look beyond that niche.

To prove their value, Yerdle is not just changing how people get rid of the stuff they don’t want— they’re changing how to get the stuff we do want. When you pay $6 for a barely used coffee machine, it’ll be hard to go back to Target or Amazon Prime. And that’s a change that sticks. 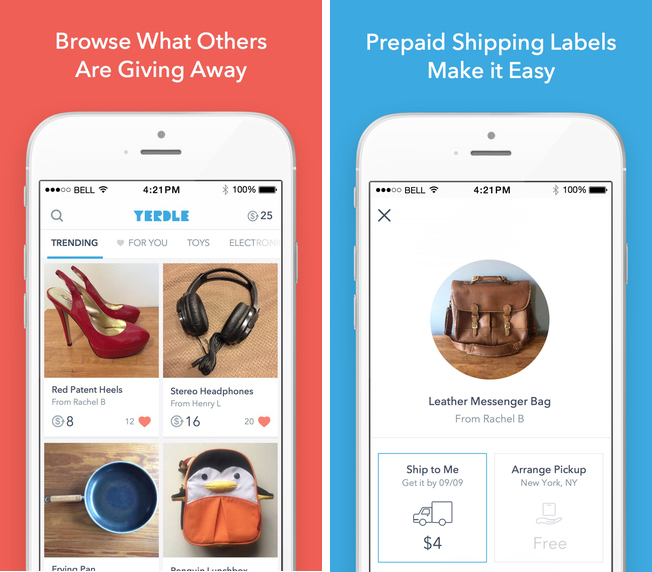 Make It Easy for Your Users

Posting on Yerdle takes a minute or less, and they plan to make it even easier. Ruben said, “We’re going to get to the point where all you have to do is take pictures of things you aren’t using, and put them on the app.”

But no matter how easy it is to post, many people just aren’t in to secondhand stuff. To convince those folks, Ruben said that name brands are a major driving force, and so is our reliance on storage units.

Self storage is up 1000% in the last 20 years. Let’s say your kid has a Patagonia jacket. They will probably outgrow that jacket while it’s in storage (taking up space) all summer.

So Yerdle gives someone else that jacket while giving you more space in your house, and in exchange, you get Yerdle dollars to spend on something else you may need.

Ruben said, “Twenty-five percent of the things that we ultimately get or need can be found from existing closets and garages as opposed to retail shelves.”

Even if you’re adverse to secondhand goods, it’s hard to ignore free money, and before you know it, you’re hooked. Creating a win-win for your users is a win-win for you. It’ll lead to more users who stick around longer. 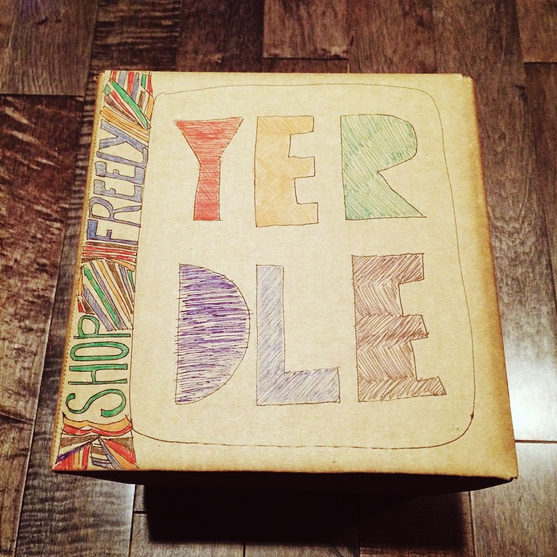 Listen to What Your Users are Saying and Doing

When they first started out as web-only, Yerdle users were very concerned with trust. They seemed to want to give/get only within their network of Facebook friends and friends of friends.

Ruben and his team had a theory, though, that maybe people just wanted what they were looking for, no matter who it was from. They tried expanding the users’ networks to everyone using the app, and it paid off.

Yerdle’s popular #Unshopping campaign came directly from one of their users. For one year, a women ditched retail stores and only Yerdled for the stuff she needed (with the exception of things like food, soap, etc.)

This inspired a monthly, company-promoted #Unshopping campaign, urging people to shop Yerdle-only for one month. By doing this, Yerdle took a movement that they saw happening in their community and shined a spotlight on it, bringing in even more users.

One of the app’s most unique features is one that users didn’t even ask for. Fifty percent of new items we get go unused for the first 12 months and David Merkoski, Head of UX, noticed that this was also true for the items people got on Yerdle.

He found that users were re-posting items that they’d gotten on Yerdle but were no longer using and to do this, they had to create a whole new post for the item. In an effort to simplify that process and extend the Yerdle ethos, they created the “Make A Wish” feature which lets you re-post an item with one tap. 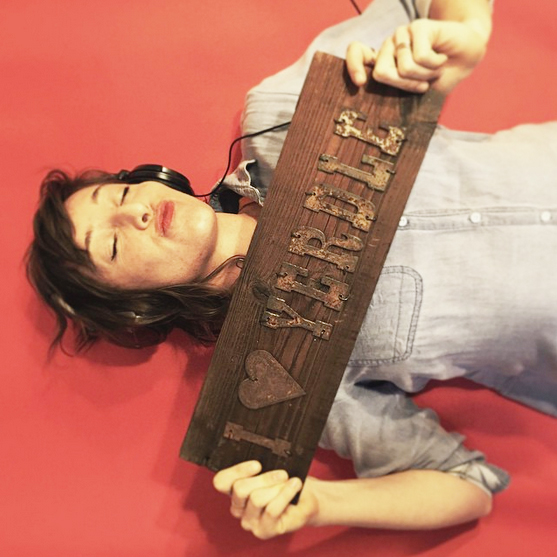 It may seem obvious, but the best way to create a continued, lasting impression on your users’ lives is to keep them coming back. For Yerdle, their Make a Wish feature was a big part of that.

With this feature, items never truly go away — they’re either marked as “available” or “in use.” If someone “purchases” your kid’s Patagonia jacket, it’s then marked as “in use” until the buyer decides to repost it. While an item is in use, anyone can tap “Make a Wish” to be notified when it (or something similar) becomes available.

This means that items are always in play, and user engagement doesn’t end with the sale of an item. Right now, there are half a million items (both available and in use) on Yerdle, and by the end of next year, they predict that they’ll have more items than Walmart.com.

Ruben said that this cyclical process “allows us to move into an economy of moving items between us as opposed to continuing to buy them new and … putting them on a shelf … never using them again.”

Instead of just replacing retail, Yerdle is creating a community that’s becoming a part of it, and encouraging a philosophy that’s not only benefiting their business, but supporting the sustainable movement.

When you make a deep-rooted, permanent change in people’s way of life, you can survive a startup trend. 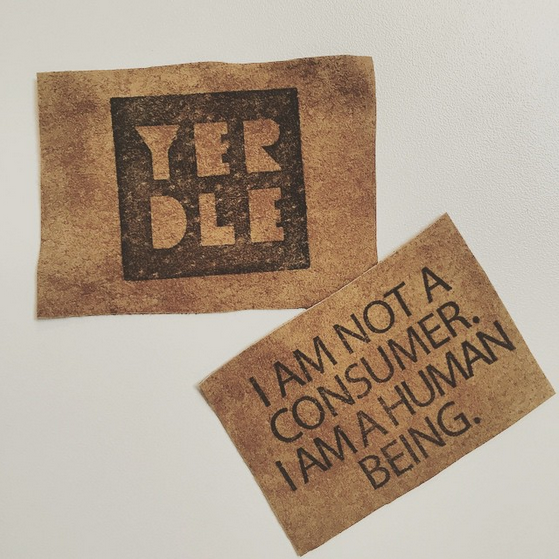 Run Your Office the Way You Run Your Brand

Yerdle’s startup philosophy is not unlike their retail philosophy of getting only what you need and passing on what you don’t. They scale only when absolutely necessary and don’t “overbuild for things that haven’t become problems yet.”

“It’s actually a great way to build a company,” Ruben said. You put a temporary patch on a problem until you determine it warrants the time and focus to create a long-term solution. That way, “You don’t fix the things that never become problems,” he explained.

They take the same minimal approach to hiring. “If you don’t fight every hire, you can risk not building a business in the right way.” As their needs have changed, they’ve gone from many employees who were generalists to ones who are experts in focused areas. You need the people who are right for the stage that you’re in.

“A growing company is a different company every 3-6 months,” Ruben said. In each of these stages, you’ll have a whole new set of problems. So you can’t hold onto any of them, but instead you have to become an expert in solving them and then letting them go.

As an entrepreneur, are there startup trends you’ve spotted and want to capitalize on? How can you incorporate or adapt Yerdle’s approach to help you make the most of the trend while also positioning you to outlive it?