ThinkApps is partnering with Branch Metrics on an in-depth series on deep linking. In this second post, we explore how deep links are integrated into various types of apps and how you might incorporate them into your own.

In the first post of the series, we explained the basics of deep linking. As a review, a deep link is a hyperlink that takes you directly to a specific section of a website or mobile app rather than a generic homepage.

Deep linking has been a standard practice on the web for years but has only recently been made possible on mobile by companies like Branch Metrics.

Deep linking is increasingly becoming less of a bonus feature and more of a necessity for increased retention, high install rates, and word-of-mouth engagement.

Whether a link is pointing to your app, a specific piece of content, or a special offer, when users are on mobile, you have less time to get to the point. Deep links make your user journey fast and personal. But where do you start?

Branch Metrics talked us through some of the most common types of apps using deep links.

Note: Some of the examples below are mockups on apps not currently using deep links. But, if you want to learn more about who has implemented deep linking, Branch’s partners page lists many of the apps using their deep links by vertical.

When a user invites someone to try a new app, it’s only polite to avoid putting the new user to work after they accept the invitation. Otherwise, it’s like inviting someone to a party and making them set out the hors d’oeuvre once they arrive — kind of takes the fun out of it.

Even with word-of-mouth (or link) invites, it’s hard to convince people to install another chat, payment, etc. app on their phone. So you want to make it as easy as possible. 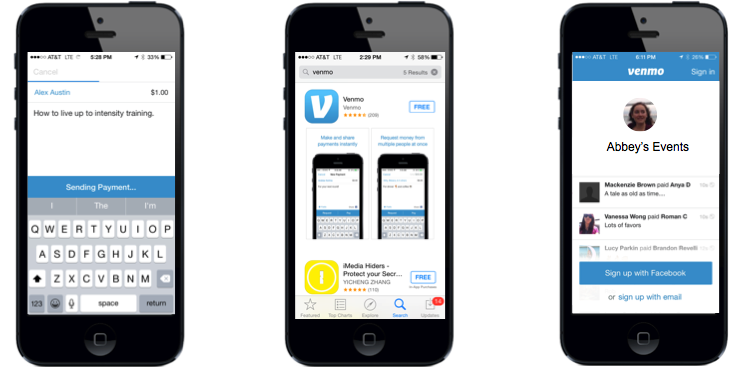 This app lets you pay anyone in your contact list via SMS. With deep linking, when a user pays someone who doesn’t have the app, the non-user would be prompted to download Venmo. Then right away they’d receive their money.

Without the app, a non-user would have to figure out how to start a new transaction and the initial user’s efforts would have been a waste.

WhatsApp takes you right from invite to chat.

If WhatsApp took advantage of deep links, a non-user could go straight from the invitation to the specific conversation thread that they were invited to.

They wouldn’t have to search for users or learn a new interface. Instead they would be dropped right into the meat of the app with fluid UX, making them instantly wonder what their life was like before it.

We all have those apps on our phones that we thought would be a saving grace.

But we rarely end up downloading new apps, and when we do, we don’t always get past the sign-in page. Utility apps that simplify your life need to be simple from the start, and deep links are the way to do that.

Uber’s split fare function would be more useful if users could split fares with folks who haven’t yet signed up for the service.

With deep links, users could invite non-users to split a fare. Once a user clicks on a fare-split invitation, they would download the Uber app, register a user profile, and then instantly join their friend’s fare. 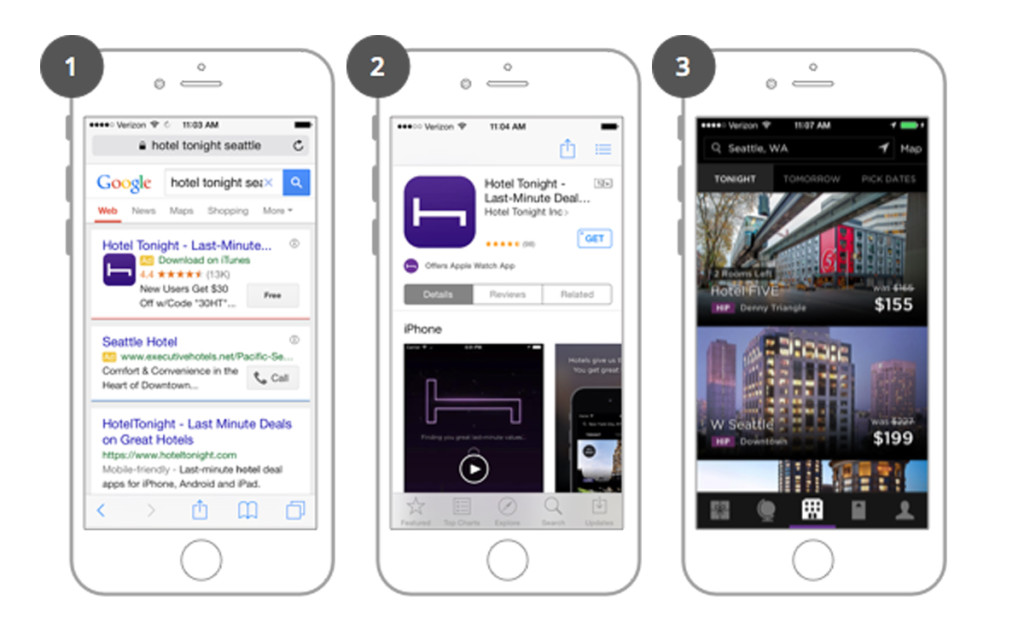 Hotel Tonight picks up where you left off.

If a user is searching for “LA hotels” and clicks on a deep-linked search ad from Hotel Tonight, they’ll be prompted to download the app. Once inside, they’ll see listings from LA (or whatever city they searched), instead of a generic landing page.

According to Branch, with a deep-linked search ad, Hotel Tonight sees an 18% increase in their install to booking rate — all because they saved their user one step.

In the realm of online shopping, cross-app promotion is a great way to get the word out about your app. Until mobile pay gets easier, the more apps can do to make users’ experiences more fluid, the better. 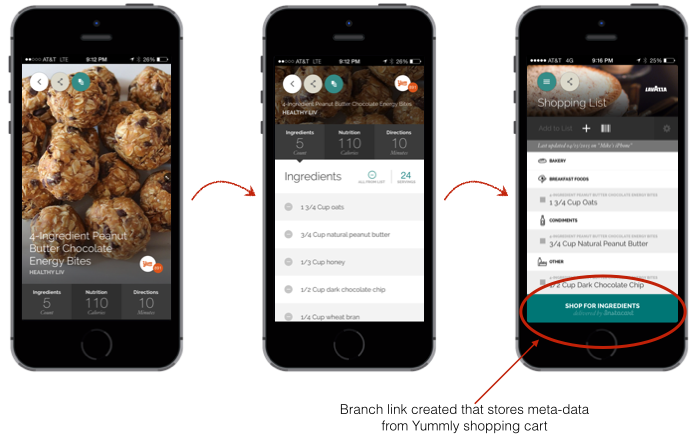 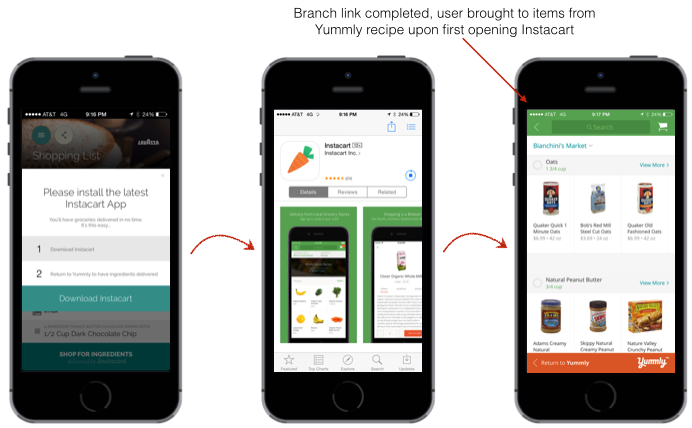 With Branch, the popular recipe app Yummly leverages Instacart, a grocery delivery service, to let their customers pick, plan, and pay for their dinner, all without having to leave their phone.

While the user is looking at a recipe, Yummly aggregates all of the ingredients they need. With deep linking, the user can click a button to add ingredients straight from the recipe to their Instacart order.

If they don’t have the Instacart app, they’re guided to install it. Once they do, their saved items are already added to their order.

With this function, Yummly has seen a 35% increase in one-week user retention. 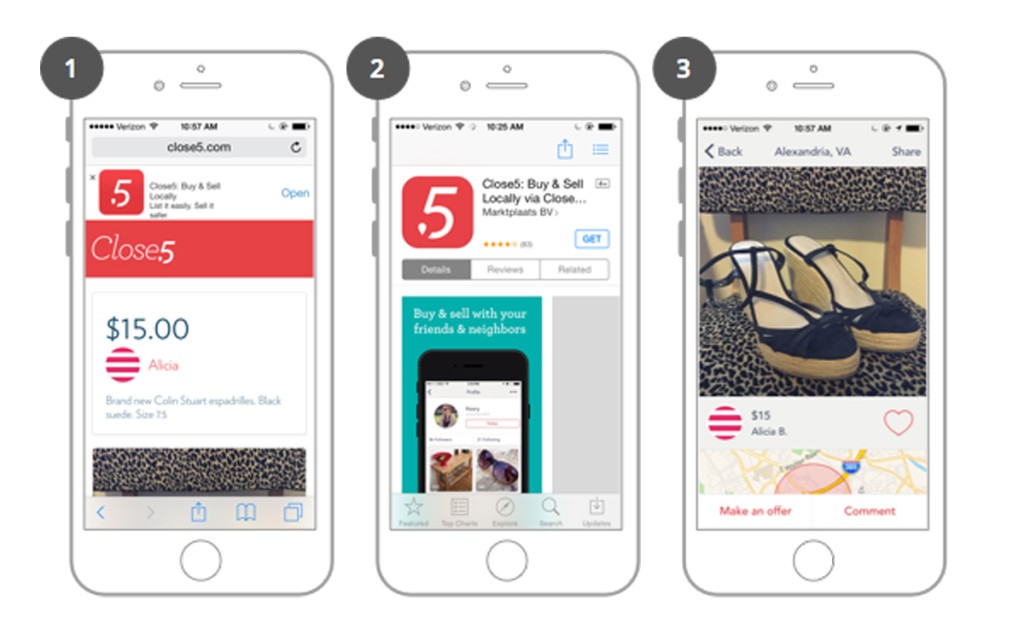 Close5 is Ebay’s version of Craigslist. Users can buy and sell items to people locally within the app.

To promote Close5, an Ebay user who’s browsing the mobile web view will see a smart banner with a call-to-action to install the Close5 app.

A smart banner is a banner that prompts users to open or install an app. It contains a smart link that includes all the routing logic to automatically open the app when it’s installed or fall back to an app store if not.

When a user clicks on the smart banner, they’re driven through the app store and land directly on the product page for the same item they were viewing on the web.

Since using deep links, Close5 has seen a 7.8x increase in links shared.

There is no shortage of content in our daily digital lives. We’re constantly bombarded with all things viral, so it’s hard to sift through the junk.

If you provide a content-based app, giving users a way to share your content directly with their friends is a perfect way to get more downloads and quality users who will realize upon first tap that your app isn’t part of the junk.

The Dojo app provides a location-based entertainment guide for London and Paris. When a user finds an event that they want to share with a friend, they just share a link.

When the friend clicks the link, they’re not taken directly to the app as in previous deep linking examples. Instead, Branch uses the Deepview feature.

Branch said, “It may seem counter-intuitive to add an extra onboarding step. However, this extra step gives the user more confidence in your app, making users 2 to 6 times more likely to install the app.”

Flipboard is a content app that lets users read news from various sources all in one place. They can also curate their own stories into digital magazines.

If Flipboard used deep links, users could share links to their own collections. When a non-user clicked the link, they would be taken through app install and right to the targeted content.

Branch said that in use cases like this, deep linked users are twice as likely to return as engaged users because they’re seeing the benefit directly after install.

Deep Linking Proves Your Worth Instantly

According to Go Globe, 85% of people prefer app experiences to mobile websites. So it’s critical to give users an easy way to use yours.

Equipping your app with deep linking is a way to ensure that users’ first experiences with your app are good ones, prompted by real-life need and shares from their friends. The more seamless the experience for your user, the less hassle there is in adding another app to their phone.

Images via Branch Metrics and Unsplash.

Code Review: What Is It and Why Is It Important?