A Beginner’s Guide to Growth Hacking

One of the startup buzzwords that you’ve no doubt heard a lot lately is “growth hacking.” Some see it as the anti-marketing. In fact, Morgan Brown, who cofounded Full Stack Marketing and leads growth for the Growth Hackers community, says that marketing can kill a startup. When done poorly, marketing can suck up a lot of time and money early on, when you’re still shooting in the breeze and have nowhere to aim.

But, if you’ve always thought that “marketing” and “growth hacking” were just different words for the same thing, others might say you’re right. The lines are getting more and more blurred, and some make the argument that they’re just different stages in the evolution of the same job.

Rather than pointing out what marketing isn’t, it may be more productive to define what growth hacking is.

What Is Growth Hacking?

Growth hacking is where engineering and marketing meet. We’re talking tracking, tracking and more tracking, which leads to rapid growth that goes as viral as possible for little money.

Growth marketers focus on the complete user funnel from “Awareness” all the way through “Referral” rather than just raking in users and letting the numbers stop there because the full product story goes way beyond the buy.

In his lecture, From User Zero: Lessons in Growing Startups from Scratch, Morgan Brown talks about getting started in growth marketing and how to begin from nothing.

Start with a Must-Have Product

If founders have said it once, they’ve said it a million times — you can’t build a good business from a bad product. Period.

This is a bigger deal for growth marketers than traditional marketers because a growth marketer won’t be on the outskirts of your team; instead he or she will be in the thick of it. This process is ideal for coming up with really genuine ideas for growth that will resonate with your audience.

Brown said that your growth journey starts with product-market fit and from there you transition into growth, and then actually attain growth. In fact, Sean Ellis, who coined the term “growth hacker” and cofounded the Growth Hackers community, says that product-market fit is the very first stage of your startup growth, which is followed by growth preparation and then scaling growth.

Native user acquisition starts with a story, so what is yours? Once you know your story, you can better find your audience and focus in on your mission.

A great example of a company tapping into where there audience lives is when Airbnb integrated with Craigslist. There was already a huge audience on Craigslist (tens of millions!). They simply added a button to a user’s Airbnb posting and made it easy to post right to Craigslist, without having to do much with the messy Craigslist interface at all.

Have a Tracking Plan

You’re going to be tracking way more than page views. You’ll want to keep tabs on click-throughs and signups, but it’s even more than that. In his Medium post about researching the world’s fastest-growing startups, Brown said that successful companies don’t just report on numbers. They gather insights from them and use them to grow.

There’s certainly no shortage of potential metrics and tools for measuring them out there. But if all you’re getting from the numbers is numbers, then you’re missing the point.

Having a clear cut tracking plan, like the one shown below, will ensure that you’re getting the most out of your analytics. (This spreadsheet was created by Segment and shared by Tammy Camp, Distribution Hacker in Residence at 500 Startups, in her AMA on the Growth Hackers site.)

The type of acquisition channel you should tap into is dependent on what type of company you are.

According to writer and entrepreneur Andrew Chen, not every product can be viral. That’s the case for SaaS products.

Marketer and entrepreneur Ryan Gum says that you have the best shot of going viral if your product is social in its nature, involves communication, or is something that people will naturally talk about.

If you can optimize all of your pages for SEO, that’s a good place to start for any business. Brown gives the examples of Quora and TripAdvisor as companies that benefit most from this channel.

If you fancy yourself a salesman, then over time, you’ll narrow in on your perfect pitch. But as you’re growing more and more, it’s just not feasible to rely on this channel for acquiring users through demos. 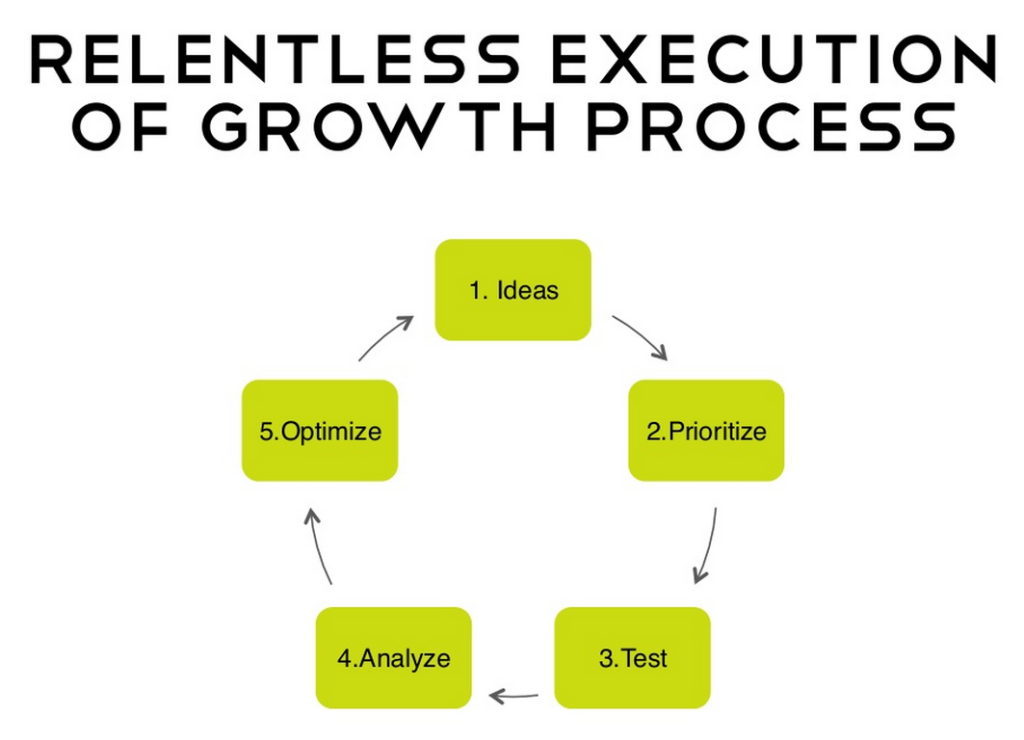 According to Brown, the whole process of High Tempo Testing starts with coming up with ideas, then moves to prioritizing, testing, and analysis before finally reaching optimization. Then it starts all over with a new idea.

You have to do this while you’re small because the more moving parts in your company, the more this process can get held up and the less mobile you become.

Brown also says to make sure that you’re not carrying the load of coming up with ideas all on your own because you’ll burn out, and probably miss some good ones.

At Growth Hackers, the system is to have a backlog of ideas at all times in addition to tracking current ideas and evaluating completed ones. You and your team should set a tempo goal — for the Growth Hackers team, it’s three ideas per week.

Your growth strategy doesn’t have to be set in stone, but you do have to have one. As long as you continue to evaluate your efforts and make tweaks based on the data, you’ll make progress by finding places where you can grow the most.

Feature image via The Stocks. Other images via Morgan Brown.