Did you know that American corporations alone spend over $2 trillion dollars a year on purchasing goods and services from small business owners?

Many qualified startups and SMBs ignore this market because they assume they’re too small to compete with large-scale vendors or too insignificant to sell to gigantic corporations. If you’d like to cash in on this sizable revenue stream, read on. 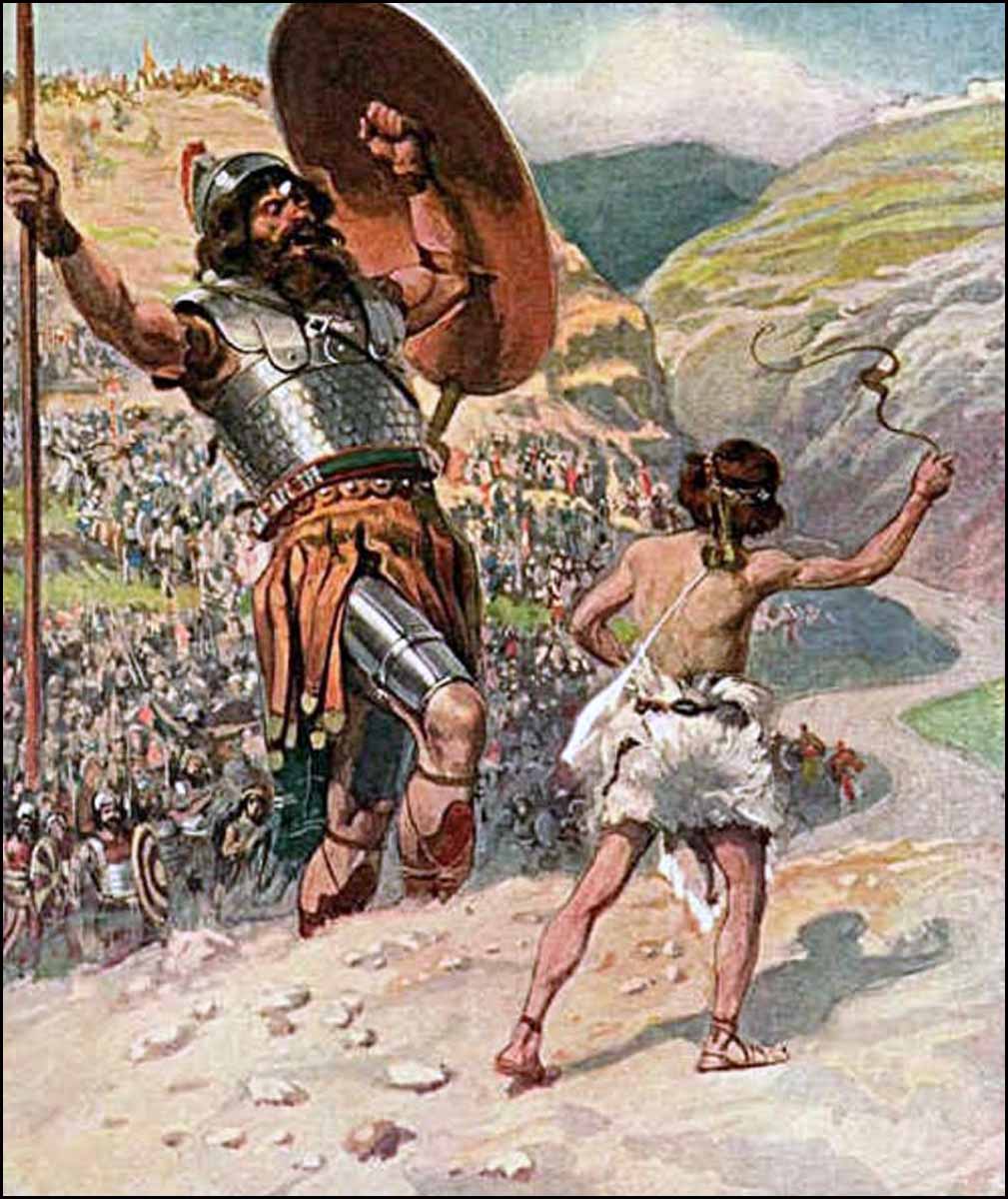 The David and Goliath fable is a perfect metaphor when it comes to this huge opportunity. No matter how small your company may be, if you have the ambition and right approach, you can bring down Goliath with nothing more than a well-crafted slingshot.

My own three decade consulting career of “giant slaying” proved to me beyond a doubt that the assumption of being too small to land corporate accounts is a myth.

In just my first three years as an entrepreneur, I grew from gathering business cards at Chamber of Commerce meetings to negotiating million dollar contracts. I successfully beat out Anderson, Deloitte KPMG, and many other mega-consulting firms competing in the enterprise workforce development market.

How did I do it? By not buying into the assumptions my peers and contemporaries bought into. The biggest barrier to landing lucrative corporate accounts is thinking too small and believing in a handful of myths.

Let’s explore a few, debunk them, grab our slingshots, and find some giants to slay.

Myth #1: “There’s no way around the gate-keepers.”

It’s inaccurate in today’s social media world to believe that key-decision makers are shielded by gate-keepers. Maybe 10 years ago it was true, but not today.

The challenge is not getting around anyone, it’s getting the right person’s attention.

If you know how to research, find, and engage corporate buyers, you’ll score big. If you don’t, your pitch will end up in their trash bin like the other thousands of wannabe suppliers.

How to navigate effectively is to position your very first inquiry in a way that is totally different from what others are pitching. Here’s a hint, be “interested” rather than “interesting.”

Corporate buyers are far more likely to respond to queries that show them you’ve done your homework, that you value their job position, and that you have questions (and solutions) that authentically address their company’s needs.

There’s a science to this crucial aspect of the sales cycle, which I call “strategic client profiling.”  You can learn more here.

Myth #2: “My company is just too small to compete.”

Nothing could be farther from the truth.

The reality is that corporations are actively seeking small companies to do business with. They actually prefer smaller vendors because they’re agile, hungry, and will bend over backwards to serve a client’s needs.

In terms of competing, if you know how to position your business in a way that corporate decision-makers expect to see it and can showcase your value angle, you’ll seize the competitive advantage.

This requires understanding “business case” development, “whitepaper” design, and program and product portfolio branding. Here’s a resource link with examples of how to craft these vital industry standards.

Myth #3: “There are too many qualified suppliers out there already.”

This is absolutely untrue.

Here is what you need to know about the internal workings of corporations and supplier retention: Every procurement officer I’ve ever known has a “list” of qualified suppliers, but taking a closer look at their list reveals that at least half of the entries have a question mark next to them with a little note, “This company is unreliable, find a replacement asap!”

I kid you not, reliable suppliers who are positive, motivated, and hungry are in huge demand. Is there any reason why you shouldn’t be one of them? The only reason I can think of is if you move on from this article without taking serious giant slaying action.

These mysterious purse-string holders are human beings, people who need to do their very best to meet their boss’s deadlines. There’s nothing worse for them than being the cause of a missed launch date because one of their suppliers failed to deliver on time.

If you can understand this point it will go a long way towards you gaining the competitive advantage over other “qualified” suppliers.

Myth #4: “It’s overwhelming, I wouldn’t even know where to begin.”

While this may be true as you consider slaying your first giant, I want to suggest something disruptive to you.

I’m not kidding about this. If you’re willing to be mentored by someone who has succeeded in the corporate arena, you won’t need to concern yourself with where to begin, they’ll show you. Second, if you follow their guidelines and do the required work, you will land lucrative corporate accounts.

But the real concern I believe needs to be addressed is how to keep a corporate account once you land it.

Out of all the fellow entrepreneurs I’ve ever competed against or partnered with over the years, more than 75% of them failed their first time out. Why? Because they were too busy focusing on trying to make sales and not busy enough ramping-up their delivery reliability.

All it takes is ONE, and I mean ONE missed deadline with your corporate account manager and you will be finished … and not only at that company, but at all those companies your account manager posts their comments to on social media.

I’d like to stress one last point before grabbing our slingshots. You can try to do this on your own — I love getting things for free — but if you do, be advised that blowing your first corporate account has a much greater cost than does losing a single individual client.

The money you invest in wise mentoring will more than pay for itself in terms of time saved and revenues generated. And that’s not a sales pitch, it’s a reality as I’m speaking from personal experience. I tried my first pitch on my own and lost a $275,000 contract because I didn’t know the difference between a business imperative and a business goal.

Why would just one word have such a huge impact? Because ignorance about industry-standard syntax reveals that one does not know what one is talking about … and when a giant gets wind of this kind of incompetence, they’ll squash it like an ant. 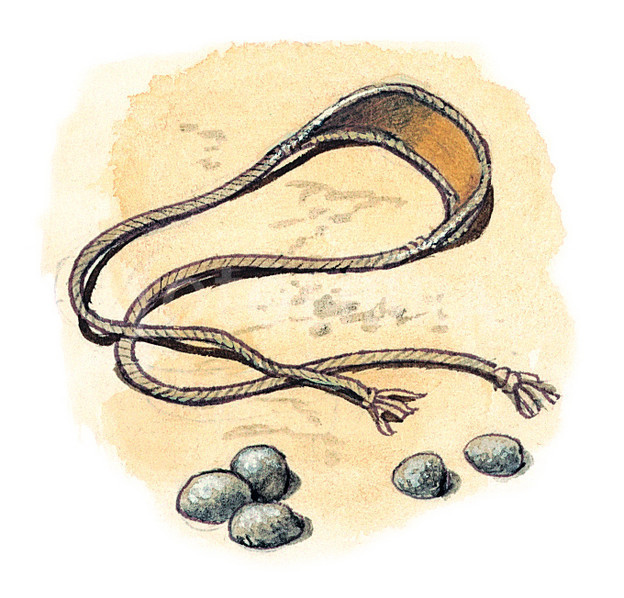 Now that we’ve debunked the myths and touched on some of the vital points for success, let’s explore the David and Goliath metaphor and its key take-aways, or what I call David’s Seven Secret Weapons.

To begin, David may have been a risk-taker, but he was also a really smart warrior. You see, he knew he couldn’t scale up to the size of Goliath, so instead he scaled up his internal capabilities by leveraging seven key leadership traits, or what I fondly call “secret weapons.”

Let’s take a look at them now:

David wore no heavy armor, but rather a light and highly flexible tunic, satchel, and sandals.

The lesson: Scaling too fast, becoming burdened with overhead, and not being fast of foot is a real business killer.

Everyone pressured David to take a sword into battle, instead he chose his trusty slingshot.

The lesson: Stay true to yourself and your talents, be forthright, and stay honest no matter what.

Rather than believing it was impossible, David saw it was possible to slay the giant, which led to him realizing where Goliath’s weak spot was.

The lesson: It’s impossible to make the impossible happen. But the possible, now that’s doable.

Goliath had a filthy mouth in addition to being unbathed. But, rather than becoming reactive to the giant’s threats and slanders, David remained humble.

The lesson: Don’t become arrogant about arrogant people. If you do, you’ll become just like them.

Not religious faith, but rather a humble self-trust and confidence David had in terms of being up for the challenge.

David used the power within a simple swinging slingshot and wielded it with great precision.

The lesson: Use your supporters, resources, and allies for momentum and your enemies to true up your own weaknesses. Only your enemies will tell you the truth about your short-comings; your friends are just too nice and those on your payroll want to keep their jobs.

David knew Goliath’s forehead was his weak spot, he knew how to hit the target zone with everything he had, and on the very first throw.

The lesson: Know your market niche, your customers, what they need, and how to deliver it with precision, speed, and power.

Go Forth and Slay

Alright, I’ve equipped you with the Seven Secret Weapons, now get out there and start slaying.

If you find you need support or mentoring, let me know or find it elsewhere, I don’t really care. What I do care about however is being part of an Army of Davids who know there is a greatness residing within them that is bigger than any external giant or life challenge they will ever face. That’s what inspires me.

Now pull back on that slingshot, take aim, and swing with everything you’ve got!

Building for the Enterprise: How to Develop Internal Tools for Your Company

Val Jon Farris is a senior mentor for Richard Branson’s XTC, Extreme Tech Challenge, competitors and CEO of Diamius Multinational, a Fortune 100 consulting firm specializing in working with successful business leaders and founders. You can read more of his work on The Huffington Post.