Groove CEO explains how to design mobile apps for women the right way. Hint: If you’re incorporating flowers, hearts, or dolls, you might want to re-think your design.

When my company, Groove, set out to build a period tracker, we knew we were in for a challenge.

Search for apps that target female customers, and you’ll find yourself bombarded with flowers (along with other various flora), butterflies, hearts, cutesy fonts, and every shade of pink you can imagine.

As a woman, finding a great app can feel like trying to purchase a respectable vehicle in the girls section of a toy store.

Gendered products have saturated just about every market, apps included.

Do women really love pink, “girly” things that much? We’ve found the answer to be a resounding “no.”

Women want better, and it’s high-time developers start delivering better. Below is a list of seven surefire tips that will help any developer to design a kick-ass app for women.

Oddly enough, designing an app for women looks a lot (read: pretty much exactly) like designing for anyone else.

The big difference is that apps made specifically for women are still stuck in the Stone Age — they’re riddled with subtle sexism, Barbie doll designs, and other tired clichés and stereotypes.

Approaching the design from this angle helped us to avoid many of the mistakes (and design faux-pas) made by other developers who design for women.

Many newbies developing apps for women fall into the trap of assuming users like the apps that are already out there.

Download and open any of the hundreds of period trackers, and, more than likely, they’re all relatively indistinguishable. Is that because users genuinely like the way they look or because they’ve simply come to accept the fact there’s nothing good out there? My guess: the latter.

If you want your app to have broad appeal, don’t expect homogeneity among your users. When mocking up your design, assume variability in gender identity, sexual orientation, likes, dislikes, etc.

In other words, design for the real world, not for the “norm.” Taking this approach will likely lead to a vastly different design than the assumption that every user wants a Barbie-inspired app.

It’s also helpful to ask yourself, “How would I design this feature if this was an app for everyone, not just for women?” Again: design for people.

A huge pet peeve of mine when clicking through other period trackers was not being able to customize which data fields appeared on my data screen. They were only designed for a single use-case. But not all period-wielders are interested in being asked about pregnancy tests and ovulation predictor kits every time they enter data.

We avoided this by not making assumptions about our users. We eliminated gendered pronouns and built our app to intelligently adapt both the educational info and data entry fields for each individual user. 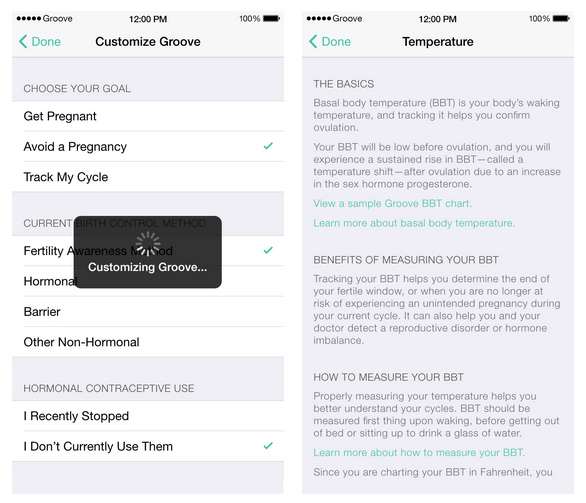 If you’re a member of society, you’re biased.

Bias affects our decisions whether we like it or not. If you think you’re somehow immune, I hate to tell you, but you’re probably wrong.

When you’re designing an app in a sea of already heavily-biased designs, it’s more important than ever to go out of your way to recognize and constantly challenge your biases.

You might be rolling your eyes at how “PC” our world has become. But checking your bias isn’t about being politically correct; it’s about understanding and respecting diversity. It’s about creating products and designs people love.

That’s why every feature we add to the Groove app is meticulously designed. We’re careful to ensure that any language we use can’t be construed as offensive or sexist (even subtly). And we’re hellbent on our app not contributing to or perpetuating stereotypes of any kind — we like to think we’re helping to break them.

Incorporating this into our design process has been humbling. It has not only helped us build something that people are legitimately delighted to use, it has also helped us grow both as designers and as individuals.

4. Use Reviews to Guide Decisions

Reviews are a great way to gauge how your app is faring once it goes live, but they can also help guide design decisions before you ever submit it.

But doesn’t no app = no reviews? Well, yes, but you’re bound to have a competitor or two. Even if it’s an indirect competitor, reading their customer reviews is an invaluable exercise.

Not only can you find out what their customers like about their app, but you can also learn what they’re doing wrong, which is ultimately even more important. Make a list of things their customers don’t like, and, as obvious as it sounds, don’t do those things!

In our case, the complaints about competitor apps ranged from having too much pink, to too many flowers or butterflies, to sexist icons or design elements, to subtly (or plainly) offensive language, to confusing interfaces, to designs that resemble Barbie packaging. So we went out of our way to exclude each one. 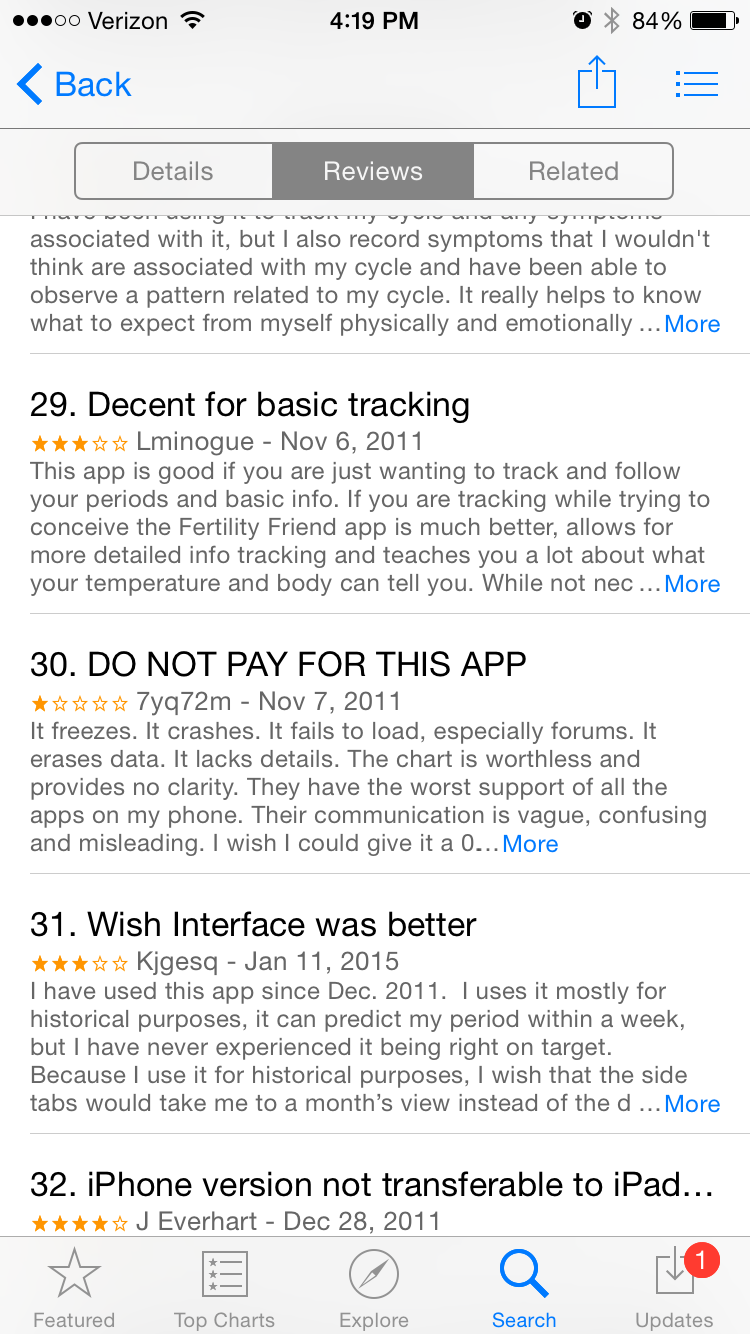 5. Design From the Ground Up

Having competitors is usually a sign that you’re onto something, but distinguishing yourself is vital if you want to avoid blending in — especially in period-tracker land.

A great way to set your app apart is not to let competitor apps influence your design. It can be tempting to mimic a fairly successful competitor in hopes of making your own app successful, and I’m sure this works in some cases. But if you really want to stand out, avoid mimicry at all costs.

We took the same approach at Groove. We were constantly asking ourselves “Are we doing this because someone else did it or because it’s actually the best way?” We still design every new feature this way.

Not only has this led to what we think is a killer design, but it prevents new features and functionality from feeling like an afterthought.

More often than not, the ground-up approach leads to better design, cleaner interfaces, and less confusion about how to use your app. Mailbox and Clear make this, well, clear. 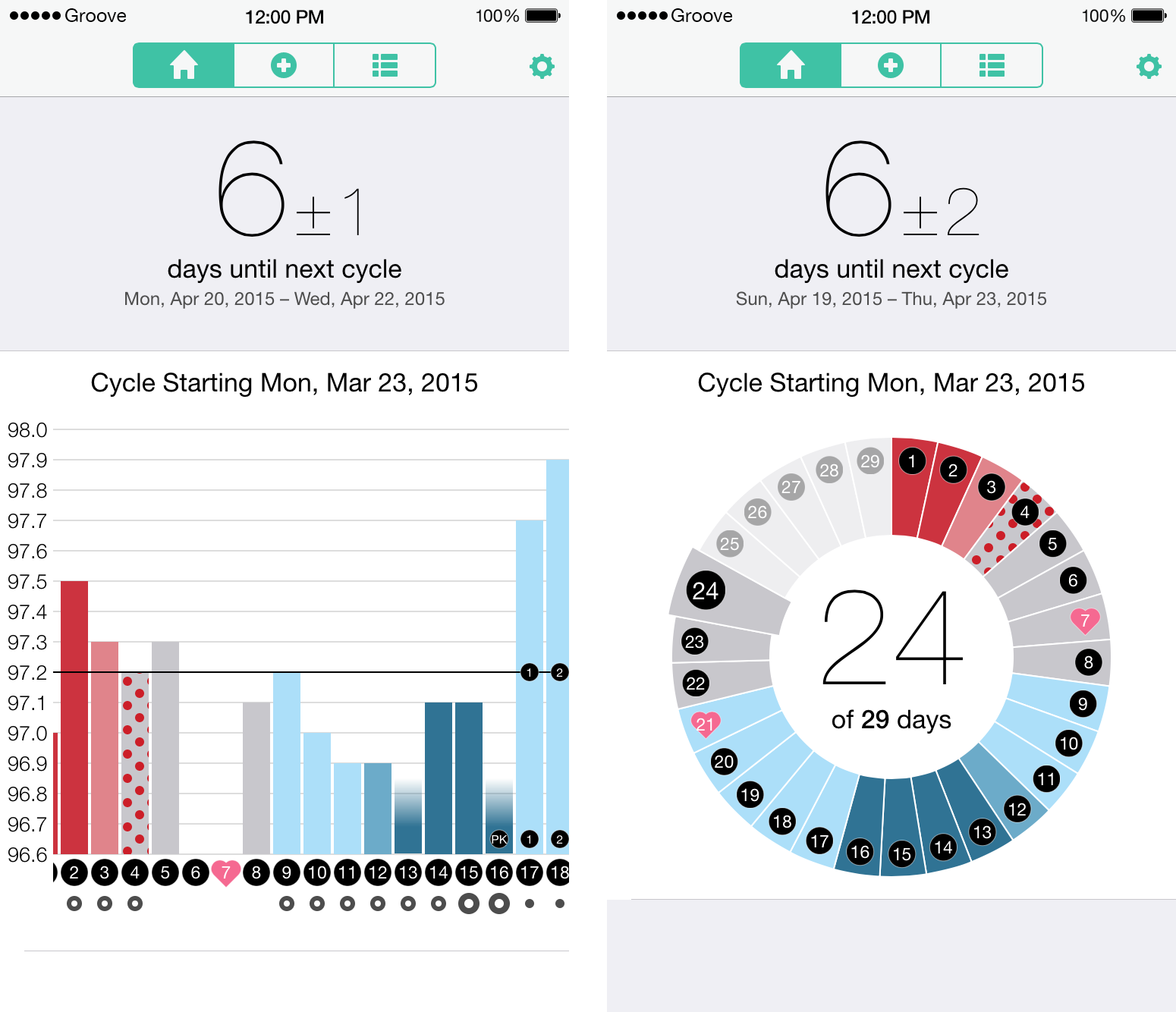 6. Talk to Your Target Audience

While people may not always know what they want (e.g. we didn’t know we wanted touch screens before they existed), talking to your target audience can give you a great sense of what they’re looking for in an app.

A really bad way to do this is to list off a bunch of features and ask a potential user which ones they’d want. Instead, ask them to describe their ideal solution, and then find out what they don’t like about existing solutions. This, coupled with seeking diverse opinions, can help you hone in on your design.

Be cautious, though, not to build exactly what people want. Because, more than likely, people will tell you what they want based on what they already know. I’m guessing Clear’s developers probably didn’t find too many potential users who were just dying to swipe their list items left and right.

If we had listened to every suggestion we heard, we’d have dozens of features that aren’t currently in our app — features that nobody has ever complained about not having.

Don’t assume you can tap out after your totally awesome and amazingly-designed app goes live. Listening to your users and providing top-notch customer service can go a long way.

I can’t even count the number of period trackers that only push updates once or twice a year. Trust me when I say that it’s not because they’re perfect. Frequent iteration will give your app a reputation for greatness: great design, great usability, great customer service, great updates.

Greatness is exactly what you need to set yourself apart. Now go out there and use these tips to design a badass app for women … or for anyone else.

Jennifer Aldoretta is the “Co-Groover” and CEO of Groove, a startup that helps women learn about and manage reproductive health and fertility. She is passionate about the intersection of technology and women’s health and is obsessed with great design, growth hacking, and empowering women through education. You can learn more via her website.