The art of carrying around a recorder to take voice notes is rightfully buried with our tape decks, but that doesn’t mean that we shouldn’t revive the habit.

Skyro is an audio recording app on Android that lets you add images to each recording. It’s ideal for tracking meetings, lectures, and events you want to remember.

Reading this, you may wonder, “What’s the big deal?” You may think, “This has probably been done before.” But it hasn’t been done like this.

Skyro creates an extremely fluid, well-designed experience, and you’ll find yourself trying to discover new ways to use it all the time.

Founder Soham Mondal joined the consulting team at Cisco right out of college, but he found that he was really missing out on creating things as a software developer. To get back into the groove, he started attending the Bangalore Android User Group meetups and decided to leave Cisco in 2012 to work on Skyro full time and create his own company called Triveous.

Mondal talked to us about how his own need for better audio notes has led to a beautiful new way to track life.

Mondal said, “I take a lot of notes, mostly voice notes because I am too lazy to type or write.” While he was in the midst of learning Android and needing to take more notes, he created an audio recorder app to solve his own problem. Before he knew it, other people were starting to download his personal project, so he started to take things more seriously.

“A lot of Skyro’s current feature set comes from problems that our users or we face in the real world,” Mondal said. In the early stages, it was simply an audio recording app, but as Mondal and his team were using it more and more for meetings, they found that they were wanting to add images.

With the image feature, you can simply snap a pic while you’re recording to capture visual aids in the moment. When you play back the recording, the images show up at the exact moment that you took them. When recording, you can capture audio in mp3 or uncompressed wav formats and auto-sync with Dropbox.

In 2012, Skyro launched in beta to a limited audience at Google IO where Mondal said they “got some great feedback from a bunch of great developers.” They’ve even been featured in the Play Store. 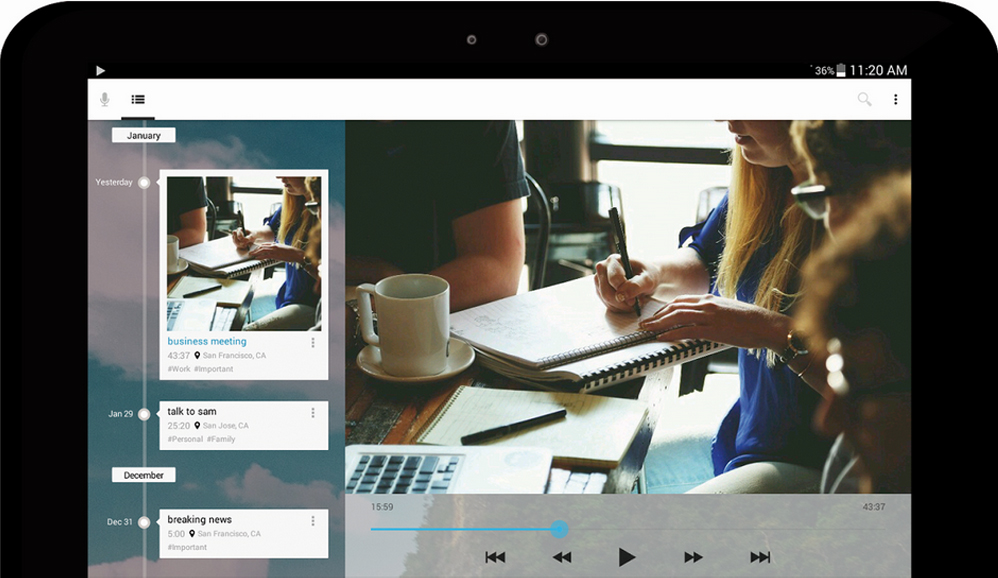 With Skyro, Mondal wasn’t just learning how to build an app for Android, he was also learning how the Android audio system works.

He said, “Understanding that and navigating those constraints was probably the first challenge in the process of creating Skyro.” Apparently Android’s audio subsystem isn’t well documented, so it can take a long time to find the information you’re looking for.

Unlike other types of app crashes, Mondal said that, when an audio app crashes, it can cause users some extra frustration. “When an audio recording app fails to record even a minute of an important conversation, odds are that you get extremely angry and are likely to curse at the app in the comments.”

It would be like your camera crashing during your kid’s recital — one of  those moments when tech fails render you hopeless. 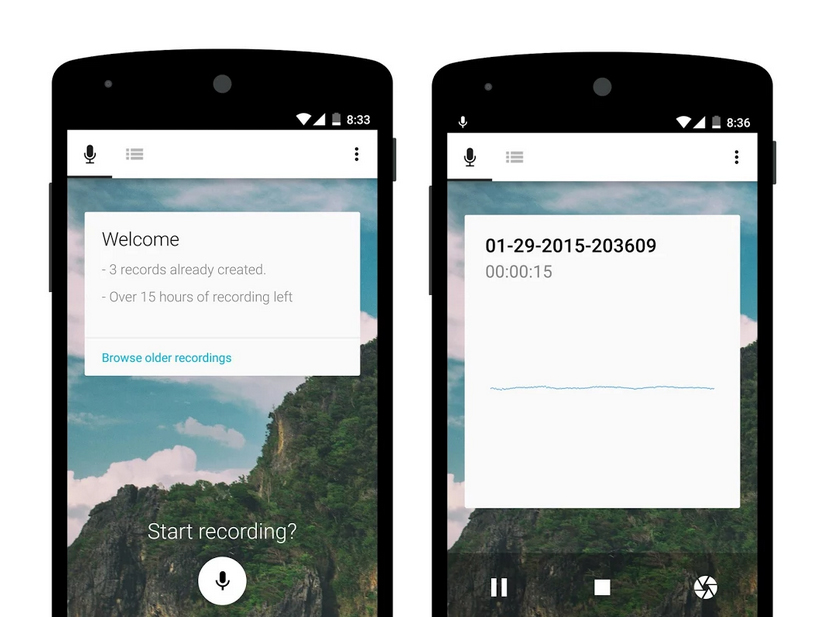 A Focus on Design

The other big challenge for Skyro was ensuring that it worked (and looked) great across multiple devices. Mondal said, “We really believe in creating a clean, simple and functional user experience.”

If the user experience is what draws people in, it’s the simple, thoughtful features and minimal, rich design that keeps them engaged.

In addition to adding images to your recording, you can enable geo tagging and also tag your recordings with words that are helpful to you. For example, if you record your class lecture every week, you can add a new tag for each class.

The design is a clean, card-based approach showing all of your recordings on a timeline where it’s simple to listen to the audio and view the images in a presentation format. Only time will tell if they add a social feature, but, as it is, the app feels very personal, almost like an audio journal.

The lack of “feed” isn’t so much an absence but a much-needed breather from all of the other socially-driven apps where you can document your life. Although, even with the addition of a social feature, it’s certain that Mondal’s attention to detail would keep the design feeling airy and sophisticated. 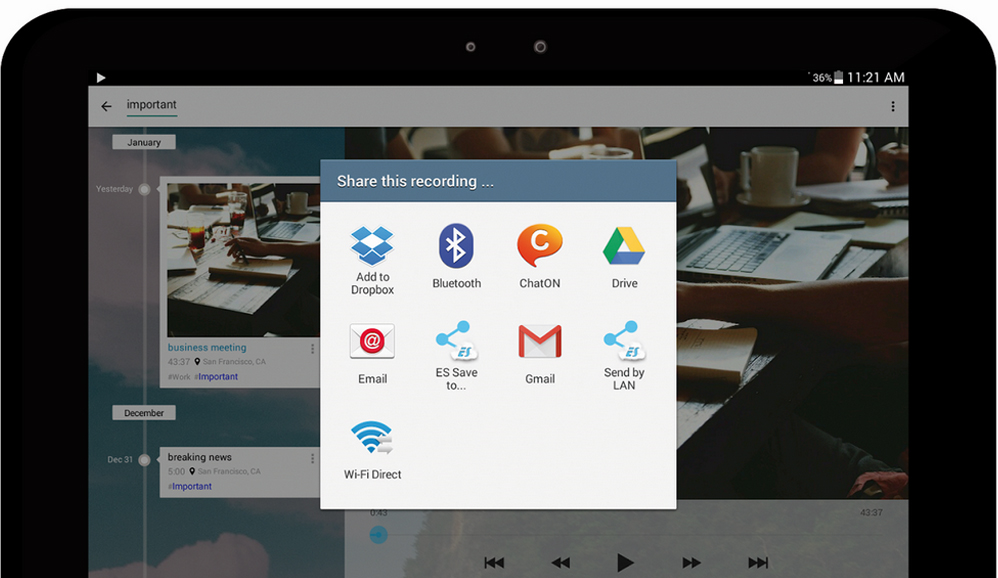 A couple of weeks ago, we interviewed the founders of the audio app trio Cord, Chhirp, and Shhout. It’s clear that there’s something exciting afoot in the world of audio.

Mondal thought that people would use Skyro most often to capture audio notes, but “[a]s time progressed, we started finding out that people tended to use it a lot for meetings, lectures, and music.”

“We’re always being surprised by how users use Skyro,” he added. “For example, very recently we had a discussion with a user who was planning to use it in a midwife healthcare scenario in Africa as part of an initiative, and that seemed very interesting.” The app is most popular in the US, Brazil, and China.

Sound is still a largely untapped medium in our quest to remember and chronicle every moment of our lives. We’re bombarded with options to capture and share visuals of important or memorable things that we’re experiencing, but audio could be a missing piece. Mondal says,

When a video won’t cut it and image is no good, audio is an understated way to share the moment. Maybe in the future we’ll see fewer people with selfie sticks and more people with mobile microphones. 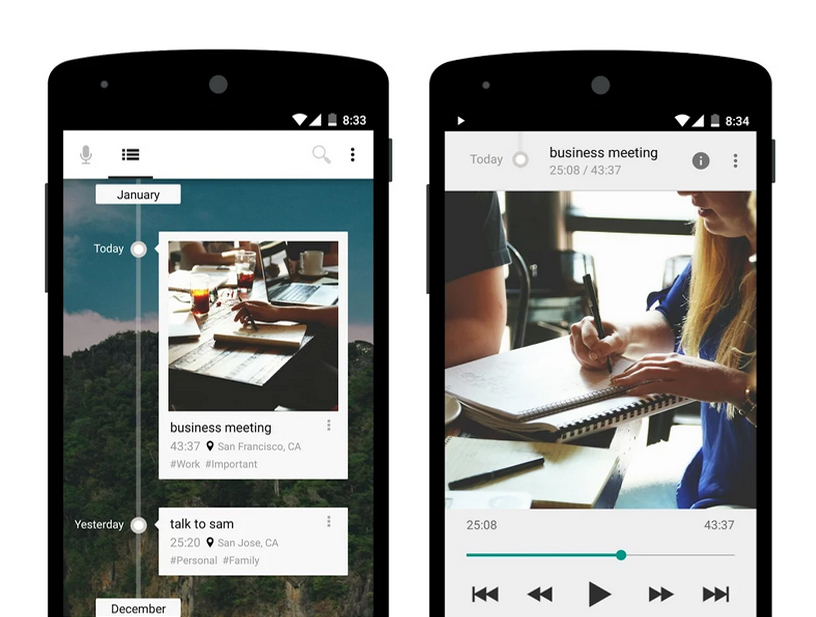 Mondal is going to continue to focus his company Triveous on perfecting Skyro detail by detail. He said, “In the near future, we’re adding a bunch of cool features like Skip Silence, customizable widgets, microphone selection, Android Wear support and so on.”

While you can currently share your recordings pretty easily, they’re looking to simplify the process even more — that will be their main focus in the coming months. Mondal said, “Expect a lot of cool stuff in that area.” As the Triveous team continues to grow with their third member, it seems that this will increasingly become an audio favorite on Android and maybe even iOS.

If you want to start recording, you can download Skyro for free on your Android tablet or smartphone — it looks great on both. The Pro version is $2.99.