Creating an app for the Apple Watch before it’s even released is difficult, but not impossible.

Smartwatches are the beginning of a whole new realm of wearables — the Internet of Things is slowly becoming less niche and more all-encompassing. With the launch of the Apple Watch right around the corner, we’ve really started focusing in on what exactly you can do with these devices.

The fact of the matter is, Apple CEO Tim Cook laid out some really useful, fun features at his keynote. But the degree of how useful and fun the watches turn out to be has a lot to do with the apps you can use on them.

How can we enhance our everyday lives by bringing our smartphones to our wrists? How can we feel less tied down by tech and more empowered by it in a way that’s not super invasive and consuming?

We believe that reaching that perfect balance is all about creating smartwatch apps that are innovative and powerful yet simple to use. So we’re perfecting our own Apple Watch app team, as well as chatting with people who have gotten a jump on building their own.

Together, we’re starting to get a feel for smartwatches’ potential and narrowing in on what exactly we can accomplish within this new realm of apps.

In our new series of case studies leading up to the launch of the Apple Watch, we’re talking to people about how they’ve created apps for a device that no one has, right before everyone has it. 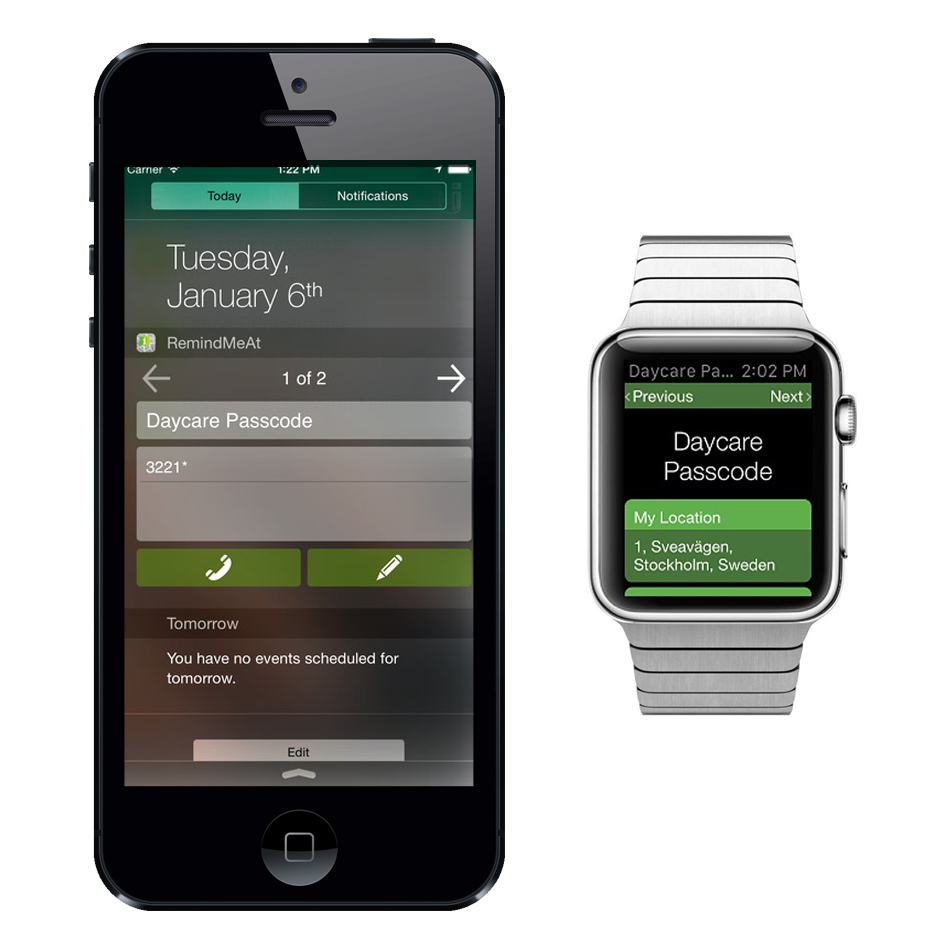 In November of last year, he had an idea for a simple iOS app that would help a lot of people. It’s called RemindMeAt and is basically a location-aware notes app.

When he noticed many parents at his kid’s daycare fumbling around for updated codes to get in the door every morning, he thought that if these notes popped up when you needed them (even before you realize it) that it would solve a big problem beyond the daycare. It could remind you of what to pick up when you get to the grocery store or even remind you to make a phone call when you get into work.

Knowing that the Apple Watch release is only a week away, you may be thinking, “Duh, this is the perfect app for a smartwatch.” But Löwgren started out with a focus on iOS so people could get a good handle on that first. 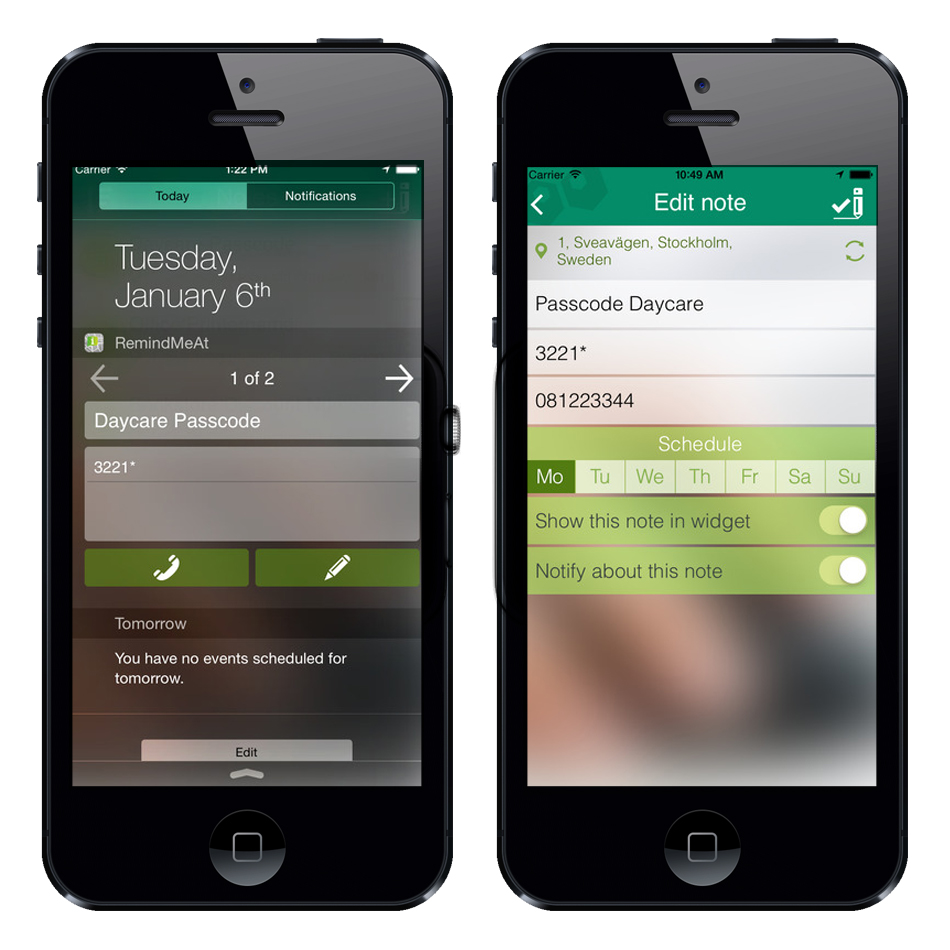 Just as many of the greatest apps begin, Löwgren created RemindMeAt for his own, personal need. He found that there was no other app out there with the functionality he was looking for, so he set out to create one himself.

He said, “I primarily wanted to use the app on the new iOS 8 widgets.” In fact, he said you should only have to go into the app itself to create or update a note; otherwise it should work for you completely from the widget and notifications.

To start building the app, he recruited and hired a team of six freelancers in Ukraine to work with from his home in Sweden. They started with iOS and then moved to the Apple Watch in three phases:

Test the idea and the basic functionality of the iOS app and get it to the App Store. At the most basic level, he wanted the app to send a note at certain locations within a widget, and he wanted to completely understand the full Apple approval process. All of this took three weeks.

Next came adding initial features and making adjustments based on what they’d learned after the first version.

3. Focusing on the Apple Watch

The third version of the iOS app was added to the App Store in April with Apple Watch support. So, if you’re one of the lucky folks who are picking up the Apple Watch first thing on April 24, you’ll be able to (and definitely should) download RemindMeAt. 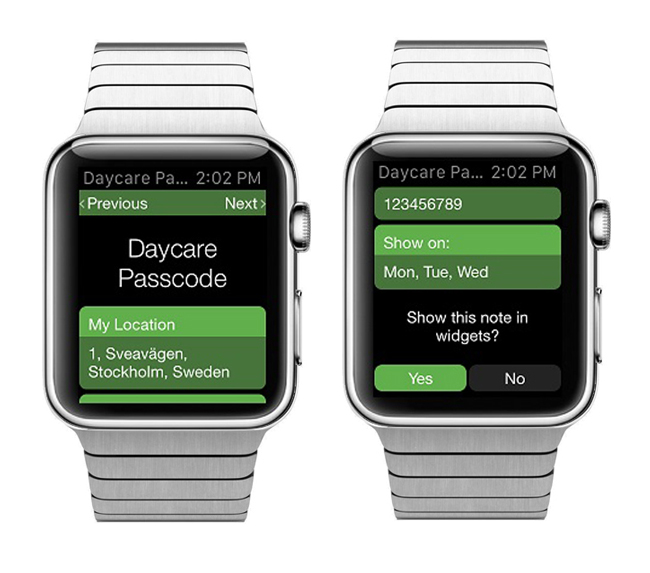 Löwgren admits that there was a lot of uncertainty in building an app for technology that wasn’t even released yet. He said,

“It was very hard to know how I, or anyone, would actually use the Apple Watch. I had to imagine an Apple Watch and how I’d like it to work, pretty much based on the Apple announcements. I had no guidance from what other apps usually look like, [how they] function, or from my own experience of what works or not.”

It’s true that in the app space, where it seems like everything is a version of something else (Tinder for Twitter, Airbnb for 3D printing, etc.), it can be a bit nerve racking to create something truly from scratch. But Löwgren said, “On the other hand, it is a great opportunity to be one of the first and to learn a lot.”

His justification for bringing RemindMeAt to the Apple Watch is simple enough. But a good test for you to decide if your idea merits a watch app is to ask yourself:

Is this an app that’s equally, if not more useful on a watch than it is on a smartphone? And is it something you obviously can’t do on a “dumb” watch?

Ultimately, Löwgren’s approach was to focus on functionality with this flagship version of the RemindMeAt app on Apple Watch. “It is a big risk to develop for something you’ve never tried yourself,” he said. “So I took the approach of creating an initial version [that’s] as simple as possible.”

Fairly early on in the RemindMeAt project, Löwgren knew that he wanted to support the Apple Watch with the iOS app. That way, when the device was released, he wouldn’t have to rework his base functionality altogether.

But he ran into an issue when the first version of the app was developed for the 8.3 iOS beta and then Apple released an update that didn’t support all of the APIs.

The next hurdle, Löwgren said, was the Apple approval process. It’s well known that Apple’s app approval process isn’t easy, but Löwgren said that for the Apple Watch (at least at the time), they didn’t have any parameters for what they would and wouldn’t allow. So, they were building the app based only on rumors and speculation.

“I was nervous during the process, and glad when it was finally approved!,” he said.

From Product to Promotion

It’s easy to get caught up in making something and then realize that it takes even more work to tell people about what you’ve made.

“I started off with a very naive idea that the app should just magically sell itself,” Löwgren said. “[Then I realized that] I had to promote the app and this was perhaps [more] work than creating the app.”

This can be especially tricky when you can’t even give the media an exact launch date, because up until recently no one knew the day the Apple Watch would be released. Löwgren didn’t like waiting through Apple’s release delays, but he said that the silver lining was being able to use that extra time to perfect his product. 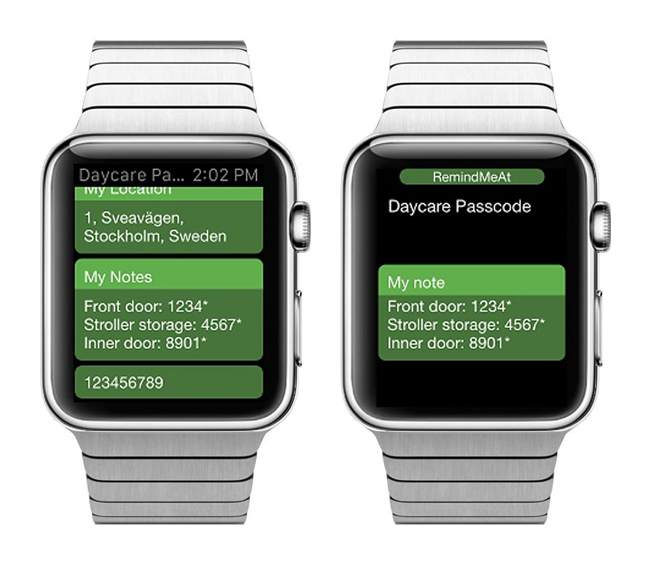 After developing his own RemindMeAt for the Apple Watch, Löwgren has some opinions of what the perfect watch app entails:

He thinks they should display only the need-to-know info. “More complex functions should be put into the iPhone app.”

He’s found it helpful to “build iterative[ly] and easy to begin with, and ramp up with new functionality later as you see the usage of the app increase and you learn the capabilities of the Apple Watch.”

When your alerts move from your smartphone screen to your wrist, it’s going to get old really fast if you get pinged for every RT or reply-all email.

Löwgren said, “I believe in the early Apple user interface guidelines, where a user interface was compared to when you’re on a date in a restaurant and the waiter comes by and interrupts you. It is critical that the waiter has something really important to say, otherwise you will be very irritated.”

Measuring your heartbeat and physical activity is probably only the beginning of what you’ll be able to track with the Apple Watch. Löwgren said that he’d like to use some kind of tracking technology for an app in the future.

Of course, the Apple Watch hasn’t launched yet, so it’s hard to to learn any major lessons quite yet. But Löwgren said that he really wishes he knew more about promoting the app before starting.

“I think I would start with promotion next time, to learn from potential users what functionality they need or like.”

He said that exploring new methods of promotion did help him to narrow in on the best tools and processes before deciding to scale. It also helped him to avoid wasting any money on excess marketing.

After starting the app production, he also learned about the different options for tracking app usage. “For instance, there are many apps that use Facebook’s APIs to learn how different functions of an app are used,” he explained.

This could have helped in deciding whether to charge for the app or go with a free model. He said, “Maybe I will try to do a free app next time.”

What’s Next for RemindMeAt on the Apple Watch?

Löwgren wants to add sharing capabilities to RemindMeAt on the Apple Watch. He’s had people asking for translations of the app, so he wants to tackle that soon as well.

For the moment, he’s waiting for the product to launch and then he’ll move forward from there.

“The next big thing is how the app will actually work in real life, and if my users will like it. It will be very exciting to get feedback when the Apple Watch is available.”

Customer Churn: Why It Should Be Your Most Important Metric